The Criterion Collection // Unrated // July 28, 2009
List Price: $39.95 [Buy now and save at Amazon]
Review by Stuart Galbraith IV | posted July 15, 2009 | E-mail the Author
Roman Polanski's first English-language film, Repulsion (1965), was considered almost unbearably creepy in its day and the picture is still unsettling here and there. It remains hugely influential; Japanese and Korean horror films owe a lot to it and the other two films in Polanski's "apartment trilogy," the more mainstream but hugely successful Rosemary's Baby (1968) and The Tenant (1976), a thriller quite similar to Repulsion and in this reviewer's opinion much superior, though it was less the watershed work this was.

Up to now the film has had a spotty home video history. Some years back Koch Vision released a DVD version with probably the ugliest, most inapt cover art of all-time (see below) with a transfer to match. There were import versions of varying quality, but Criterion's new Blu-ray release is by far the best of the bunch, though even it's not perfect. The extras are excellent but for a change not overwhelming. There's been a tendency recently to overwhelm the viewer with supplements that too often overlap material and rely on same film excerpts. These, by contrast, are well-chosen and just enough to be completely satisfying. 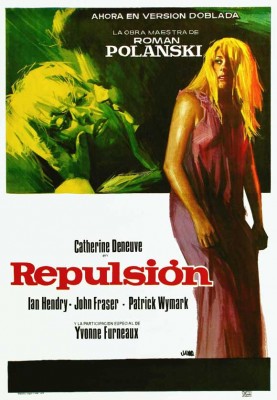 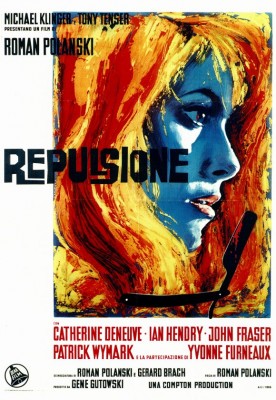 Carol Ledoux (Catherine Deneuve) is a demure, French manicurist working at a large London beauty parlor. She lives in a Kensington mansion flat with her older sister, Hélène (Yvonne Furneaux), who's carrying on an affair with Michael (Ian Hendry), an apparently wealthy but married man who frequently spends the night. (Hélène's off-screen orgasm may be a movie first.) Colin (John Fraser) is attracted to Carol but her strange behavior - mousy inexpressiveness, an aversion to all forms of affection, sudden catatonicness - keeps Colin at bay. Meanwhile, the landlord (Patrick Wymark) is after Hélène about the rent.

Hélène and Michael sneak off to Italy for a fortnight, leaving Carol all alone in the apartment. It soon becomes apparent that Carol is psychotic, possibly schizophrenic, possibly unable to cope with repressed memories of a past sexual assault. The film is ambiguious, partly because most of it is told from her paranoid perspective, with most of the picture showing Carol shutting herself away in her flat threatened by one traumatic hallucination after another.

Repulsion is extremely well-made and imaginative, but also highly derivative at times and self-consciously arty. The latter may have been a response to the glut of British-made and Euro-horror films flooding the market in the mid-'60s; Repulsion wants to be taken seriously (Polanski says he aspired to make something that was "not just a cheap horror film"), and as a result is overemphatically arty at times. The film draws upon numerous influences. Maruice Binder's opening titles amusingly imitate Saul Bass's title graphics for Alfred Hitchcock: credits glide over the surface of Deneuve's eyeball, seen in macro-focus close-up, like Janet Leigh's in Psycho (1960). (It's a neat design, however derivative.)

Threatening human arms sprout from the walls like those in Cocteau's Beauty and the Beast (1946) while other horrific moments, implied rather than implicit through the use of slow zooms, subtle sound effects, etc., have their origins in the films of Val Lewton, Jack Clayton's The Innocents (1961), and Robert Wise's The Haunting (1963), most of which also feature psychologically troubled women. For instance, one shot of some plasterwork on the ceiling is lit and the camera slowly zooms in on it quite like a nearly identical sequence in The Haunting, in which a piece of woodwork similarly (but not explicitly) suggests a ghost-like face.

Nevertheless, the film is highly effective and has its share of original and very disturbing concepts. Polanski has a knack for making mundane sights viewed out apartment windows seem menacing. Here it's a convent next door, where nuns are seen at a distance playing outside. Similar shots, even more creepy, turn up again in Rosemary's Baby and The Tenant. A rabbit carcass, intended for a meal but left in the refrigerator by Hélène, gradually rots away over the course of the film, and almost becomes a central character, and which may have influenced the design of (among other things) the mutant baby in David Lynch's Eraserhead (1977). (When the appalled landlord comes across the nearly-mummified Leporidae, Wymark delivers the film's funniest line: "It's the dustbin for you, my lad!")

Some of Polanski's most disturbing images are the simplest: late in the film, when it's obvious to all that Carol is completely unhinged, there's a shot of her complacently ironing clothes as she quietly hums to herself. Polanski slowly tilts the camera down, revealing the her iron isn't even plugged into the wall.

Deneuve was just 20 years old when this was made. She's awkward and her English is rudimentary, both of which prove to be an asset to her skittish character. She's not wooden but instead some of her subtle gestures are clinically authentic. She's also a good match with Furneaux (Hammer's The Mummy, La Dolce Vita, the title role in Helen of Troy) who, at 37, is glamorous but past her prime, making her relationship with the unsavory Michael all the more believable.

Unlike The Tenant, which is soaked in jet-black humor, Repulsion is pretty humorless, though it does poke fun at British ways: a fish & chips lunch that Carol finds, well, repulsive, and several scenes feature character actor James Villiers, who specialized playing stuffy, erudite types, here is at his most twittish. 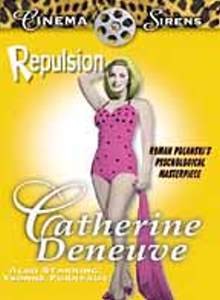 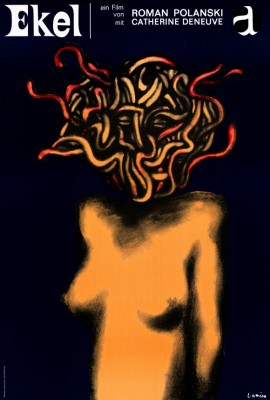 The transfer, derived from some combination of the original camera negative, a 35mm fine grain composite master positive, and a dupe neg, has great contrast, a pleasing but not overwhelming level of fine film grain, and is so razor sharp at times you can count the freckles on Deneuve's face. More importantly, like all good high-def transfers it brings out the subtleties of the actors' performances in ways standard DVD cannot, particularly the expressiveness of their eyes, and adds more dimensionality to the sets, which are a crucial component here as Polanski and DP Gilbert Taylor employ increasingly shorter lenses to broaden the depth-of-field (and, in close shots, to distort facial features, etc.) and visually elongate the sets.

The image is true 1.66:1, not 1.78:1, with slight black bars on the left- and right-hand sides of the screen. A British Board of Film Censors seal (with its "X" rating) precedes the film. My one complaint is some overcooked DNR most apparent in the actor's faces; at times they look processed, like they were colorized in a computer program that was then converted back to black & white. (The telecine work was done at Sony by their employees - Sony seems to have some rights to the film - I've had similar issues with some other Sony titles.)

The uncompressed mono audio has been remastered from a 35mm optical print. Optional English subtitles are included, and the disc is Region "A" encoded.

Supplements include a 2003 documentary, A British Horror Film, in 16:9 enhanced standard-def and running 24 minutes. An excellent, to-the-point show (albeit filled with spoilers), it was produced by Blue Underground and features on-camera interviews with Polanski, Gil Taylor, producer Gene Gutowski, and executive producer Tony Tenser. Also included is a 21-minute segment from a French television show, in 4:3 pillar-boxed format, with footage and interviews taken on the set during production. It's quite fascinating - Deneuve is out of character, looking gorgeous, and Polanski is as impossibly young as she is. (Deneuve mentions a third victim not in the final cut; who is she referring to?) Two trailers, American and British, the first a stunner in high-definition, try to have it both ways, selling the film as both a lurid, sexy horror film and as an acclaimed arthouse-type picture. (Whoever wrote the copy went nuts in the alliteration department: "Fact and fantasy are fused in a frantic fury!")

A previously available but unusually good audio commentary featuring Polanski and actress Catherine Deneuve, recorded in English in 1994 for Criterion's laserdisc release is included. Like other Criterion Blu-rays, a timeline feature helps viewers navigate to selected scenes in the feature, and to specific topics in the commentary. Finally, a small booklet features an essay by Bill Horrigan called Eye of the Storm.

If Repulsion's impact on audiences today is less than the revelation it was back in 1965, it's only because it so profoundly influenced an entire genre that its many imitators have made it familiar. Nevertheless it still impresses, a low-budget film bursting with imagination and ambition. A DVD Talk Collector Series title.