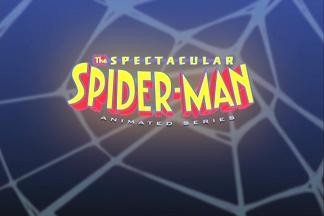 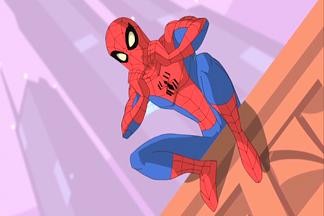 Before I begin this review of the first season of The Spectacular Spider-Man, a cartoon series that has a lot going for it, I just wanted to say a few unkind words about Sony's strategy in marketing this cartoon on home video. For you see, Sony has already released all 13 episodes of this series in four individual DVD volumes within this past year. Todd Douglass Jr. wrote a review of the first release (containing the first 3 episodes edited into a movie called Attack of the Lizard) for DVD Talk. And I provided reviews for Volume Two and Volume Three when this site received copies to look at. These each had three successive episodes of the series. In both reviews, I cautioned consumers to wait for a season set. Volume 4 then came out on April 28, 2009.

Only three months later, Sony now offers the first season in its entirety in one package. So, not only did avid fans buy 4 individual DVDs (with less than two hours of content in each), but Sony adds insult to injury by placing all 13 episodes on only 2 DVDs here - with added featurettes! I'm sure it made business-sense to double dip (and so quickly too), especially considering the Star Wars: Clone Wars animated series is similarly being released piecemeal by competitor Warner Home Video. But, the timing of this first season set still smacks of a disingenuous cash grab.

Well, why dwell on it? Corporate release schedules shouldn't damper responses to the product itself. And The Spectacular Spider-Man is a fun and colorful Saturday morning cartoon approach to the venerable Marvel Comics superhero. As I mentioned before, I've reviewed a couple of the individual releases, so some of what follows is taken from those reviews.

It would be hard to argue that any comic book superhero has enjoyed a more sustained popularity over the last five decades than Spider-Man. The Marvel Comics character, the mainstay of that company's flagship publication The Amazing Spider-Man, has been spun off (no pun intended) into numerous other venues, from cartoon and live action television shows to a rock album, a series of wildly popular theatrical movies, and even a recurring part in the old PBS series The Electric Company.

The Spectacular Spider-Man is a current incarnation of this comics legend that takes its name from a now-defunct spin-off comic book title. It's a half-hour cartoon series, aimed primarily at kids but with some postmodern nods to adults, and basically offers an early 21st century update of the original Spider-Man comic books. Here, Peter Parker (voiced by Josh Keaton) attends high school with Harry Osborn and Gwen Stacey. Bully Flash Thompson is also around, and Parker's future wife Mary Jane Watson transfers to his school midway in the series. Parker lives at home with his Aunt May, and moonlights as the crimefighting Spider-Man whenever he can. As he battles colorful super-villains, he's taking snapshots of himself for the newspaper Daily Bugle. Several of the classic characters from that fictional periodical are here, including Betty Brant and the obnoxious J. Jonah Jameson (voiced hilariously by Daran Norris).

The series is light and fun, with a nice sense of humor. As such, it captures the essence of Spider-Man fairly well. Each episode is relatively self-contained, although certain plot points connect the episodes into a larger whole. The animation strikes me as bright and colorful - and certainly competent for a weekly television program. The characters are presented with some awkward angularity at times (with Aunt May looking thoroughly horrendous), but at least it's consistent and uniform in presentation. As an old comics fan, I enjoyed this updating of the Spider-Man mythos, and I certainly imagine that it will entertain its core audience: adolescents.

Disc one contains the first nine episodes of The Spectacular Spider-Man: Survival of the Fittest, Interactions, Natural Selection, Market Forces, Competition, The Invisible Hand, Catalysts, Reaction, and The Uncertainty Principle. This last episode is a particular favorite of mine, combining the Halloween season with the Green Goblin was an idea that worked very well here. Disc two, then, rounds out the season with the final four episodes: Persona, Group Therapy, Intervention, and Nature Vs. Nurture.

As with other cartoon series, like Storm Hawks, of course, The Spectacular Spider-Man works best in smaller doses. Continual viewing of episodes back-to-back gets repetitive, especially for an adult audience. Keep in mind that this is a weekly Saturday morning program, and should be viewed in a manner similar to the old serials from the 1930s and 1940s. As I mentioned before, there are a few new featurettes to this season set, which I'll delve into more below, although they're predictably underwhelming. Still, I'll go with a Highly Recommended rating, particularly for households with comics fans young and old, on the strength of the series itself. 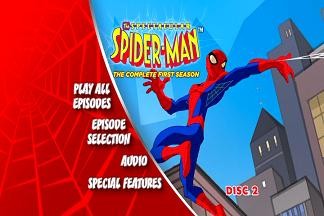 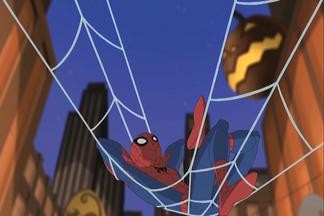 Sony gives these episodes of The Spectacular Spider-Man an anamorphic widescreen presentation in a 1.78:1 aspect ratio that likely represents its original television broadcast. Overall, the programs look great: colors are bright and details are strong. There are some artifacts present with lines during quick action sequences, but it's only a minor fault.

No subtitle options are made available.

Absurdly, the individual DVD releases of the same episodes housed in this first season set are advertised prior to the main menu on disc one. Talk about dumb. This ad is also available in a Previews link in the menu system, as are trailers for Cloudy With a Chance of Meatballs, Planet 51, Open Season 2, The Water Horse: Legend of the Deep, Monster House, and Next Avengers: Heroes of Tomorrow.

Disc two has no trailers, but a Special Features menu option provides access to two new advertised featurettes: Spider-Man: Reanimated (14:06) and Stylizing Spidey (8:19). Both featurettes aren't bad. Fairly typical for bonuses on a DVD, these are rapidly-edited pieces with soundbyte comments from the writers, behind-the-scenes people, and vocal talent punctuated with snippets from the series itself. Both are presented in anamorphic widescreen.

Keeping Sony's "cash grab" approach to releasing this series aside, The Spectacular Spider-Man is a lively and colorful Saturday morning cartoon that nicely captures the stories of a variety of villains and supporting characters from the long-running Marvel comic book series. Highly recommended.