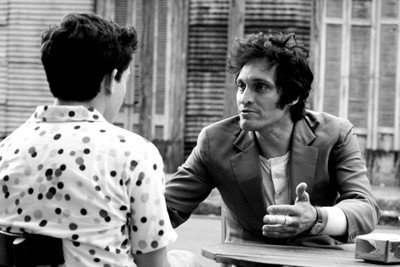 Tetro means to be many things. It's intended as a multi-layered family drama where the sins of the older generation are visited on the younger, parallel lives that are all the more tragic for their inescapable foibles. As dramatic as an opera, as rich as a South American novel, it runs along two timelines. One, the present, is in widescreen and black-and-white and is cut hard like 1950s Nicholas Ray, but with the starstruck eyes of 1960s Fellini; the second is smaller, in color, the sudsy antics of Douglas Sirk but with the underlying fantasy of Powell and Pressburger. At least, that's what is intended.

Tetro is also intended to be the redemption of Francis Ford Coppola, his return to simpler, more personal filmmaking, and the first original script he's written since his paranoid 1974 masterpiece The Conversation. In the way that film was all internal, suffocated by its cramped locations and Gene Hackman's cramped thoughts, Tetro is external, large, open. It's Rumble Fish, but set in Argentina and trading motorcycles and gang fights for symphonies and the dramatic theatre. It's as crazy and ambitious as One from the Heart, but without the audacity or the music. It does, however, have that film's flaws, which is likely something Coppola didn't intend. Tetro might as well have been called Opposite Day, because it's all backwards.

The story is this: on a dark and windy night, Bennie (relative newcomer Alden Ehrenreich) shows up on the doorstep of his older brother Angelo (Vincent Gallo, The Brown Bunny). Angelo disappeared nearly a decade ago, abandoning his stateside life and eventually ending up in Argentina, where he has reinvented himself as Tetro. No one knows that he is a rich kid on the lam, a troubled genius whose father (Klaus Maria Brandauer, Never Say Never Again) is a revered symphony conductor. Not even his common-law wife Miranda (Maribel Verdú, Y tu mama tambien, Pan's Labyrinth) has much clue about his past. This is exactly how Tetro wants it, and Bennie showing up after all this time is not to his liking. Bad memories of his former life have lain dormant up until now, and Bennie's prodding begins to bring them out. We see what happened between Tetro and his mother, as well as what caused the rift with his father. We also are made privy to the rivalry between dear ol' dad and his older brother Alfie (also Brandauer). Alfie was the true musical prodigy of their family, and he was shoved aside by his ungrateful sibling when fame came calling.

We're meant to suspect a similar rivalry between Bennie and Tetro. The younger boy has never forgiven his big brother for running out on him. Bennie worships Tetro and has modeled himself after him, even deciding to be a writer himself. When he gets a hold of the manuscript Tetro was writing prior to a mental breakdown (he met Miranda in the sanitarium where she was a doctor), Bennie begins transcribing the scribbled notes--written backwards and in military code--and shaping the story of their lives into a play that will be Tetro's comeback. It's this middle third of the film that works best, as the story starts to open up, Bennie unlocking the mystery to what has happened to his brother. Though Tetro doesn't communicate with him directly, a dialogue does begin, one that reaches across physical and temporal boundaries. Miranda also begins to tell the story of how they got together.

The rest of Tetro arrives stillborn, however; the flashes of greatness that Coppola stumbles upon are surrounded by lifeless, unformed scenes that go nowhere. The director regularly resorts to an aw-shucks, antiquated aesthetic that makes Tetro come off as contrived rather than heartfelt. Though this gorgeous movie is full of remarkable, startling compositions and inventive visual set-ups put together by Coppola and cinematographer Mihai Malaimare Jr. (who also lensed the director's last effort, Youth Without Youth), these do nothing to bail out the by-the-number, undercooked plotting. Coppola the writer wants to bring all of his various influences together--he quotes liberally from Tales of Hoffman and plays around with the Faust legend--but his mastery of the page is not equal to his considerable mastery of the image. 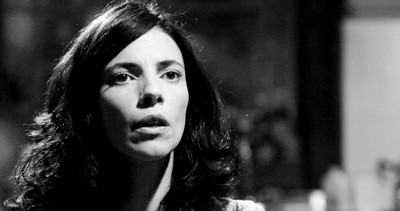 I am also starting to wonder if he has a handle on actors any longer. Alden Ehrenreich and Vincent Gallo are both underwhelming in their performances, and their scenes together look more like clumsy rehearsals for a student film than something we should be seeing in a Coppola picture. The greatest resemblance they share as fictional siblings shouldn't be the deadness in their eyes. To make matters worse, all of the Spanish-speaking cast, which includes Carmen Maura (Volver) and Rodrigo De la Serna (The Motorcycle Diaries), act circles around them. I know Gallo has a bad boy image that Coppola wants to exploit (leather jacket and all!), but he's terrible, and he's no match for Maribel Verdú. The actress is a joy to behold in every scene. She is sparkling and alive; Gallo is stiff and sleepy. His character is also a total prick, and if she didn't so freely acknowledge it and if her attraction wasn't more a motherly desire to heal than a true romance, it would be impossible to believe that Miranda would spend any time with Tetro at all. (Gallo's worst performance in this movie is actually his dubbing job over the young actor who plays him in flashback; it's so chintzy and off the mark, it's like watching a bad Italian film. Again, what was the director thinking?)

Coppola also fails to convince us of Tetro's genius, which is always the difficulty of a film such as this. It's easy to say he's a genius, but the illusion becomes hard to maintain when we actually see his work. The brief snippets we do see of the play Bennie pulls out of Tetro's scribblings are so abstracted, they seem like a cop-out--so much so, Coppola pans away from them and shows the same action redone as a colorful ballet and featuring different actors. There is no reality to show, he only has the fantasy, and if even Tetro's creator can't believe in his character's artistic ability, how can we? Given that this triumph underscores the big family secret that any moviegoer with half a brain figured out long before it's revealed, and the climax of this picture drops with a pretentious thud.

I've hated writing this review. I really have. It's taken me almost twice as long as it normally does. It's because I wanted to like Tetro. I was really pulling for Coppola. I respect the hell out of the guy for his late-in-life switch-up, for going out on his own and doing it digital and making the movies that he wants to make. Nothing would please me more than an invigorated effort that would prove he still has it. Sad to say, Tetro is not the motion picture that's going to do it. It's gorgeous, sure, but the fact that it's labored and hollow supercedes its beauty. Yes, a man's reach should exceed his grasp, but sometimes you've got to pull that hand back and make sure you've at least gotten hold of enough to keep going. For Francis Ford Coppola, that reality check is a couple of films overdue.