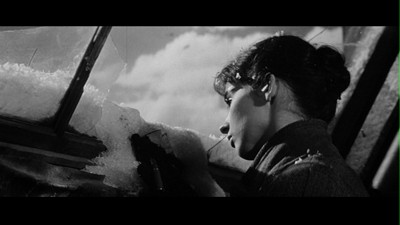 Anne Frank: The Diary of a Young Girl was first published in Europe in 1947, and then in English in the United Kingdom and America in 1952. The true journal of a Jewish girl who spent two years hiding from the Nazis in an attic in Amsterdam alongside her family, a second family, and another man, immediately captured the world's attention for its honest, heartfelt account of a growing young woman and her experiences in World War II. It was made all the more poignant by the fact that the Franks and their friends were eventually discovered, and that though Anne's diary survived the war, Anne did not. She died in the Bergen-Belsen concentration camp in 1945. She was fifteen years old.

In 1955, writers Frances Goodrich and Albert Hackett (It's a Wonderful Life) wrote and staged a play version of the journal, retitled The Diary of Anne Frank, winning a Pulitzer for their efforts. A few years later, Goodrich and Hackett adapted the play for the silver screen. George Stevens, who in addition to directing such classics as A Place in the Sun and Giant had also directed documentaries for the post-War effort, undertook the project, and the Oscar-winning film of The Diary of Anne Frank was released in 1959.

That's a lot of history, but The Diary of Anne Frank is a film about history, so where it comes from is important. Unfortunately, it's also a little dusty, the way dry historical documents often are. Given the enduring power of Frank's actual book, it's not really the fault of the material, but a fault of the translation from page to stage to screen. If I had to put my finger on it, it's down to the fact that the film is too reverential, too afraid to stray from the serious tone the filmmakers think is required. Part of the reason Anne Frank's story has so much resonance is that it features the full range of emotions one would expect from a teenage girl; the emotions are all here, but buried under the weight of noble intentions.

The film opens and closes with a framing sequence where Anne's father, Otto Frank (Joseph Schildkraut), returns to the Amsterdam office building to view the hiding place that kept him alive. It's then that he is given Anne's diary by the people who provided them the room (Douglas Spencer and Dody Heath). These bookends signal that this the longer road-show edition, which runs about three hours. This cut also has the overture, exit music, and an intermission card--making it George Stevens' preferred version and not the shorter cut made to meet more commercial concerns.

The film covers the two years that the families spent in hiding. There are the Van Daan's--mother (Shelley Winters, who won an Academy Award for this role), father (Lou Jacobi), and their son Peter (Richard Beymer)--and the Franks--Otto, mother Edith (Gusti Huber), and their eldest daughter Margot (Diane Baker). And, of course, Anne, played by newcomer Millie Perkins. We learn that Anne is a talkative, energetic girl, known as "Quack-Quack" at school because she's so talkative, at the point of life where she'd really just start experiencing it. The group is joined by an old dentist, Albert Dussell (Ed Wynn), midway through their stay, when things start to go really bad in Holland. We chronicle their ups and downs over the course of their exile, including the excitement of hearing about D-Day on the radio and the disappointment when they are discovered not too long thereafter. 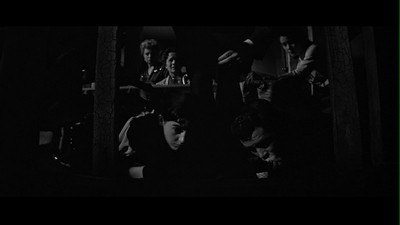 Dramas confined to a single space are a particular challenge, but when done right, they can be a special thing. Alfred Hitchcock's Lifeboat immediately springs to mind. Also set during WWII, it follows the survivors of a U-boat attack after the ocean liner they are sailing on is sunk, and though it takes place on one tiny dinghy, it manages to be romantic, thrilling, and thoroughly engrossing. The Diary of Anne Frank is full of inherent drama, including the irritation and frayed nerves that would naturally arise in such a situation. There is a love triangle between the two sisters and the boy, there are the late-night robberies that inspire fear in the tiny group, and there is, of course, the lingering question of when the Nazis will discover them. Most of the film, however, is flat, treading the material too delicately. The silent waiting when the group doesn't know if they have been found out is real hold-your-breath filmmaking, but all of the emotional material is staid and quiet and not very effective.

The cast is largely quite good, with the supporting players outshining the young Millie Perkins without much effort. Granted, it's hard not to disappear next to showy performers like Winters and Wynn, but the most powerful turn comes from Schildkraut, whose quiet strength as Otto Frank binds everything together. Some have kvetched about Perkins over the years, and though she is a little stiff, I found her convincing as a stifled girl aching to stretch her limbs. Next to Beymer, she's positively manic, though. It's like he's trying to be a broody James Dean-type, but he doesn't have any of the interior pain or desire to pull it off. Given how much time is given to the blossoming romance between the two young stars, and how all the scenes are paced like spilled molasses, there are long stretches of boredom that really drag The Diary of Anne Frank down.

The one element of The Diary of Anne Frank that is wholly impressive is the cinematography. Shot by William C. Mellor (Bad Day at Black Rock, Peyton Place), with second-unit work by Jack Cardiff (The Red Shoes, The African Queen), the movie is beautifully lit and expertly composed. Allegedly, director George Stevens didn't want to shoot the film in the extra-wide Cinemascope format, but it's a decision that ends up paying off. The film still feels cramped, but Stevens gets enough room to show his full cast without stacking them on top of each other. In the few scenes where the movie is allowed to open up, particularly when Anne peers dreamily through the broken skylight at a snowy sky or she and Peter smolder amongst the laundry, the film looks especially marvelous. The tension of the suspenseful scenes also works thanks to their brilliant use of light and shadow.

Even so, the cumulative effect is one of draining the natural drama out of this story, of playing the mood far too dour and leaving little room for the tiny joys the characters find to blossom in full. Though we're always inside the room, we're also always outside the people, and that keeps The Diary of Anne Frank from connecting in all the deep ways that it should. 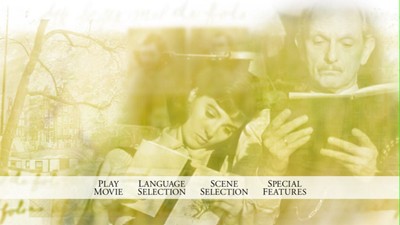 Video:
The image transfer on this disc is a gorgeous 2.35:1 black-and-white picture. The values of the image are fantastic, with deep blacks, bright whites, and all the shades of gray in between. The resolution is crisp and the surface clean. You can't ask for a better restoration job than this.

Sound:
The English soundtrack has been remixed in 4.0 and 5.1 Dolby Surround, the audio is very good, something you can really tell in the tense, quiet moments more than even in the loud sequences with full orchestration. There is no extra hiss, no "sound" of silence, a pin could literally drop and be heard. Good work is also done with sound effects that exist outside the little attic--night-time intruders, passing sirens, distant explosions--to create depth in what is being heard.

A Spanish dub version is also available in mono, and the main feature also has English, French, and Spanish subtitles to choose from.

Extras:
The Diary of Anne Frank: 50th Anniversary Edition is a double-sided disc with the main feature on one side and the extras on the other. The only bonus on side A is the full-length commentary featuring a conversation with George Stevens, Jr., son of the director and second-unit man on the movie, and Millie Perkins, the first-time actress who played Anne. It's an excellent commentary. The two get on well, swapping stories about the movie and giving their impressions of the film after all these years. They discuss the true history behind the cinematic tale and also share memories of the set. Perkins has much to say about being a young performer with no experience, while Stevens, Jr. has a good handle on what made his father's style distinct, while also giving respect to his artistic partners. 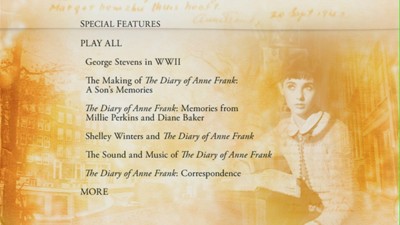 Side B has all the other bonus features, of which there are plenty. The majority of these features were put together by George Stevens, Jr., who oversaw this DVD production. These programs are as follows:

* "George Stevens in WWII" (7 mins, 40 seconds): A look at footage shot by George Stevens on battlefields overseas.
* "The Making of The Diary of Anne Frank: A Son's Memories" (25:04): As it sounds like, a version of the standard behind-the-scenes featurette, but in this case through the point of view of the director's son and his second-unit director. Using a great collection of photos, Stevens, Jr. details how his father got involved in the film, their tour of important historical locations (including meeting Otto Frank), and tales from on the set.
* "Memories from Millie Perkins and Diane Baker" (25:53): New interviews with the two actresses who played the young Frank girls, from casting through production.
* "Shelley Winters and The Diary of Anne Frank" (7:00): Pieces from a 1980s interview with the actress talking about working with George Stevens.
* "The Sound and Music of The Diary of Anne Frank" (7:54): Focusing on the importance of sound effects and the score of Alfred Newman. Newman's son David also participates.
* "The Diary of Anne Frank: Correspondence" (13:13): George Stevens, Jr. reading letters between Otto Frank and George Stevens regarding their thoughts about the film, as well as letters from Stevens to his son when the younger George was overseas shooting the second unit. Stevens also breaks from the letters to give some of his memories relating to the pieces. To close, he reads the preface Stevens wrote for the movie tie-in version of the diary. Historical photos, including pictures of real locations, are played underneath, and credits for all of the extras appear at the end of this featurette.

Outside of these new programs is a promotional short (14 mins., 7 second) from Fox Movie Channel, hosted by Tom Rothman, that looks at the historical nature of the picture. It's a bit fluffy, but overall, still interesting.

Finally, there is an interactive pressbook gallery and a behind-the-scenes photo gallery.

FINAL THOUGHTS:
Rent It. The Diary of Anne Frank: 50th Anniversary Edition is an appropriately reverential historical preservation of a movie that itself attempts to be a historical preservation. The double-sided DVD is packed out with extras, and the transfer of the movie has been lovingly restored for its latest digital presentation; the downside is that the movie is what it is, and this 1959 dramatic retelling of the Anne Frank story is a largely staid production. Beautifully shot and full of moments of real tension, it unfortunately treats the material as if it were overly fragile and might disintegrate on touch. Pretty to look at, inspiring for the tale it tells, but at three slow hours, ultimately tiresome and dull. 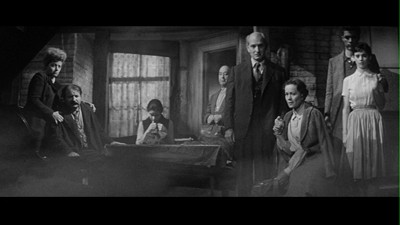