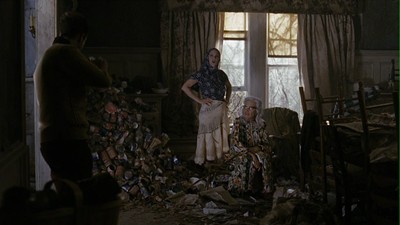 I'll confess, I was skeptical when I heard that there was going to be a dramatic movie adaptation of the 1975 Maysles Brothers' documentary Grey Gardens, a quirky portrait of the eccentric mother and daughter Big Edith and Little Edith Beale, relatives of Jacqueline Kennedy. Found living in utter squalor in the East Hamptons, the pair became a mini media sensation, scandalizing Jackie O, who eventually stepped in to help them out. The Maysles, who were integral participants in revolutionizing the documentary genre with their films Salesman and Gimme Shelter, ended up turning their camera on the Beales after a larger portrait of Jackie O.'s extended family had fallen apart. The featured women became instant celebrties; particularly Little Edie, who came out into the world as a result of the picture.

The documentary Grey Gardens is uncomfortably honest. The eccentric mother and daughter who have so tightly clung to their past dreams that they've let the rest of the world decompose all around them aren't afraid to show who they are, and it's impossible not to grant them their wish and give them the attention they crave. Yet, it's also a little weird, like maybe we aren't laughing with them, that the full extent of the humor is lost on them, making Grey Gardens as much of a freak show as it is a sympathetic account. How, then, would the filmmakers tackling the material treat it over thirty years later? Would they turn the Grey Gardens story into camp, a Kennedy family Whatever Happened to Baby Jane? And did they really cast Drew Barrymore as Little Edie?

Thank goodness the answer is no to the former and yes to the latter. The HBO adaptation of Grey Gardens, co-written and directed by first-timer Michael Sucsy, is both respectful of the documentary and of its subjects. Sucsy has come to illuminate, not to ridicule. Likewise, Drew Barrymore turns in the performance of her career as Edie, avoiding caricature even as she adopts a heavy New England accent and stifling age make-up. She manages to avoid a cheap impression, instead letting the essence of Little Edith Beale take her over. I am sure the actress found some familiar elements she could identify with in her subject. Both have a natural optimism and sprightliness, both know what it's like to be underestimated. Color me guilty on that one, Ms. Barrymore, and please accept my apologies! 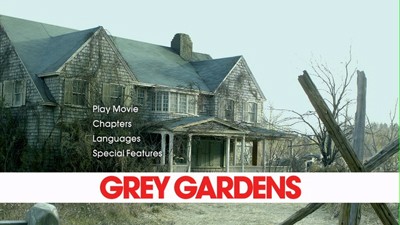 Sucsy's Grey Gardens has the benefit of not being beholden to what was happening in the here and now the way the documentary was, and so this remake is able to cover two timeframes. The movie establishes its back-and-forth manner rather quickly. After a brief opening where we see Little Edith and her mother (Jessica Lange) screening the Maysles picture, we get to see Edie's social debut in 1936 followed by a scene in 1973, the day the Maysles (Arye Gross as Albert, Justin Louis as David) asked the duo to let them make what would become Grey Gardens. The 2009 movie regularly cuts back and forth between the two timelines, tracing the ups and downs of Big Edie's marriage, Little Edie's failed escape to New York, and the manipulations the mother engages in to keep her daughter close. By being able to go back in time like this, we can see how life changed for the Beale women, how they went from hopeful dreamers (both fancied themselves singers who could be famous Broadway stars) to oddball shut-ins. There is a fascinating psychology at play--the controlling matriarch, the nervous daughter (she has a condition that makes her hair fall out, and I suppose there is almost a kind of Stockholm Syndrome at work that keeps her from leaving Grey Gardens), and the way such self-delusion causes the deluded to become entrenched in a way of life, no matter how sad.

And it is sad. There is never a point in this dramatization where you get the sense anyone is laughing at the Beales. On the contrary, the filmmakers are rather charmed by them, just as the Maysles were. Like I said, one has to keep watching, and the film emphasizes that even if the ladies didn't fully know how off-the-beaten path they had strayed, they also don't likely care. Little Edie, in particular, got her wish. She was freed from her prison and she became a star. The coda for Big Edie is a more bittersweet, but here again, Sucsy and co-writer Patricia Rozema (who also wrote and directed Mansfield Park and recently helmed Kit Kittredge: An American Girl) are kind and give the older woman a chance to grow. Big Edith lets Little Edith go at last, accepts her role in the background and lets her daughter have the spotlight. Jessica Lange, unsurprisingly, is terrific. She doesn't overdo either the craving for attention or the eccentricities that Big Edith displays in either timeline. Both she and Barrymore go through the aging process together, convincingly creating full characters. You can see the younger versions predicting the older, and the presence of those youthful spirits within the age-racked bodies.

The look of Grey Gardens itself is also worth noting, as the house and the grounds surrounding it age and fall apart alongside the land's inhabitants. The production team takes great care in all the details, meticulously recreating the dilapidated estate seen in the Maysles documentary, complete with raccoons, stray cats, and tin cans. The entire production shows a similar level of craft, with the period clothes looking just right.

All that accepted, I will say, for as much as this Grey Gardens sparkles, it still seems dull when put against the original. Perhaps if you've never seen the documentary (and that is something you should remedy), you will view this dramatic remake differently, but despite the fine performances and the broader insight provided by the larger timeline, the 2009 Grey Gardens has an Achilles heel in that there is the 1975 Grey Gardens. The Beale women were one of a kind, impossible to fully recreate, and so Sucsy's movies will always be in the shadow of the other. (Sort of like how Scorsese's Cape Fear will always pale next to J. Lee Thompson's, or most literary adaptations, no matter how fine, aren't as good as the books; there but for the grace of....) I guess this is the cinematic Little Edie to the Maysles' Big Edie, though in this case the offspring will have to make do with never quite surpassing its parent. You should still see this movie, I know I'm glad to have it in my collection, but you should really see both, it's the only way to get closer to the full story. 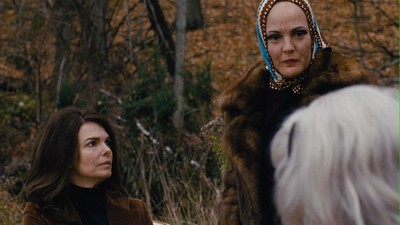 Video:
Grey Gardens was shot at 1.78:1 aspect ratio. Though made for cable TV, it looks as good as any theatrical feature, and the wondrous colors of the brighter, earlier years and the nuance of the darker, later years as captured by the luminous cinematography of Mike Eley (Touching the Void) are on full display. The overall look of the transfer is crisp and clean, with my only nitpick being I did notice some occasional background shimmer. It's faint enough, however, that it could pass without notice if you aren't looking for it.

Sound:
The English soundtrack is mixed in 5.1, and for the most part, I found it to be good. It's warm and vibrant, without any distortion of the music or other elements when the volume goes up. I did have a problem hearing sometimes when the volume was low, though, most notably in scenes that featured telephone conversations or eavesdropping, the muffled voices were maybe too muffled.

A Spanish audio version is also available as a 2.0 track, and subtitles are available in French, English, and Spanish. 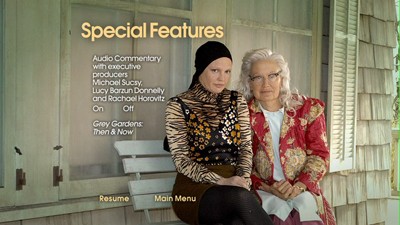 Extras:
Producer/writer/director Michael Sucsy and producers Lucy Barzun Donnelly and Rachael Horovitz have recorded an enthusiastic audio commentary for Grey Gardens. They discuss all aspects of the production, from how they dealt with the history (vintage clothes, taking dialogue out of young Edie's letters, etc.) to technical aspects of the shots (like snow being added digitally). It's very good, and especially informative for such a recent production.

Going along with this is the lone featurette, "Grey Gardens: Then & Now" (11 minutes, 20 seconds). Interspliced with interviews with Barrymore, Lange, Barzun Donnelly, Sucsy, Albert Maysles, Justin Louis, and Arye Gross, as well as members of the production staff, we see footage from the original documentary juxtaposed with pieces of the recreations. It actually should give you a greater appreciation of the lengths the performers and the art team went to in order to get everything just right. Additionally, Sucsy talks about what intrigued him about the story and how he went about finding out what else was there, and the final stages of casting, etc.

FINAL THOUGHTS:
Highly Recommended. Though I still prefer the 1975 documentary version, this dramatic remake of Grey Gardens is a fine piece of filmmaking in and of itself. Lead by exceptional performances from its lead actresses, Drew Barrymore and Jessica Lange, the film details the lives of Big Edith and Little Edith Beale, relatives of Jackie O, who go from social stars of the 1930s to eccentric recluses in the 1960s and '70s. Though the original picture by the Maysles Bros. only showed them as they ended up, Michael Sucsy's adaptation is able to go back in time and follow the slippery slope all the way down, to see how the disappointments these women experienced led to their later seclusion and squalor. Beautiful to look at and sympathetically executed, this 2009 production of Grey Gardens should silence all skepticism. I know it silenced mine! 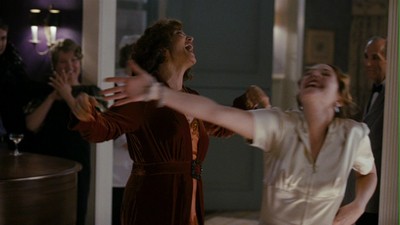