Universal // PG-13 // July 28, 2009
List Price: $34.98 [Buy now and save at Amazon]
Review by Tyler Foster | posted August 1, 2009 | E-mail the Author
Note: The majority of this review is taken from my theatrical review of Fast & Furious, although it has been revised to reflect my opinion of the film having viewed it a second time. 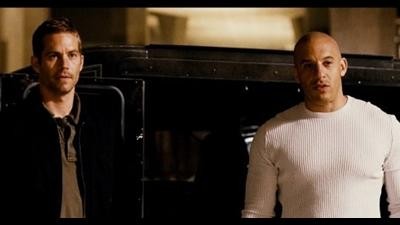 Every review I write starts with a blank screen. I sit in front of the great white void and wonder if I can string together another five paragraphs of insights about whatever it is I've just watched. Sequels are worse; regardless of whether the movie offers any new ideas, I can't repeat the same old insights. We're now on the fourth Fast and the Furious film, and filling the page is a little challenging. There are moments in Fast & Furious that I really enjoyed, particularly from returning star Vin Diesel. I've always thought the actor got a bad rap, and I'm glad to see him back on the right track. The rest, however, involving Paul Walker and Jordana Brewster, thuds to the ground like an engine block dropping onto a thug's head.

Fresh off a string of dangerous gasoline tanker robberies in the Dominican Republic with his girlfriend Letty (Michelle Rodriguez), Dominic Toretto (Vin Diesel) returns to the United States to enact some vengeance on the people responsible for the death of an old friend. Upon arriving in the US, he finds himself again in the company of now-FBI Agent Brian O'Connor (Paul Walker), who's hot on the trail a drug runner that turns out to be the same as Dominic's target. As each of them rushes to deliver their own brand of justice without going home in handcuffs, they find themselves forming a wary partnership once again. 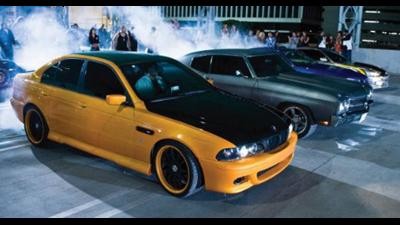 Director Justin Lin was also responsible for the third film in the series, Tokyo Drift, which I saw in theaters and quickly forgot, but came around on in the course of reviewing the new DVDs Universal released to promote Fast & Furious. The appeal of that entry was all in the setting, and unfortunately, windy Mexican desert and downtown Los Angeles just aren't as interesting as the bustling metropolis of Tokyo. Lin's direction here seems strangely stunted, and I wonder if Universal placed a cap on the movie's runtime. I know Fast & Furious has its mind on other things than, boring old talking, but each dialogue-driven scene moves along just a little too quickly, as if as many seconds of dead air as possible hit the cutting room floor in order to make room for a few more spectacular car chases.

And yet, the chases aren't even that spectacular, although the emphasis on physical destruction as opposed to computer-enhanced stunts is nice. No, the appeal of the movie hinges entirely on whether or not you've been waiting for Diesel and Walker to return to the franchise that made them famous, and Diesel delivers, giving a few scenes (like the one where he describes his dream girl) an extra bit of low-key charisma that put a smile on my face. He's got the action-star thing down pat, always going for a quiet anger or a laid-back attitude instead of big, over-the-top machismo. Walker, on the other hand, is a disappointment. His performance does make him seem more mature than most of his earlier work (he's almost completely free of the Keanu-surfer vibe), and he's been good enough in things like Into the Blue and Running Scared, but here he's inescapably tuned out. I wouldn't quite say he's phoning it in -- I'm sure he showed up ready and willing to make a good popcorn movie -- but his heart just isn't in it, and the movie sags. 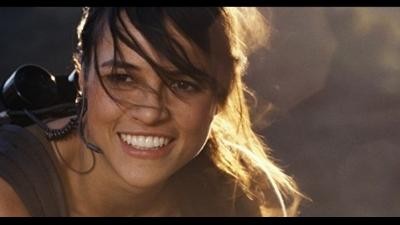 Return performances by Jordana Brewster and Michelle Rodriguez also feel like they're missing something extra. The relationship between Brian and Mia fizzles, and Rodriguez doesn't get enough screen time. It's especially disappointing because Rodriguez seems looser and more relaxed here than I've ever seen her, and it's incredibly appealing but sorely underutilized.

They say you can't judge a book by it's cover, but Fast & Furious boldly and proudly advertises everything it contains: fast cars, thin plot, and the reteaming of the franchise's two biggest draws. The strain on the franchise is beginning to show, but fans of the series will be pleased enough, mainly at the sight of Diesel back in the saddle. The film's massive opening weekend box office looks as if they'll probably try to lure some of the crew back for another go-round, and if they do, it'd be nice if it focused on Diesel and Diesel alone. I don't know if the two hours spent watching it would be worth it, but I think I could crank out another five paragraphs about it.

The DVD
Fast & Furious comes in a glossy red slipcover that thankfully continues the look of the three 2-disc Limited Editions they released to promote the movie's theatrical release. Underneath the slip, the actual artwork is identical, and the discs feature a red paint finish, with the silver disc surface creating the lettering. There is a small insert featuring information on how to download a digital copy of the movie, and an ad for an I-Play game on the other side.

The Video
Rich blacks and saturated colors make up this 2.35:1 anamorphic widescreen presentation, which looks vivid and striking, exactly how you'd expect a 2009 film to look on a 2009 DVD. Since lots of the film takes place at night, those blacks are probably the most noticeable thing about the image, and again, they look great.

The AudiO
The English Dolby Digital 5.1 mix for Fast & Furious is loud and vibrant. Obviously, in this day and age, 99% of the DVDs I review have Dolby Digital 5.1 mixes, and most of them are pretty unimpressive (frankly, I wonder why some of them even bother). Finally, here's a track that really has the environments and sound effects to take advantage of the format, and it does so in spades. I'm sure some fans will lament the lack of a DTS track, but the Dolby track more than gets the job done. 5.1 French and Spanish tracks are also on board, along with English captions for the deaf and hard of hearing, and French and Spanish subtitles.

The Extras
Director Justin Lin's audio commentary on The Fast and the Furious: Tokyo Drift was the best of the three tracks for the earlier films in the franchise, but for some reason, the track he's recorded for Fast & Furious isn't very interesting. He speaks through almost the entire movie without any real gaps, and he reveals lots of information about the production, but for myself, the only three parts I found particularly interesting during the entire track were an amusing story discouraging any actors from fudging the truth about their qualifications to get a job (which includes a couple of f-bombs), a note that there aren't any deleted scenes from the picture, and the offhanded mention that Paul Walker was just allowed to take a car of his choice home after filming wrapped.

The only other feature on Disc 1 is a gag reel (5:01), which is a fairly dull experience. Trailers for for the horrendous-looking Bring it On: Fight to the Finish, Fighting, Universal Blu-Ray, TobaccoFreeCA.com, "Battlestar Galactica": The Complete Series and Coraline play when you put in the first disc, but you can skip them with the Menu button.

Disc 2 kicks off with the short film "Los Bandoleros" (20:24), directed by none other than star Vin Diesel. It's actually pretty good, covering a tiny fraction of what Dominic has been up to between the end of The Fast and the Furious and his introduction in this movie, although it doesn't have much of an ending. Viewers may be surprised that it focuses on the Dominican Republic culture Toretto's character is hiding out in rather than action or car chases, but I enjoyed it. It also features a little more of Sung Kang's Han, which is a plus.

Next, eight featurettes make up the bulk of the bonus features. "Under the Hood: Muscle Cars" (6:56) and "Under the Hood: Imports" (4:59) not surprisingly cover the numerous vehicles in the movie. Maybe it's just becasue several months have passed since I reviewed the first three Fast and the Furious films, but these seemed more interesting than those movies' respective car featurettes, probably because Vin Diesel and Paul Walker seem genuinely enthusiastic about the various rides. "Getting the Gang Back Together" (9:50) is your basic making-of featurette. It actually isn't too heavy on the film clips (lots of B-roll instead), and features more of an animated, enthusiastic Vin Diesel, although Paul Walker's totally emotionless "Why not?" in reference to making the fourth movie is unintentionally funny. Diesel pops up again in "Driving School With Vin Diesel" (3:51), which has some amusing, shaky footage of Diesel learning to do a few car tricks. "Shooting the Big Heist" (9:47) documents the gas tanker scene from the beginning of the film. It's mildly entertaining, showing how Michelle Rodriguez did several stunts herself, stunt drivers doing top-speed turn-arounds, people actually driving the detached tanks and the filming of the final, massive explosion. "Races and Chases" (11:02) and "High Octane Action: The Stunts" tackle all of the other action in the movie. The first one is kinda boring, not to mention it tries to make out the races in a Fast and the Furious film to be some sort of grand thematic undertaking. Justin Lin also boasts that they did all the car stunts for real, but the final sequence takes place in an entirely CG environment, which, when I saw the movie the first time, made me think the entire sequence was computer generated. The second is a little better, with more B-roll footage of cars turning over and interviews with the talented stunt drivers, but it's nothing revolutionary. "South of the Border: Filming in Mexico" (2:56) concludes by discussing, shockingly, the filming in Mexico. I'm not sure this deserved its own featurette, but it's funny to see how excited the locals are to see Vin, who converses with them in Spanish and signs autographs.

The bonuses round out with an amusing first-person music video for "Blanco" by Pitbull feat. Pharrell (4:11), which illustrates in no uncertain terms how much Pitbull likes hot women in bikinis, and trailers for all four Fast and the Furious movies (1:48, 1:30, 2:13 and 2:14), which is great because until recently Universal had stopped including trailers on their DVDs. I also found an easter egg (2:59) on the second page of Extras on Disc 2, which is an amusingly somber "in memoriam" tribute to the various film cameras that gave their lives to film the stunts of Fast & Furious. As previously mentioned, you can also put the second disc in your computer to download a digital copy for PC or Mac. All of the features on Disc 2 include optional English, French and Spanish subtitles.

Conclusion
What can I say? Regardless of what anyone thinks about the The Fast and the Furious franchise, there's a legitimate place in the film world for mindless B-action movies like this, and for B-movie action stars like Vin Diesel. This fourth Fast film isn't going to change anyone's mind about Diesel or the quadrilogy, but as someone who enjoys watching him kick the occasional ass, and coupled with the solid bonus features (especially Diesel's short "Los Bandoleros"), I'm willing to recommend the overall DVD package to pre-existing fans.