The Criterion Collection // Unrated // August 18, 2009
List Price: $39.98 [Buy now and save at Amazon]
Review by Stuart Galbraith IV | posted August 6, 2009 | E-mail the Author
Few films are as ideally suited to the Blu-ray format and big screen TVs as Play Time (1967), Jacques Tati's brilliant, epic satire about a Paris overrun with austere modernist architecture and bewildering technology. Filmed in 65mm (using Mitchell cameras) and released in 70mm with aggressively directional stereophonic sound, like Lawrence fo Arabia and 2001: A Space Odyssey it demands to be seen on a big screen under optimal conditions. Tati's work is often likened to those of silent clowns such as Buster Keaton; while Tati's concerns aren't dissimilar, his approach is completely different - Play Time is nothing if not totally original, an experimental work like no other before or since.

Though I had seen it twice before on VHS, it wasn't until I saw Criterion's 16:9 enhanced DVD of Play Time on my then 55-inch rear-projection widescreen TV that I finally "got it." Where before I appreciated its innovativeness without really enjoying it as much as Tati's earlier films, that third time - a late-night viewing with four or five friends - was a revelation.

That's because the nearly plotless Play Time (no, not "Playtime") is the film comedy equivalent of looking at a bustling ant farm with busy activity happening in several places simultaneously. On a big movie screen (or big screen TV) and especially in high-definition, one can actually see and study (let alone appreciate) Tati's long, uninterrupted takes where funny things are going on in several parts of the frame at once.

Criterion's Blu-ray is a major upgrade from their original 2001 DVD release and its 2006 reissue, though all the extra features are repeats from this later edition. The image is very sharp but perhaps could look better still. At 124 1/2 minutes some may complain that it's shorter than Tati's 155-minute premiere version; nevertheless, Tati himself supervised and approved the 124 1/2-minute cut presented here - it's now the "official" version of the film in the same way Kubrick's premiere version of 2001: A Space Odyssey was altered and discarded by the director in favor of that film's 141-minute cut. 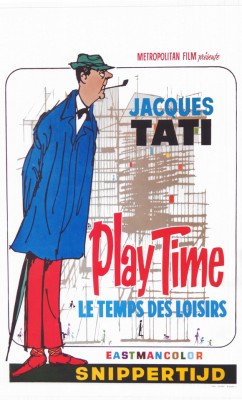 Though mainly an ensemble piece with about 30 characters, the movements of two stand out: Barbara (Barbara Dennek), a pretty, wide-eyed American tourist traveling with a group of middle-aged women; and Monsieur Hulot (Jacques Tati), the beloved, slightly bumbling everyman from Mr. Hulot's Holiday (1953) and Mon Oncle (1958). The film is more or less divided into six acts, with the characters frequently intersecting at Orly Airport, in a coldly impersonal, ultra-modern office building, at a trade exhibition of the latest home and office gadgets. Another sequence has M. Hulot reluctantly visiting an old friend's similarly ultra-modern apartment; there's a long sequence (almost the entire second-half of the picture) at an exclusive restaurant/nightclub during its disastrous opening night, one of refined chaos, and as dawn breaks following the throngs of tourists as they board their respective buses and head back to the airport, eventually joining a huge "Carousel of Cars."

The Paris of Play Time is a utilitarian world of stainless steel and immaculately polished linoleum walkways, of coldly-efficient (yet, ultimately, inefficient) office cubicles, high-tech elevators, and a funhouse-like maze of glass passageways. The extravagantly over-romanticized Paris imagined by tourists is completely absent, except for flashes of the Eiffel Tower and the Arc de Triomphe, fleetingly glimpsed in the reflections of Plexiglas doorways. (Actually, both are seen in the distance in one long shot earlier in the film.) Later on, a travel poster inviting Parisians to "Fly to London" is so dominated by a Girders & Panels-style modern office building it almost blots out Big Ben and dwarfs a double-decker bus and a London bobby. In the very next shot, an identical scene (same building, this time with French bus and gendarme) is revealed just outside, and later similar travel posters with similar buildings advertising vacations to other cities around the world turn up.

Another of Tati's innovations was to give the color film a black and white look - more accurately one drained of color beyond varied shades of silver and gray building materials, with only occasional splashes of other hues, such as the lovely green dress Barbara wears to dinner during the film's second-half.

It's quite hilarious from beginning to end, yet almost impossible to describe why it's so funny. Some of the humor harkens back to the silent era: an elderly, arthritic guard skittish about using the building's daunting electronic security system, a labyrinthine control panel of blinking lights and beeping noises; a warmed-over sole entrée (sogliole gratinate, perhaps?) seasoned into oblivion by a chorus line of inattentive waiters. But some of the best bits are better experienced than described: a dispirited janitor vainly looking for something to clean along a spotless, super-polished walkway; an ancient Greek column that turns out to be a trash can; a rental car agent scurrying about like an insect.

Though its man-made environment sounds awfully oppresive it's really not in the end, nor is it overly critical of philistine American tourists, though Tati clearly enjoys poking fun at them. The tourists don't seem at all disappointed by all the steel and glass ("Oh! They have such teeny cars," exclaims one. "Wait till you see how modern it is!" says another. "And they even have American stuff!"). And yet Barbara, among others, who on the spur of the moment entertains tourists and Parisians alike with a lovely impromptu piano concert balances their empty-headedness, and by dawn the pretentious nightclub gives way to a raucous, old-fashioned cafe overflowing with warmth and good humor.

And if Tati is mourning the death of an Older World France he also seems to be suggesting that humanity will still win out in the end. No matter that the chichi restaurant is all but collapsing around them, the tourists and native Parisians enjoy themselves enormously anyway, M. Hulot included, and his sweet gesture of buying Barbara a parting souvenir - a tacky scarf bedecked with Parisian iconography - suggests that, in the end, a kind of universal harmony will prevail. 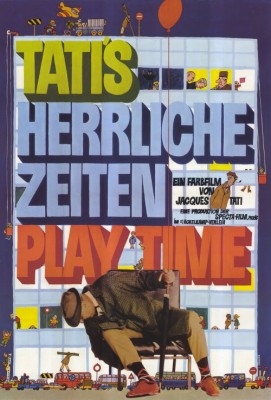 Play Time was filmed with 65mm Mitchell cameras and released in 70mm, and normally such presentations have original theatrical ratios of about 2:1. Tati seems to have opted for a different OTR, but I've yet to hear a definitive explanation why. On the Blu-ray disc the opening titles are pillarboxed to about 1.66:1 but the rest of the film is 1.78:1, at least on my monitor, though Criterion says it's 1.85:1 and calls that the OAR (though that doesn't account for the 1.66:1 titles). For the transfer a 35mm reduction inter-negative was sourced, made from a 65mm inter-positive. The opening reel has a lot of fine negative scratches but gets significantly better as it goes along. Around the 45:00 mark the picture pops into added clarity, at least to this reviewer's eyes.

The improved high-def image adds weight and texture to all the glass and steel and faux marble and modern, black leather chairs (that amusingly pop back into their original shape after each use). For the first time I could also clearly see one aspect of the production I had only previously heard about: Tati's use of cardboard cut-outs to fill out his crowd scenes. Several are clearly visible aboard some of the buses.

Just as importantly, Criterion sourced the original stereo stems to recreate the amazing separations and innovative use of music and sound effects; easy to overlook, Play Time has one of the best (and funniest) mixes of any '60s film. The sound effects are quite amusing and, at times, the electronic hums and beeps almost become characters in themselves. An alternate international soundtrack is included, but the original French one already has plenty of international dialogue, including much English, so that one is preferred.

The supplements, all in standard-definition, consists entirely of material repeated from the 2006 reissue DVD :

Video introduction by writer, director, and performer Terry Jones (First-time viewers are strongly advised to watch this after the film, not before)
Selected scene commentary by film historian Philip Kemp
Au-delà de "Playtime," a short documentary featuring behind-the-scenes footage from the production (Though too short, this is the most interesting extra, and includes some amazing footage.)
Tati Story, a short biographical film (It features lots of great clips, but plays like a filmed resume.)
"Jacques Tati in Monsieur Hulot's Work," a 1976 BBC Omnibus program featuring Tati (speaking English! Though more about Mr. Hulot's Holiday, it does feature an extended segment on Play Time.)
Rare audio interview with Tati from the U.S. debut of Play Time at the 1972 San Francisco International Film Festival
Video interview with script supervisor Sylvette Baudrot (This segment reveals much about Tati's on-set personality.)
Cours du soir, a 1967 short film written by and starring Tati
A small, 8-page insert/booklet featuring an essay by film critic Jonathan Rosenbaum.

Though it leaves the viewer wondering about the still-missing footage from the longer premiere version, and whether the image could be further improved if directly transferred from the 65mm negative instead of a print-down element, this Play Time is still a joy to watch, an unqualified masterpiece, and for now this is by far the best way to see it short of a 70mm screening. The supplements, though repeats, are plentiful and help put the film into context with Tati's tragically spotty film career. This is one of the best Blu-ray releases of the year, and a must-own DVD Talk Collector Series Title.