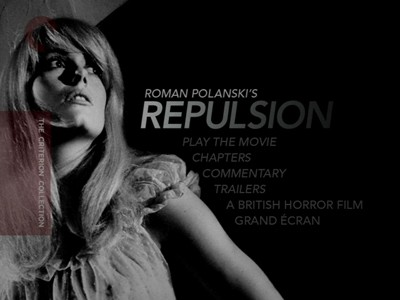 Had everything I'd read about Roman Polanski's 1965 creeper Repulsion not tagged it as a horror film, I am not sure I would have realized it was one. Certainly not in the first twenty minutes or so, when Catherine Deneuve's silent, petulant wandering seemed more like affected malaise than a supernatural dread. Not that there is anything wrong with that, I could watch a pretty blonde girl bite on her fingernails for far longer than is probably natural. It also serves Polanski's greater purpose: he is establishing a tenuous reality that the rest of Repulsion will soon be dismantling.

Deneuve plays Carol, a transplanted French beauty who lives in London with her sister, Helen (Yvonne Furneaux). Carol works in a high-class beauty salon, where she is a manicurist for gaudy rich women who alternately treat her as a servant and as a child, demanding she jump at their command and then listen to their advice about men. It's wasted advice, however, since Carol is already wary of the male species. From what Polanski and director of photography Gilbert Taylor show us with their camera, it's with good reason, too. Adopting Carol's point of view, we see 1960s London as a predatory jungle where sweaty bruisers cruise for chicks. Their unwelcome gaze, their even more unwelcome comments, even their unwelcome toiletries--Helen's boyfriend Michael (Ian Hendry) is leaving his razors and things in their bathroom, crowding Carol's personal items--men are constantly encroaching on Carol's existence. Even Colin (John Fraser), the nice guy who is trying to score a date with Carol, runs with wolves. Cutaways to him and his buddies in the pub might as well be set in the locker room for all the randy talk that goes on.

Signs that something is wrong start out normal enough. Hearing Helen and Michael have sex through the walls keeps Carol up, and that's enough reason not to like anyone. Even Carol's fascination with cracks in the sidewalk is understandable: when you're bored, the smallest things become alluring. Even if we don't understand what it is yet, Carol senses that her world is about to shatter. Helen is planning a trip to Italy with Michael, and Carol does not want her to go. Then she will be truly alone, there will be no one else in the apartment, and whatever is waiting to come in, will.

Here Carol's visions grow more sinister. The walls around her start to crack and crumble. The mirror, portrayed in this film as a private place where a woman can gaze at herself and no one else can look back at her (even in the elevator, Helen checking herself in the mirror seems a legitimate way to turn away from Michael; and, indeed, his bathroom stuff is crowding Carol's own mirror space) is now revealing a shadowy figure lurking in the background, intruders in both physical and reflected space. (Again, Michael's earlier presence foreshadowed this sense of unease in her own home; she never knows when he's going to be there.) As Carol gives up and locks herself in, even things that are really there start to decay, to become symbols of her madness--the over-flown bathtub (why not drain it?), the rotting rabbit carcass (why not throw it away?). As the reality grows more sickened, the visions get more violent. The figure comes out of the shadows and violates her. This lack of security makes any real visitor, even someone she knows, a potential threat and not to be trusted. Carol must fight back. 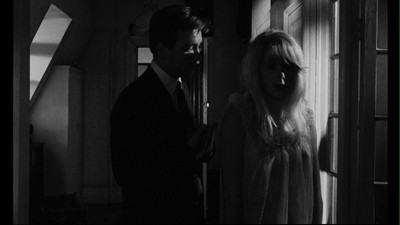 It's easy to flash forward and compare Repulsion to Rosemary's Baby, another Polanski film about a woman who may be going mad and who has visions of a demonic force taking advantage of her sexually. In that later movie, the satanic element is confirmed as real, however, and in Repulsion, we can never be sure if any of this extends beyond Carol's mind. Sure, she wakes up on the floor, undressed and not sure how she got there, after one of the attacks, but she has also blacked out, and there is no other evidence of what happened. Though there are many tell-tale signs that Carol could be cursed--from the rabbit to the gruesome object she carries in her purse--there is no explanation of who might have cursed her or why. I hesitate to even use the word curse when talking about a movie that is portraying feminine problems, as that carries connotations that aren't in the picture. Polanski and co-writer Gerard Brach are more concerned with the outside societal influence that has driven Carol to this state, and they make no suggestion that this is something being perpetrated by her own body.

On top of the lecherous behavior of the men she encounters, Carol seems stuck in a woman's role, trapped by outmoded ideas of what a girl like her should be doing with her life. Working in a salon, with an emphasis on beauty and appearance, demoralizes her. When she first shows signs of "trouble," the use of the word, particularly by her boss (Valerie Taylor), implies pregnancy. Carol should be a happy girl, and if she's mopey, it's because she's gotten up to things she shouldn't have. So, on one side, the men expect it of her, and on the other, the women condemn her for what is expected. 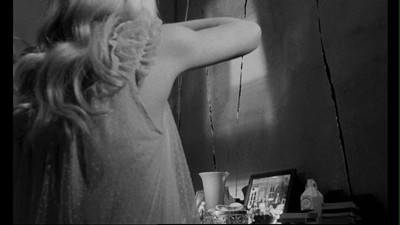 Given Repulsion's portrayal of madness and how it specifically relates to a woman in a changing world, a natural comparison would be "The Yellow Wallpaper" by Charlotte Perkins Gilman. In that short story, published in 1892, a woman is confined to one room because no one around her understands the nature of her mental problems, and the writer tracks the descent into madness that inevitably takes place the more isolated she becomes. There is even a point where things begin to come out of the walls, much like a later scene in Repulsion. This film also reminds me of The Hours, both the book and the movie, and the way it depicts how the expectations in the lives of a trio of women weigh on them. In the one stunning scene of the very flawed movie (and a scene not in Michael Cunningham's book), director Stephen Daldry shows Julianne Moore's psychosis as a rising flood consuming her and the room she sleeps in. This one scene could also sum up Repulsion, and could even be said to echo the bathtub in Polanski's movie. One interesting distinction, though: all of these other women have connections, have people and family they are beholden to, and still feel alone. Carol really is alone, totally disconnected from all others, and she has no idea how to change that. The closest she has is her sister, hence her urgency in trying to keep Helen from leaving.

Horror movies are often just depictions of madness made real, anyway. So many of the best and spookiest ghost stories follow characters that see things no one else can see, and then ending with a big question mark about whether any of it actually happened or not. The scene that Helen and Michael return from Italy to find is typical of that, with nobody besides Carol being privy to what happened (and strangely, Michael maybe turning out to be a kind of hero...?). The technique Polanski employs to capture the bending of Carol's mind is straight out of the carnival funhouse: distorted angles, extreme close-ups, mirror tricks, gooey walls, disembodied limbs belonging to unseen attackers. The black-and-white photography has a sharp, kitchen-sink grittiness, with on-the-street scenes straight out of the Nouvelle Vague; yet, Repulsion is very pretty at the same time, with Polanski lovingly framing Catherine Deneuve in extended shots where the viewer can just sit and stare at how beautiful she is (making us members of the demons lying in wait just out of frame?). It's the visual dichotomy of the movie: the loveliness of the individual vs. the ugliness of the world. As an actress, Deneuve seems to understand this split. She knows how she looks, she also knows how she feels, and she is not afraid to let both the outward and the inward exist simultaneously.

Repulsion is an often delirious, altogether creepy little movie, with a fair share of "gotcha!" scares and plenty of grotesque imagery that insinuates itself into one's brain. "Haunting" is a good word. The residual of its frights lingers. At the same time, it has a psychological depth that goes beyond bumps in the night. In its portrait of one woman at odds with her own mind, it gets underneath the surface of most horror stories and points to where the fear really comes from. It may be called Repulsion, but trust me, you're going to find yourself drawn completely in. 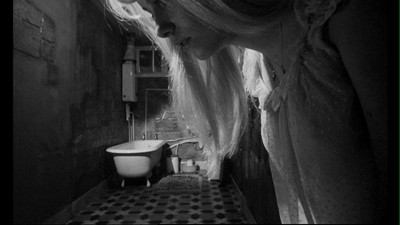 Video:
This is not the first time Repulsion has been on DVD, but it is the first time I have seen it. The image transfer on the Criterion edition is immaculate, however, and I can't fathom there being a superior disc to this. Ported to disc at a 1.66:1 anamorphic ratio, the film is free of any dirt, unintended grain, or imaging problems. The black-and-white looks amazing, with high contrast between the dark and the light. Truly outstanding.

Sound:
The mono mix of the original English soundtrack is nicely done, as well. There is no hiss, nothing off balance, a good contrast between quiet and loud. Closed captioning is also available for the deaf or hearing impaired.

Extras:
The Repulsion - Criterion Collection is a single-disc release in a clear plastic keepcase with a cover printed on both sides. The interior booklet contains new liner notes by film scholar Bill Horrigan, chapter listings, credits, and photos. 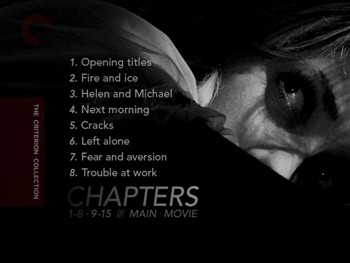 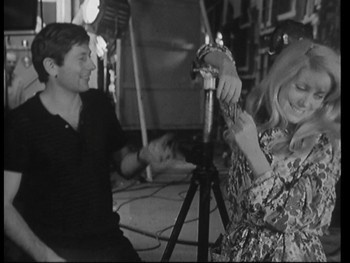 There are a variety of extras on Repulsion, many of which have been carried over from other DVD editions. The first is the audio commentary with Roman Polanski and Catherine Deneuve, which dates back to the original Criterion laser disc for the movie. This is a commentary track for those of us jaded about commentary tracks, a surprisingly compelling look back at the movie. Likewise, a most excellent documentary, A British Horror Film, produced by Blue Underground for their Region 2 disc in 2003, is a fascinating look back at the making of the movie, and it includes interviews with Polanski, Gilbert Taylor, and the producers of Repulsion. It's a solid featurette built on very good interviews.

More vintage is the 21-minute selection from a 1964 French television show put together by Claude Chabrol. This contains a lot of footage of the cast and crew at work, alongside interviews with the director and star.

Finally, there are two trailers, one British and one American, that are great for showing how the film's distributors had to deal with this scary, yet highly intellectual, genre piece.

FINAL THOUGHTS:
Highly Recommended. Repulsion - Criterion Collection is a winner. This disturbing 1965 horror movie from Roman Polanski uses Catherine Deneuve's frosty persona to give us a chilling portrait of a woman who isn't at ease with her own sexualized world. Alone with her madness, she begins to see things that may or may not be there, and through movie magic, we see them, too. It's a slow slide into insanity, and it's thoroughly gripping. For anyone tired of empty-headed modern slasher pics, Repulsion is the movie you've been waiting to discover. 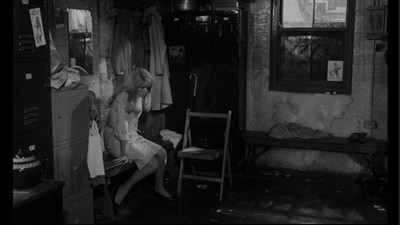