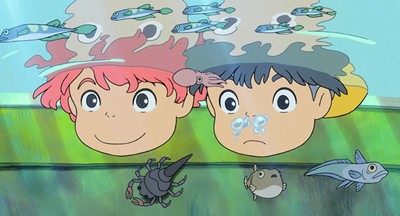 Since a Hayao Miyazaki film only comes along every couple of years, it's always cause for celebration. It's also cause for keeping one's expectations in check. After 2001's masterful Spirited Away, the Japanese animation giant's next full-length effort, 2004's Howl's Moving Castle, was good, but it came out a little wonky. His follow-up, the newly imported Ponyo (also known by the more descriptive Ponyo on the Cliff by the Sea) is a more solid film, better in a lot of ways, but still, I'd suggest tempering one's expectations rather than set little Ponyo up for a big fall.

Made from Miyazaki's own script, this cartoon adventure tells the story of two children: Ponyo (voiced in America by Noah Cyrus), an offspring of the sea, and Sosuke (Frankie Jonas), a human boy born on land. (Yes, that's Miley's little sister and the younger "Bonus Jonas"--beware the Disney Youth!) Ponyo's father is Fujimoto (Liam Neeson), a human who has rejected dry land due to his fellow man's disrespect for the environment, and he now spends his time below the surface performing magic to maintain the proper balance between the water and earth. Ponyo's mom is the ocean herself, a beautiful creature that does as she pleases but understands temperance (voiced by Cate Blanchett, naturally). Sosuke's mom (Tina Fey) works with the elderly while his father (Matt Damon) captains a freighter. They live on a house on a cliff by the sea, where daddy can sail past and signal his loved ones and where Sosuke can play in the water.

It's on one of those trips to the shore that Sosuke finds Ponyo, an odd-looking goldfish whose unauthorized excursion from home has caused her to be trapped in a jar. Sosuke sets the little fish free and then carries it in a plastic bucket wherever he goes, introducing her to the joys of ham and laughing when she spits water in the face of those who are rude to him. It's a happy union of child and pet, and Ponyo even reveals she can talk before Fujimoto comes to claim her and take her home. Smitten by Sosuke and life in the air, Ponyo doesn't stay home for long. Rather, she uses her magic to summon the raging waves to take her back to Sosuke, and she turns herself into a human girl so she can stay with him. This metamorphosis wreaks havoc on the natural order, however, and Fujimoto and Ponyo's mom, Gran Mamare, must test Sosuke's innocent love in order to set their daughter free and restore the status quo. 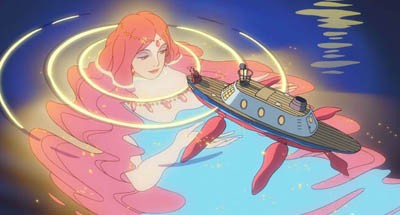 For the first twenty minutes or so of Ponyo, I'll admit, I thought Miyazaki had finally delivered a dud. The set-up is slow, the anti-pollution propaganda too heavy handed, and the drama is a little cloying and a smidge dull. Once Ponyo stages her second jailbreak, though, her movie starts to pick up. The resulting typhoon, featuring Ponyo riding sentient waves like surfboards as her identical tadpole-like sisters and brilliantly designed prehistoric fish jump around her, is a visual delight. So is the arrival of Gran Mamare, which involves a gargantuan wall of water, a collection of stalled sailing vessels, and the moon. Miyazaki and his Studio Ghibli crew never fail to deliver the pretty, and though Ponyo has softer colors and less fully rendered backgrounds than some of their earlier efforts, every frame of this movie is still a wonder to behold. Even Ponyo herself, who at first comes off as a blah character designed to sell toys, turns into a fully fleshed-out being, and the way she bounces around in various stages of her transmogrification is really cute.

The heart of Ponyo is the adventure of the two little children, the way they find each other and then how they set off to find Sosuke's mother after the storm separates them. Sosuke is said to only be five years old, and Ponyo tends to skew toward younger age children much the way Pixar's Finding Nemo did. (Pixar mainman John Lasseter is executive producer on all of Disney's Ghibli imports.) This is fine, as one of Hayao Miyazaki's strengths has always been in the way he animates the youngest among us. The charm of childhood is hard to resist here.

Unfortunately, the little touches that are seemingly added to appeal to the older viewers fall a tad flat. Though the feisty relationship between Sosuke's parents has several amusing comic moments, there is very little to the relationship between Ponyo's parents. Their connection is never really explained, nor do we come to understand exactly how Fujimoto turned into an aquatic wizard. The English dub is also somewhat of a letdown. Though the kids are good, both Liam Neeson and Tina Fey turn in limp vocal performances. They never really become their characters, they just end up sounding like they are trying to keep up with the mouth movements (and often failing).

As if that weren't bad enough, Ponyo peters out again at the climax. The big test that Sosuke must go through is a total letdown. It's a two-question exam, and the first one, when Fujimoto asks if he'll go under the ocean, isn't even relevant, since the whackadoo takes him down below anyway. (With his striped suit and long red hair, I think Fujimoto is supposed to be a kind of Willy Wonka figure, but as an anime fan, he struck me as more like a grown-up Revolutionary Girl Utena after a particularly heinous bender.) Miyazaki sends his kids out on a journey, but they essentially only end up right where they are. It's a whole lot of build-up for a whole lot of nothing.

Still, the good far outweighs the not-as-good in Ponyo. The middle is longer than its drooping bookends, and the quality of the hand-drawn animation can't be matched in either Japan or the U.S. For those who have enjoyed Hayao Miyazaki in the past, seeing how he envisions an undersea kingdom and the creatures that live there will be worth the price of admission alone. Like I said, just adjust your expectations. Ponyo may not be as good as it can get, but it's still good enough.

By some reports, this is Hayao Miyazaki's last film. I hope not, I'd like to think he's got at least one more masterpiece in him, and I'd prefer a more fitting good-bye. If that's not to come, however, we'll always have the ones he's already created, and they maybe say all that needs to be said anyhow. 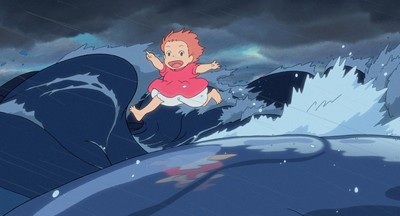