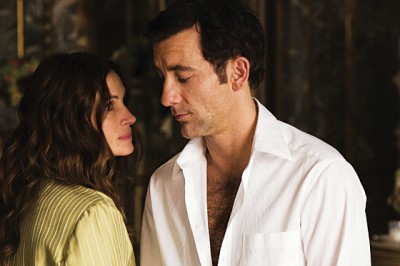 Appreciating "Duplicity" is like admiring an antique pocket watch. It's a gorgeously made production with well-oiled gears and an attractive display, but the mechanics of the filmmaking are the only real significant elements of the movie. The rest of the viewing experience consists of acknowledging cleverness and marveling over forked tongued dialogue exchanges. I definitely enjoyed my time with "Duplicity," bathing in the exceptional craftsmanship, but I was hardly moved by it.

Ditching their government intelligence jobs to build a relationship together, Ray (Clive Owen) and Claire (Julia Roberts) have found themselves involved in an even more devious vocation: corporate spying. With two CEOs (Paul Giamatti and Tom Wilkinson) fighting to claim a special unknown, world-changing medical breakthrough about to hit the market, Ray and Claire are brought in to steer the retrieval efforts, working against each other while fighting to keep the romance alive. Suffering through betrayals and paranoia, the couple scrap to the very last second to take the con for their side. However, in the end, the lines of trust are blurred, leaving the ultimate prize to the most cunning of players.

Following up his acclaimed legal thriller "Michael Clayton," writer/director Tony Gilroy takes a vacation with the deceptively lightweight "Duplicity." Gilroy has learned much in the intervening years, and his new film shows improved confidence with both actors and visual cues, which elevates the movie away from a tedious, hollow espionage routine it feels destined to become within the opening 10 minutes. "Duplicity" is a sophisticated touch football game of flimsy wills, secret documents, and stolen smirks, and it takes some time for Gilroy's identity to settle into the material and invite the viewer along for the ride.

Actually, the "ride" aspect of "Duplicity" never materializes. Gilroy shuns blue steel spy action for verbal gunfire, with chunks of the film devoted to the fine art of banter, often between Ray and Claire. Sorting out their history through flashbacks and flashforwards, the couple argues and flirts, the twist being that neither one of them actually knows the extent of their faithfulness, in the con or with each other. Gilroy moderates the tension wonderfully, in perfect concert with his editor, composer, and cinematographer to hit precise notes of fizzy flirtation and double-fisted deception. The package is attractive and at times legitimately thrilling, especially when the filmmaker cranks up the displays of disloyalty and allows the viewer to pick their own side of the battle.

After clawing at each other's skin in 2004's fire-breathing "Closer," it's pleasing to watch Roberts and Owen play a little more gently this time around. Assuming frosty viewpoints of suspicion, Ray and Claire spend "Duplicity" circling each other, involved in a hostile game of truth or dare they want little to do with, but cannot deny the rush it gives them and their patchy sex life. The oral tango is swatted back and forth securely by the actors, who assume "Thin Man" positions to coolly deliver Gilroy's geometric words with the least amount of sweat. All that's missing here is sex appeal - a critical element to accepting "Duplicity" as more than just a marvelous piece of cinematic architecture. The blame falls on Roberts, who can play aloof with the best of them, but hardly commands the four winds of lust as Claire. It's a shame Monica Bellucci is unable pass off a consistent American accent, because the role needed someone who could believably bring a man to his knees with only the slightest hourglass tremor. Roberts passes the vocab test with flying colors, yet she's far too wiry to keep Owen convincingly thunderstruck. The actors have chemistry, just not the nuclear stuff that would've knocked the film out of the park.

Presented in anamorphic widescreen (2.40:1 aspect ratio), the DVD finds all the proper detail within the frame, though there are some instances of EE that arrive here and there. Colors are strong though manipulated by post-production tinkering, and black levels sustain comfortable restraint. Outdoor city sequences come across the strongest, with the intentionally cool photography wonderfully reproduced on this DVD.

A slick, cutting spy comedy, "Duplicity" holds quite an active 5.1 Dolby Digital track. Lively scoring selection lend the mix a flighty high-end, brassy atmosphere along with some bassy, low-end percussion fun. The all-holy dialogue is protected the entire way, skillfully separated from the soundtrack, making for a direct experience of exposition and tongue-twisting turns. French and Spanish 5.1 tracks are offered.

A feature-length audio commentary with writer/director Tony Gilroy and editor/co-producer John Gilroy is a great tool to understand how "Duplicity" came to be. Edited, rethought, and edited some more, the film was pulled apart several times, and the brothers candidly discuss their successes and realizations along the way. Tony Gilroy leads the conversation and he has much to impart on the struggles of filmmaking, discussing the magic of actors (though his praise is blunted, since he doesn't want to be "that commentary guy"), the various locations, the anxiety of directing, and, most interestingly, a dissection of the intricate opening title sequence. It's a terrific track and well worth a listen, especially for those who came away bewildered by this odd picture.

"Duplicity" is verbose and theatrical, often with the consistency of a large-scale stage play. Gilroy keeps the attention on the actors as they interact and manage the contents of the plot with their reactions to constant double-crosses and revelations of underhanded business. Clearly the globe-trotting, spoiler-heavy plot is going somewhere, leaving it up to the gloved hands of Gilroy to pay off the investment with a conclusion of sheer marvel, making all the homework seem worth the trouble. I'm not certain "Duplicity" ultimately rewards the time invested, but it's a convincing enough spy game stew to slurp slowly. Just appreciate the ride, not the destination.