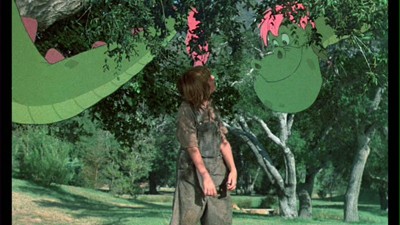 It's funny to think back to how we used to interact with movies in the years before affordable home viewing. Pete's Dragon came out in 1977, several years before I was allowed to go to the movies. Thinking back, I am not sure now that I ever saw the movie at all before. My most vivid memory is not of the Disney film itself, but of the storybook record I had, the kind where you read along in your book as recorded voices act out the tale and tell you when to turn the page, and they have a couple of the songs added on the 45. If I did see it, I guess I would have seen the edited 1980s version, which is nearly half an hour shorter than what is now considered the official version. This new Pete's Dragon: High-Flying Edition uses the 129-minute cut that has been the accepted edit since the movie's home video release. It's very possible that this is the first time, then, that I am seeing a lot of this movie, regardless of whether I'd checked it out before or not.

Pete's Dragon is a conventional movie musical that is made unconventional by its ambitious combination of live-action filmmaking with animated special effects. It is the story of a young orphan named Pete (Sean Marshall) and his friend Elliott, a giant purple-and-green fire-breathing dragon. Considered a product of the boy's overactive imagination by the citizens of the seaside town Passamaquoddy, the audience walks alongside Pete and is privy to the reality of Elliott. When he is visible, he is animated by Don Bluth (Secret of Nimh) and his crew of artists, a full ink-and-paint creature inserted into the otherwise flesh-and-blood, wood-and-stone movie. He's a warmhearted goofball, talking in clicks and burps and some kind of gibberish language, a scaly guardian angel there to protect his charge.

The film opens with Pete on the run from the Gogans, a hillbilly family that bought him from the orphanage. Led by Lena Gogan (Shelley Winters), they only adopted Pete in order to make him work their farm. Once in Passamaquoddy, Pete ends up under the care of Nora (Helen Reddy), daughter of the besotted lighthouse keeper Lampie (Mickey Rooney). Nora is nursing a broken heart, yearning for her sailor fiancé who was lost at sea. Like Pete, she needs a little solace and a little fantasy. Only, she never sees Elliott, nor does anyone else except the drunk Lampie, and so when the mischievous and clumsy dragon tears up the town, poor Pete is to blame.

The plot eventually goes into overdrive once the traveling snake-oil salesman Doc Terminus (Jim Dale) and his lackey Hoagy (Red Buttons) become wise to Elliott being real and the possible uses of his magical hide for slick cures--they team up with the grotty Gogans. The medicine man will take the dragon and the hillbillies will get the boy. Wackiness and songs ensue. 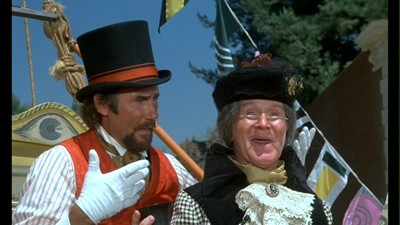 Like I said, Pete's Dragon is a pretty conventional film. There's not much in the plot that isn't tried and true, though in some cases, such as this one, falling back on the proven methods is an easy bet that pays off. Though highly predictable, Pete's Dragon is still entertaining. A lot of this has to do with the quality of the rest of the components. I guess the time not spent on an original script meant they could spend more time working out the other details. The cast is about as good as it can get for a musical comedy, with Red Buttons and Mickey Rooney making a particularly delightful pair of drunks. Jim Dale, a veteran of the British Carry On films and most recently heard as the narrator on TV's Pushing Daisies, is also fantastic as the showy con man Terminus. His braggadocio and verbal stumbling gets quite a few laughs, once again particularly when interacting with Red Buttons. Director Don Chaffey, who otherwise mainly did television and B-movies, keeps the film moving at a brisk pace, including making the smart choice of having a musical number come once every ten minutes or so. The songs by Al Kasha and Joel Hirschhorn are memorable toe-tappers, and they did spawn one schmaltzy classic from the soundtrack, the Oscar-nominated "Candle on the Water." Though, does the love song between boy and dragon, "Boo Bop Bopbop Bop (I Love You, Too)," strike anyone else as weird? I assume the joke is it sounds like they are wooing one another, and that Elliott answers in gobbledygook, but it really hasn't aged well. Oh, for more innocent times....

Let's be honest, though, no one really comes to Pete's Dragon for the tunes. Most folks pop it on because of the dragon! Elliott is the real star, and Bluth's team has fun creating the gentle giant. He's a prankster and a fully realized comedian, and the animators go for broke in terms of having him interact with the real world. Pete climbs on top of him, he walks in step with Hoagy and Lampie, and in one rather cleverly handled scene, Terminus covers him in nets. The filmmakers built a live model of the beast that convincingly tosses the greedy townspeople around the barn where they try to trap him. Once again, for all of our modern computerized trickery, there is no substitute for old-fashioned ingenuity.

So, as a childhood memory revisited, Pete's Dragon stands up pretty well, and I think it could easily create welcome new memories for kids who have never seen it before. It's not the best family movie ever made, nor is it the most sophisticated musical, but it is spot-on as reliable entertainment. It's a movie about the power of imagination, about the common fantasies that we wish could come true--a theme that even makes the clichés forgivable--and as long as they have a little imagination left, it should please regular kids and the grown-up ones alike. 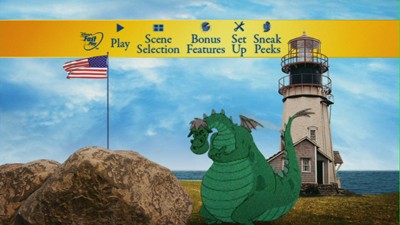 Video:
Pete's Dragon was part of Disney's Gold Collection series back in 2001, an edition that has since gone out of print. Alas, DVD Talk did not review that disc back in the day, nor did I own it, so I can't compare. That bare bones disc had a 1.66:1 anamorphic transfer just like this High-Flying Edition, and while I can't say if the new transfer is any different than the old one, it stands to reason that it is, since everything else on the DVD has gotten an upgrade. Regardless, the image quality is quite strong, with bright colors and surprisingly solid nighttime scenes. In fact, in some ways, this is a movie that suffers from new technology, as some of the special effects don't look as good as they would have thirty years ago. Some of the seams between the animated world and the 3-D world are more obvious in digital; then again, we're also more jaded, and even with the unforgiving nature of new technology, Pete's Dragon still manages to effectively achieve its illusion 85-90% of the time.

One note: IMDB suggests the aspect ratio for this movie is 1.75:1; if this is true, I didn't really notice any problem with the framing as a result of the slightly smaller size. Still, forewarned is forearmed.

Sound:
As noted above, the High-Flying Edition is a full upgrade from the Gold Collection disc of eight years ago. While the 2001 release had only a 2.0 stereo mix, Disney has remixed the soundtrack for Pete's Dragon in 5.1, creating a lively audio track that moves through the speakers and really comes alive during the many musical numbers.

There is English Closed Captioning for the deaf and hearing impaired, as well, should you require it. 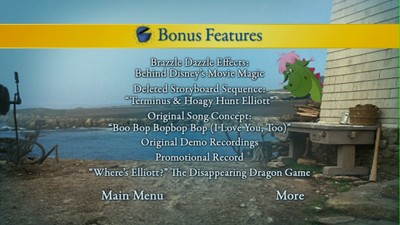 Extras:
Like most Disney discs, Pete's Dragon: High-Flying Edition is equipped with their "Fast Play" function that starts the disc on an ordered program as it loads, bypassing the menu to go straight into the movie and play some of the bonus features, as well. All after they show you the required commercials, of course; these same trailers are also available in the "sneak peeks" section, and include previews for The Princess and the Frog and the Blu-Ray of Snow White. This "parental aid" can by bypassed simply by hitting the menu button on your remote.

The 25-minute documentary "Brazzle Dazzle Effects: Behind Disney's Movie Magic" traces the history of Disney's live action/animation combos, from the earliest days at the studio up until the present, with the CGI work in the Narnia pictures and Enchanted. The grown-up Sean Marshall narrates, and there are interviews with Roy Disney and Virginia Davis, who played Alice in the 1920s Disney short comedies about a girl in a cartoon world. We also see a little of the raw footage from Pete's Dragon.

Two demo pieces show a deleted scene with Terminus and Hoagy and the earliest recording of the song "Boo Bop Bopbop Bop (I Love You, Too)," both audio recordings played with storyboards and concept sketches. We also get audio versions of four re-recorded songs from Pete's Dragon, originally released on a promotional record and geared slightly toward being more commercial, cleaned up so the songs stand alone. Though not listed on the packaging, there are actually three other demo recordings, including two alternate versions and one deleted song. These play with an explanatory title card, and include early versions of "Brazzle Dazzle" and "Every Little Piece." The cut song is called "The Greatest Star of All" and included a villainous rival to Terminus who was dropped from the script.

In addition to the demos not being listed, the rest of these extras are not included on the back cover, either--so, if you're looking at the package in a store, know that there is more on the High-Flying Edition than what is clearly offered. This includes the kid-friendly feature "Where's Elliott? The Disappearing Dragon Game" (interactive play skewing very young), international and U.S. trailers for the film, and a number of galleries: Concept Art, Behind the Scenes, and Publicity.

A two-minute excerpt from the Disney Family Album documentary focuses on concept man Ken Anderson, the artist who created/designed Elliott (which he talks about), and a short bit from a 1956 Walt Disney TV show called "The Plausible Impossible" where Wakt talks about how dragons could have been exaggerated versions of real dinosaurs. This Technicolor clip uses Fantasia to illustrate Walt's point. Finally, we get the Donald Duck animated short "Lighthouse Keeping," presumably chosen because of the lighthouse in the film.

The DVD comes in a regular plastic keepcase with a cardboard outer slipcover.

FINAL THOUGHTS:
Recommended. Pete's Dragon is a solid late-70s musical from Walt Disney. A hackneyed script is rescued by an amazing cast, good songs, and fun animation that combines a cartoon dragon with the life of a real boy. I guess it's the positive of a cliché story that it still manages to be entertaining even if the shine of the new is off of it; some stuff works all the time regardless. This new DVD, dubbed the High-Flying Edition, upgrades the technical specs and also adds a bunch of extras, making for a more impressive package all around. 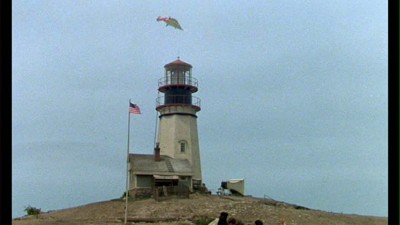