The Criterion Collection // Unrated // September 22, 2009
List Price: $39.98 [Buy now and save at Amazon]
Review by Stuart Galbraith IV | posted September 21, 2009 | E-mail the Author
French New Wave director Jean-Luc Godard's Pierrot le fou ("Pierrot, the Insane One," 1965) is something of a landmark work, being at once a retrospective and a recapitulation (as Cannes Film Festival president Gilles Jacob put it) of characters and themes present in some of the filmmaker's early movies - it's sort of like Breathless in reverse - and made just before Godard's move toward a more "radical cinema" personified by Week End (1968) and his subsequent political films of the late-1960s and early-'70s. With its constant references to old movies (frequently and directly mirroring Godard's own) and pop art, especially comic books, Pierrot le fou is also one of the earliest cinematic examples of postmodernism.

Audiences used to conventional narrative films were enormously impressed and/or left nonplussed. The film was greatly overpraised by many prominent critics yet also loudly booed when it premiered at the Venice Film Festival. Certainly American audiences for whom Dear Brigitte (also 1965) was as close as they'd ever come to French cinema stayed away, but there were lines around the block when it played American "art house" cinemas five years later.

Love it or hate it, Criterion's new Blu-ray offers a stunningly beautiful high-def transfer that does justice to Godard's ironically sunny look of the film and its emphasis on bright primary colors. It may be the best-looking high-def transfer of a Techniscope title thus far; it's certainly miles ahead of MGM's The Good, the Bad, and The Ugly and better than the UK Blu-ray release of The Ipcress File, to cite two contemporaneous examples. And here's another one: at one point I got up to swat a bug that had landed on my 45" plasma's screen - except that it wasn't a bug on my TV at all, but rather an insect resting on a painting in a shot in Godard's film.

Supporting the flawless transfer are strong and varied extras that dig deep into the film without leaving confused viewers new to the New Wave behind. Overall, this is one of Criterion's best discs in any format, high praise indeed. 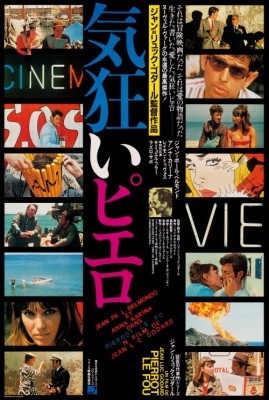 Unhappily married Ferdinand (Jean-Paul Belmondo) abandons his wife and children and takes to the road with babysitter Marianne (Anna Karina), coincidentally a former lover. She's mixed up with Algerian gangsters, though Ferdinand is unfazed when he finds a bloody corpse on her bed and crates and crates of pistols, rifles, and machine guns scattered about her apartment. Simultaneously wanted by the Sûreté, his family and her criminal associates, the couple unleash their respective Ids, embarking on a Bonnie and Clyde-esque cross-country crime spree, from Paris to the Mediterranean. On the run to nowhere, eventually even their freewheeling but still confining life of crime bores them, especially when Ferdinand (whom Marianne calls "Pierrot" throughout the story, for no reason other than to annoy him) settles into a Robinson Crusoe-like existence, lying on the beach devouring books and writing (pretentiously) in his journal. "We are dead men on parole," is one such entry. "And the trees?"

Pierrot le fou is alternately striking, clever, and funny, but also laborious, self-important, and painfully indulgent. Criterion's Blu-ray puts the film in the best possible light, pointing to its many achievements and attributes while putting the film into (all-important) perspective, that it daringly if also ostentatiously breaks away from conventional narrative cinema.

For a long time it was believed Godard shot the film without a script at all, though Karina, Godard's wife at the time and a frequent collaborator, has since not only disputed this but insists Godard meticulously planned every scene well in advance. Such assumptions were understandable however, as Pierrot le fou is episodic and at times looks almost amateurish: actors screwing around in front of the camera.

The impromptu, relaxed look of much of the film, whether really improvised or carefully planned, undeniably startled audiences when it was new, and some of this audaciousness still holds up and in many ways the film plays very modern even now, while other scenes have become hopelessly dated. There's a still-hilarious party scene at the beginning where all the guests (save Belmondo's Ferdinand) talk just like ad copy, extolling the virtues of new car models, perfume, and so on. Godard shoots this with the actors bathed in bright primary colors, which the high-def transfer captures wonderfully well. More conventional but hilarious is a shaggy dog story told by a lunatic on a pier (French humorist Raymond Devos, very funny), an apropos-of-nothing break from the action while Ferdinand searches for Marianne.

Later in the film is a shockingly still-relevant scene (especially in light of recent events) with Ferdinand, briefly held captive by the gangsters, essentially being tortured into revealing Marianne's whereabouts. Though not exactly water-boarding, what the character is subjected to comes awfully close to that, in what European audiences would have immediately recognized as directly referencing the French torture of prisoners during the Algerian War.

Conversely, there's also an embarrassingly overdone and obvious segment with Ferdinand and Marianne earning money by entertaining American tourists with a "Vietnam War" mini-play they stage, he as "Uncle Sam's nephew," she as "Uncle Ho's niece." Predictably, the hick Americans eat it up, cheering on the violence ("Hey, that's damn good!" says one) but Godard's ham-fisted criticism of American imperialism is undermined by Marianne's grotesque bright yellow-faced caricature, complete with exaggerated faux Oriental accent.

Like the Charlie Chan movies - which featured neither yellow-faced caricatures nor exaggerated faux Oriental accents - Pierrot le fou is a labyrinthine mystery its audience isn't necessarily meant to solve or even make sense of: just sit back and enjoy the colorful ride. There are numerous striking images, but their point is often obscure if there's any point at all. One example: Ferdinand and Marianne come across a short stretch of freeway overpass, maybe 15 meters in length, literally in the middle of nowhere, French farmland, with a car tangled and wrecked beneath it, complete with two bloody, undisturbed corpses. What's it doing there? Who knows? (Fatal, stylized car accidents turn up in a number of Godard's films.)

Pierrot le fou is a great-looking movie that deliberately imitates the stylization of old Hollywood ones - note the especially and possibly deliberately fake night-driving scenes, obviously shot on a soundstage - to comic books (they carry a copy of La Bande Des Pieds Nickelés around with them for most of the story).

The film is better appreciated by those familiar with Godard's earlier films, partly because the director so clearly is looking back on what came before, but also because its exploration of man-woman relationships reflects his own simultaneously decaying one with wife-star Karina. Though more accessible than many of Godard's later, sometimes excruciating films (e.g., King Lear, one of the all-time worst), first-time viewers are still advised to take in Godard's films chronologically. 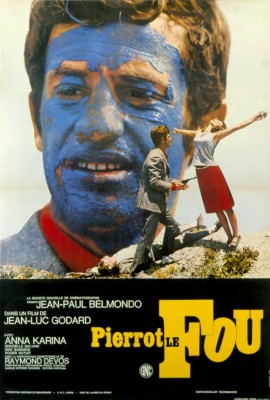 Filmed in Techniscope, Pierrot le fou's transfer, from the original camera negative, has been approved by its cinematographer, Raoul Coutard, with a lot of digital clean-up. The '60s pop art look has been gloriously captured while the condition of the film, by all appearances, suggests a brand new movie. (Is Belmondo really 76 years old now?) Though the mono audio was sourced from a 35mm optical track print, it sounds just fine. The optional English subtitles stay within the frame, for those who care about such things.

The supplements include a new video interview with charming and unpretentious actor Anna Karina (15 minutes); a "Pierrot" Primer, a new video program of film clips running 36 minutes with audio commentary by filmmaker Jean-Pierre Gorin. It plays much like a stuffy film theory lecture.

Also included is Godard, l'amour, la poésie, a fifty-minute French documentary about director Jean-Luc Godard and his work and marriage with Karina, and his early films up to the release of Pierrot le fou. Also included are enlightening French TV archival interview excerpts with Godard, Karina, and actor Jean-Paul Belmondo, including behind-the-scenes footage and at the Venice Film Festival. An English-subtitled French theatrical trailer is also included.

Finally, there's a thick, full-color booklet running 45 pages that includes a short cast and credits list, a new essay by critic Richard Brody, a 1969 review by Andrew Sarris, and a 1965 interview with Godard, all of which are extremely useful and insightful.