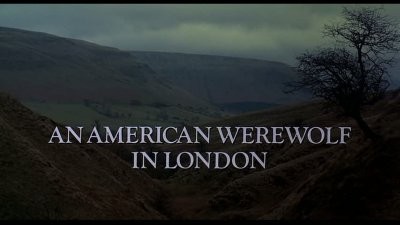 Halloween is truly a bizarre holiday - at least in the way it is celebrated in the United States. Its roots in the Celtic festival Samhain and the Christian tradition of All Saints' Day have given way to the embrace of all things macabre. This is the aspect of the day that appeals to me. There is another side to Halloween, though, and as an adult, the Carnaval-like aspects of the holidy seem arbitrary, adolescent, and absurd. Last year, I spent Halloween in Manhattan, and dressed for the occasion (the first time I'd done so in fifteen years). What I witnessed were hordes of nominally grown-up revelers who turned the holiday into a travesty of drunken excesses, riot-like street conditions, and - most shocking of all - a total absence of candy. It was like being inside the toxic bowels of an autumnal Mardi Gras. I obviously prefer the quieter, indoor version of Halloween - with candy. The fall is the season for the macabre - a time of decay, when the very trees rot in front of our eyes - and it is of course the time of year for horror films.

Of the countless films in my multi-annual Halloween movie rotation, An American Werewolf in London holds a special place. Not only does it ideally create a mood of neo-Gothic horror, but it's an exceptionally well-made film with sharp plotting, pacing, and photography. Universal's new "Full Moon Edition" improves upon the previous release with the inclusion of a feature-length making-of documentary.

The opening sequence, which finds our two protagonists David (David Naughton) and Jack (Griffin Dunne) backpacking across the moors of northern England, is effective in setting the mood. (The use of music that is both iconic and ironic, in this case a soundtrack full of songs with "moon" in the title, is a typical Landis touch that has since become a standard device in the filmmaking toolbox.) The fog, the medieval village, the local legends - it's all a loving homage to the Universal horror films of the 1930s and '40s. There, Jack is killed by a werewolf, but David survives and repairs to London, where he recuperates and starts to receive visits from Jack's decomposing corpse. Jack informs David that he's been infected by the werewolf that attacked them and that he will soon begin to attack others unless he kills himself. But David has fallen in love with one of his nurses, Alex (Jenny Agutter), and in fact moves in with her after being released from the hospital. As Jack predicted, David undergoes a transformation during the first full moon and goes on a rampage. Jack's corpse returns, along with those of David's victims, to urge him to commit suicide before his next transformation. David struggles to cope with the extent of his dilemma - the impossibility of reversing the werewolf's curse, and his love for Alex, make it difficult for him to choose the right action. 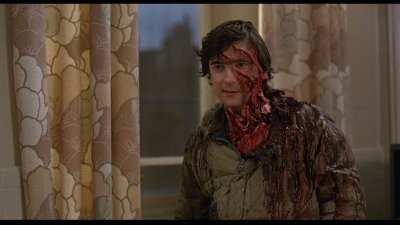 An American Werewolf in London is remembered for its make-up effects, its sense of humor, and mood. But the film is cleverly crafted all-around, with fine performances by the leads and a sense of directorial control that Landis wields with intelligence and wit. Naughton is appropriately tortured as David, unable to fully comprehend what has happened to him; his baffled anguish is leavened by Dunne's droll presence as Jack, whose progressively rotting corpse is a technically inventive landmark of visual gallows humor. Agutter is almost too lovely for the film in a way, yet she lends credible emotional weight to the underwritten character of Alex. 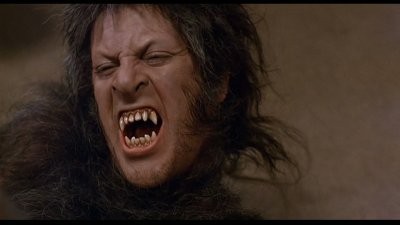 The make-up and prosthetics were revolutionary at the time and are still eye-popping as practical effects; Rick Baker won the first-ever Oscar for Makeup for his work on the film (the first of six so far for Baker). The transformation scenes represent something that was artfully avoided by most directors working in the genre - the physical transformation of a human being was just too difficult to accomplish successfully. Here, we see David's limbs, torso and head expand and change in ways never before attempted, and which have not been matched in terms of make-up effects.

Landis' overall style combines Don Siegel's affect-less cut-to-the-chase storytelling with the occasional, well-placed moment of flair. The London Underground sequence comes to mind, and so does the opening on the Yorkshire moors, as examples of well-orchestrated, visually-memorable sequences that are also important in the advancement of the story. Memorable visuals often stand alone in films, as distinct shots that could exist outside of the story; Landis allows them to grow organically from the setting and plot, and when we remember them, it's always within the context of this specific movie. I admire Landis as a director generally; his comedies especially are consistently inventive even when they are bad, with a controlled feel often developing into unpredictable set-pieces. With An American Werewolf in London, Landis took a well-worn horror-film trope and re-built it around a realistic emotional core. 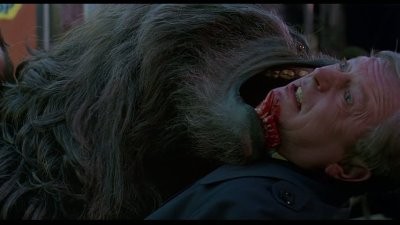 That core dictates the harsh but sensible ending. For those who have not seen the film, I won't discuss what happens, except to pose the question: What else could have happened? Certainly a remake or a similar story produced now with Hollywood backing would opt for some clever, contrived, and absurd resolution that finds David retiring to the Scottish highlands with Alex. Landis carries the story to a natural, plausible outcome, and ends the film there abruptly. In doing so, the audience's intelligence comes away unscathed, and upon reflection, the relationship between David and Alex as part of the central conflict grows even more significant.

This kind of analysis is perhaps a bit much for a horror flick, but I've seen the movie seven or eight times now. I love this film, and many horror pictures, but am not a fanatic about the genre. So what is so special about An American Werewolf in London? I think it's simply a well-crafted film, with a love of that craft so obviously front-and-center. The creation of a distinct mood around sympathetic characters, along with a totally credible resolution of the plot's main crisis, are components rarely found in the average horror film. In other words, even though the reliance upon the suspension of disbelief is usually ratcheted up several notches in genre films, Landis and crew stick with the basic tenets of good storytelling that we expect from any decent film. 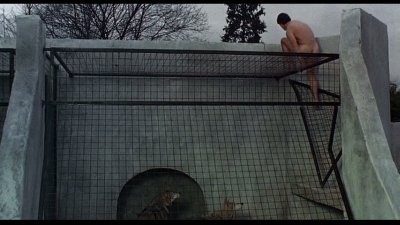 The Package
The two discs are housing in a single-width keepcase adorned with tasteful new cover art. 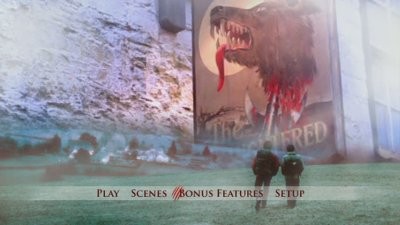 The Video
The packaging announces that the picture has been newly remastered, and it is an improvement Universal's previous release. The older DVD's picture was quite broken up, with very dodgy blacks and significant artifacts. This one is a much cleaner presentation. The anamorphic 1.85:1 transfer ably recreates the overcast look of the movie while preserving film grain and avoiding over-sharpness. The transfer boasts fidelity not only to the look of the film, but to the way films in general looked in the late '70s and early '80s - drab, muted, and a bit gray with realistic lighting schemes. A pleasure to look at.

The Audio
The main English Dolby Digital 5.1 soundtrack is ported over from the previous release. I read that this mix includes newly-added effects for the surrounds (well, they were new in 2001 or so). This makes sense, since the film was originally released in mono (!). Therefore it is understandable that the track relies heavily upon the front channels, with the surrounds reserved for occasional atmospheric effects. There was a DTS track on the previous release, too, but it has been yanked from this one. There is, however, a French-dubbed 2.0 track. English, French, and Spanish subtitles are optional. 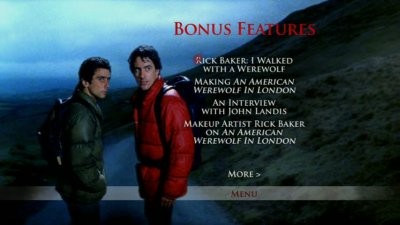 The Extras
All of the extras from the previous edition have been ported over here, with a couple of new additions.

Disc One: We start off with a very engaging and funny commentary track with stars David Naughton and Griffin Dunne, which can also be found on the previous DVD release. They clearly enjoy recounting their experiences on the production, which makes for an involving listen.

The featurettes start off with a new one called Rick Baker: I Walked with a Werewolf (7:31) in which the legendary make-up artist discusses what inspired him to follow this very particular career path, his experiences on Werewolf and how they are informing his current work on the in-production remake of The Wolf Man. (I just learned today that the release on this one has been pushed back - yet again.)

The rest of the extras are from the prior release. Making An American Werewolf in London (5:16) is an interesting behind-the-scenes EPK from the days when these were rather more idiosyncratic and entertaining than they are now. An Interview with John Landis (18:20) is a walk down memory lane with the enthusiastic, jokey director. Make-Up Artist Rick Baker on An American Werewolf in London (11:15) is an insightful interview that duplicates some of the memories recalled in the new Baker featurette, but is well worth watching, especially since there is a fair amount of unused effects shots here. Casting of the Hand (11:00) comprises some fun behind-the-scenes footage of the film's make-up effects. A few Outtakes (3:09) culminate in a NSFW sight gag no doubt staged just for gag reel. An animated Storyboards reel (2:29) is shown side by side with finished film clips. A still Photograph Montage (3:45) is accompanied by selections from Elmer Bernstein's score.

Disc Two: The sole extra here will drive those who own the previous release to purchase this one. It's a brand-new documentary called Beware the Moon (1:37:33). While it is mildly redundant of the information in the older extras, this is a fantastic, detailed look at the film from conception to release. All the major players - Landis, Baker, Naughton, Dunne, Agutter - contribute to this very thorough documentary.

As an unapologetic fan of this film, nothing about this "Full Moon Edition" disappointed me, although the missing DTS track may annoy some. Ideally, I'd also prefer the film's original mono track, but that was never on the DVD or HD-DVD releases. But what we do have is a very fun movie, presented responsibly, with an informative selection of extras. For owners of previous editions, the new documentary and a low price make this a worthwhile replacement. An American Werewolf in London is a perennial Halloween treat that comes highly recommended.