Blue Underground // Unrated // September 29, 2009 // Region 0
List Price: $29.95 [Buy now and save at Amazon]
Review by Stuart Galbraith IV | posted October 1, 2009 | E-mail the Author
An Italian production set and filmed mostly on location in New York with a predominantly Italian cast, The New York Ripper (Lo squartatore di New York, 1982) is a gleefully sleazy exploitation horror-thriller. It's definitely not for every taste but also too over-the-top to take very seriously. It was heavily cut for release in America and banned outright in the United Kingdom: chief censor James Ferman reportedly ordered all prints of the film escorted to the airport and immediately deported.

Current British home video versions of The New York Ripper are cut, but Blue Underground's U.S. Blu-ray presents the film completely uncensored - and what a show it is. Though its plot is workmanlike at best, its characterizations thin, as deliriously unrepentant sleaze The New York Ripper is virtually unsurpassed.

Blue Underground's presentation is outstanding, basically a flawless high-def transfer from the original camera negative, and the extra features are worthwhile. 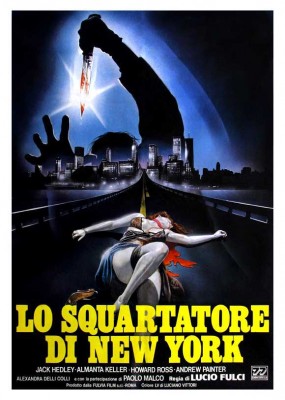 A serial killer murdering and mutilating young women, usually prostitutes, is terrorizing New York much as Jack the Ripper had London in its grip 90-odd years before. World-weary police Lt. Fred Williams (British actor Jack Hedley) is on the case, and he enlists the aide of psychiatrist and university professor Dr. Paul Davis (Paolo Malco). When student Fay Majors (Almanta Suska) survives an attack by the Ripper, clues obtained during interviews with her while she recuperates at the home of her physicist student boyfriend, Peter (Andrea Occhipinti), suggest the killer may be one Mickey Scellenda (Howard Ross), a shadowy figure with a deformed right hand.

The Italian cast mouths English in this film, but the entire picture was apparently shot silent and looped back in Italy. As such it's an odd viewing experience: All the exteriors are in New York, but clearly the voices never quite match the lip movements (and sometimes the faces generally) of the people onscreen. The New York Ripper was just one of a whole batch of Italian productions shot partly on location in America from the late-1960s through middle-'80s or so, and the integration of the Italian interiors and New York exteriors is impressively seamless.

For what it is, the movie is practically perfect midnight movie fare (especially in the 42nd Street cinemas highlighted in this movie), with craftsman-like scenes of suspense, spectacularly gory set pieces, frequent nudity and sweaty sex scenes, and a fair number of unintentional laughs. Of the latter the most obvious unquestionably is the unwise decision to have the Ripper goad the police and his victims by talking like Donald Duck. It turns out there's a reason for this, but the mush-mouth quacking amidst all the throat slashing does give one pause. The film is incredibly misogynistic, I suppose, but most will also find it too stylized and unreal to take very seriously. Still, there's plenty of evidence within the film for the deeply offended to justify their criticisms. (One victim gets a broken bottle rammed up her vagina, while in another scene a woman is assaulted by two strangers, one of whom masturbates her with his hairy toes - and she likes it!)

Whether you're a native New Yorker or not, the film offers endlessly fascinating, unblinking glimpses of the city as it was nearly 30 years ago, especially its views of pre-gentrified Times Square and 42nd Street, thoroughfares awash in sex shops and grindhouse movie theaters. You may want to linger as I did, studying the posters and marquees promoting such films as 5 Fingers of Death, 60-Second Assassin, and Revenge of the Bushido Blade. The film also spends a lot of time on the Staten Island Ferry, and in New York's subway system at a time when every square inch of every subway car seemed covered in graffiti. Few American movies offered such an unvarnished look at the city as this does.

Directed by Lucio Fulci, The New York Ripper relies on a lot of hand-held and probing zoom shots, but these never get in the way of the story as they do with the prolific Jess Franco, who was shooting like-minded films under similar circumstances. The film tries hard to stay one step ahead of the viewer; it doesn't really succeed, but deserves points for sincerely trying.

Though presented on a 25GB single-layer disc, the all-region, uncut Blu-ray of The New York Ripper looks outstanding nonetheless. Mastered from its original camera negative (with English-language title elements), the image is damage and dirt-free and razor sharp with a pleasing level of film grain and good color. The IMDb lists the 2.35:1 release as Techniscope and that may account for the level of grain and lack of anamorphic distortion/softness, though if so this would have to have been one of the last features shot in this format. In any case, it looks just great throughout.

Audio is limited to an English 7.1 DTS-HD and original English mono track. Frankly I didn't hear a whole lot of difference between the two tracks, the trying-to-get-blood-from-a-stone syndrome, but it was clean and clear with no particular audio issues. Optional English, French, and Spanish subtitles are included.

Supplements include 'I'm an Actress!' Interview with Zora Kerova, who plays a very small part in the film as an early sex show performer/victim, but who has a few interesting things to say about this production as well as other Italian movies, notably the infamous Cannibal ferox (1981). NYC Locations Then and Now is a great featurette, showing just how homogenized Times Square in particular has become. Before and after shots of the space once occupied by the World Trade Center also dominate. An international trailer is included; all the extras are presented in HD.

If you're a fan of this kind of sleazy horror-thriller, you'll agree that Blue Underground's The New York Ripper is one of the year's major genre releases, but you'll also be forgiven if the its subject matter and extreme graphic violence keeps you away. For fans though, this comes Highly Recommended.