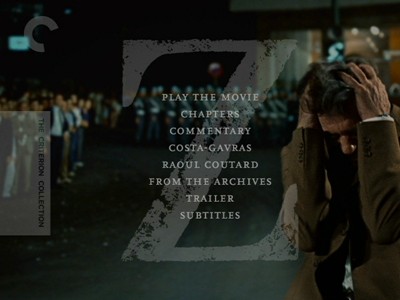 In the 1990s, when the original Rodney King trial went the wrong way despite what to most people was pretty compelling evidence, arguments were made about what we think we see versus what we actually saw. A video of a man being beaten, we were told, was not clear-cut. You see that club there? It's not actually connecting. And it's only one vantage point. You weren't there. How could you know?

Last year, there was a Hollywood movie actually called Vantage Point where the investigating feds piece together a political assassination using all the different cameras in the crowd. I never saw the movie (just like most people), but it wasn't hard to guess that the plot hinged on the idea that even with so much photographic evidence, with surveillance everywhere, the truth is still a puzzle put together from many points of view. It's the Rashomon conundrum of the digital age. The more people who see a thing, the more angles we can look at it from, the more differing interpretations can garble the message.

While that's not really the point of Costa-Gavras' 1969 political thriller Z, I was struck by how ahead of the curve he was in predicting how placing cameras in different places could show us the same event in different ways. Z is shot a lot like a documentary, an investigative procedural that has aesthetics in common with the Nouvelle Vague and the films of Francesco Rosi, and would in turn inspire Alan J. Pakula, David Fincher, and Steven Soderbergh. Z could almost be seen as a stylistic fulcrum on which the two sides of that equation balance, the link between Salvatore Giuliano and All the President's Men, The Battle of Algiers and Zodiac.

Written by Costa-Gavras alongside Jorge Semprun and based on a book by Vassilis Vassilikos, Z is a loose retelling of the real-life killing of leftist Greek politician Gregoris Lambrakis. In the movie, Yves Montand plays a charismatic Socialist activist who preaches pacifism and equality. Known only as "the deputy"--though Z starts with a statement that all resemblance to actual persons or events is far from coincidental, names are obscured and often forgone completely--the film opens on a day when he is to deliver an address to a large gathering of sympathetic followers. Police pressure has caused the Party's venue to disappear, however, and amidst the scramble to find another locale, the deputy's team also hears about a possible threat on their man's life. The deputy insists the event will go on as planned, staged on the same night as the Russian Bolshoi is performing in town. Their demonstration will provide a counterpoint to the bourgeois ostentation. 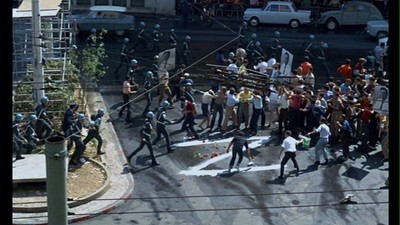 The rally is far from peaceful. As the police stand by and watch, there are multiple skirmishes and attacks, the last of which leaves the deputy bleeding in the road. The culprits, Vago and Yago (Marcel Bozzufi and Renato Salvatori), are arrested and their story about being harmless drunk drivers perpetrating an unfortunate hit-and-run is accepted as fact whereas any counter theories are dismissed as Commie propaganda. Only after the deputy dies does an autopsy reveal that his skull fracture is more consistent with a clubbing than with an auto collision. A diligent prosecutor (Jean-Louis Trintignant) and a gutsy reporter (Jacques Perrin) start digging further, and pretty quickly, more inconsistencies in the story begin to show. Connections between Vago and Yago and a right-wing religious group further reveals connections between that group and the chief of police (Pierre Dux) and his right-hand thug (Julien Guiomar). Further attacks on witnesses only fuel the prosecution, as does government opposition.

Costa-Gavras takes us through the investigation step by step. He lines up each piece in their natural order, only taking minor detours into extraneous character stuff (Vago's sexual predilections; the deputy's heartbroken wife, played with stalwart grace by Irene Papas, and even glimpses of their marital strife). Working with renowned cinematographer Raoul Coutard, who shot the bulk of Godard's 1960s films (and who also shows up on the other side of the camera as a British surgeon), he shoots most of the action as if it were a documentary. Coutard's camera is rarely nailed down, but often moving with the flow of activity, acting more as a cold witness than an active part of the story. The fact that we can be everywhere at once creates a kind of hyper-naturalism. Z looks real, but it's not bound by time or space. Flashbacks are common, quick glimpses of memory, and even moments of minor comedy.

When the deputy is struck down, we see it clearly. The truck drives by, Vago leans out and hits the man, and the crowd parts to let them leave. Or is that what happened at all? I don't think that Costa-Gavras means us to really doubt what we saw the first time, but as we see the event as it is described by others, we see how the story of the drunk driving could appear plausible from their field of vision. It also keeps us on our toes, we're never quite sure of who knows what. Even one of the deputy's own people isn't positive the man got clubbed, and when he tells the story, we don't see the fatal blow. We do see the cruel hysteria of the crowd, snippets of the onlookers and enemies circling the victim playing backwards and forwards like we're flipping through snapshots. Costa-Gavras also drops out most of the audio, leaving only the elements the witness relates. It's cinema as point of view, as unreliable and incomplete as that can be. Watching Z, you can start to understand how one can argue about the veracity of a length of videotape.

As Z moves forward, it builds up a head of steam, and the investigation gathers its own momentum. Though the prosecutor doesn't make any grand speeches, he emerges as a heroic figure, committed to fairness and the truth. He is as distrusting of any one side as he is another. Trintignant plays him without any affectation. He's as straight a straight shooter as you're likely to get. On the other hand, there is nothing selfless about the reporter's pursuit of the story, the way he always secretly takes photos even when instructed not to and is aware of the monetary value of the information he's gathering. Perrin is loose limbed and energetic, jumping around and sometimes quite literally chasing the story. These guys are like the European version of Redford and Hoffman.

Interestingly enough, despite the successful exposure of the conspiracy, Z does not end on a hopeful note. Costa-Gavras gives the film a coda where things get worse instead of better. A news broadcast by Perrin informs us of the fate many of the players suffered, and a voiceover and text scroll details a government crackdown that follows, shifting Z out of amped-up Neorealism and into Orwellian sci-fi. It's a far more cynical way to close the movie than, say, Nixon being taken down (to continue the All the President's Men comparison). In this, too, Costa-Gavras is ahead of the game. In the decades that followed Nixon's souring of the American political system, we've often seen those members of his party who succeeded him use unsavory methods to take back the respect Tricky Dick lost them. It's much easier than earning it, and much more effective in demoralizing the public so they won't question the government's methods again. The ending of Z isn't science fiction at all; it's clairvoyant. 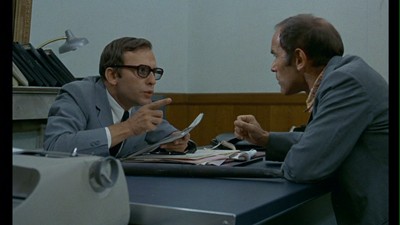 Video:
Criterion has worked with Raoul Coutard on a truly impressive new transfer of Z. The film is shown in a 1.66:1 aspect ratio, and the picture is spotless. The colors are nicely rendered, keeping the realistic color palette, and the minor surface grain is a pleasing representation of the original film stock.

Sound:
The French soundtrack receives a strong monaural mix. The tones are accurate, with good changes in volume levels without any extortion or hiss. New English subtitles flow at a good pace and read cleanly.

Extras:
The Z - Criterion Collection DVD comes in a clear plastic case with a double-sided cover. The interior booklet features a new essay by critic Armond White alongside cast and crew credits, a chapter listing, and photos. 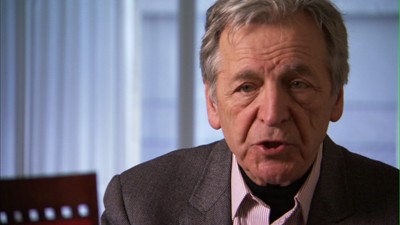 A new audio Commentary with film critic Peter Cowie is fairly essential, as Cowie digs through the layers of the movie, comparing real facts to the fictionalized version, covering history, the source novel, and Costa-Gavras' career trajectory. He also examines the movie's aesthetic.

The rest of the extras are interviews, new and old. A talk with Costa-Gavras (19 minutes, 30 seconds) recorded in 2009 features the director giving background about the post-War situation in Greece and how real events led to Z, and how those real events also made the filming politically dicey. In another piece from 2009, cinematographer Raoul Coutard (10 mins., 40 secs.) talks about his involvement and the style of the picture, including the long tracking shots and the difference of a more tightly run film set in comparison to the movies he made with Godard, how Costa's direction of his actors differed from Truffaut's, etc. He also explains how he became the British surgeon in the film and his next work with Costa-Gavras on The Confession.

The vintage interviews number three in total. The first, running 9 minutes and 35 seconds, features author Vassilis Vassilikos talking about his original novel. The other two programs are from the time of the production, with a pre-release interview featuring Costa-Gavras, Yves Montand, Irene Papas, Jacques Perrin (who also co-produced), and Jean-Louis Trintignant, and the second being post-production, with Costa-Gavras, Perrin, and Pierre Dux. The first is just over 5 minutes and is a quick news-type piece featuring each actor separately in different locations; the second is just under 4 minutes, and while the participants still speak individually, they do so in a studio environment. This section is rounded out by a short text explanation of where the materials came from.

There is also the original theatrical trailer.

FINAL THOUGHTS:
Highly Recommended. Costa-Gavras' Z is a remarkable recreation of a volatile political tragedy. Adopting a "just the facts" approach and a pseudo-documentarian style, the director sifts through the events before and after an attack on a Socialist leader (Yves Montand) in Greece, building its case and challenging audience perceptions without ever being dogmatic. The new Criterion edition presents the movie with a beautiful new transfer and a handful of informative extras, shedding new light on an important, influential picture. 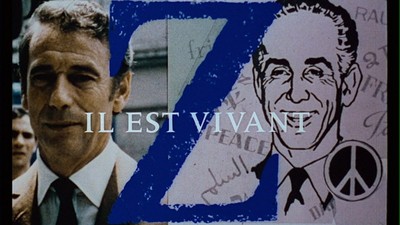