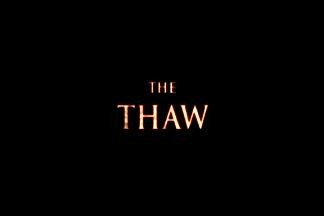 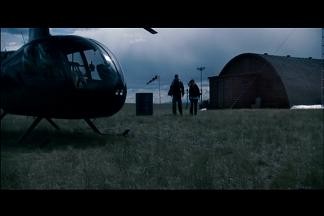 On October 14, 2008, Lionsgate, the home video distributor of quite a lot of low budget horror films, released a series of eight movies under the banner Ghost House Underground. The packaging of each disc included a clear plastic slipcover with the Ghost House Underground logo emblazoned on the right and a screaming skull underneath. It looked garish but admittedly kind of cool too. To be honest, these flicks seemed a lot like another round of After Dark Horrorfest movies (which Lionsgate also distributes).

It's now a year later, and Lionsgate has seen fit to resurrect this line (with its cool slipcovers intact) for a quartet of new releases due October 6, 2009 on both DVD and Blu-ray. Their website is located at http://ghosthouseunderground.com/ . The Thaw is one of the four titles to be made available this year.

A summary of The Thaw will likely make it sound like yet another in a long, long line of Sci-Fi Channel (well, SyFy now) low-budget creature feature tedium. Thanks to global warming, a wooly mammoth is discovered in the receding ice by a scientist (Val Kilmer) and his team stationed in a remote corner of northern Canada. Unfortunately, this extinct animal was infested with a long-dormant parasite which somehow managed to stay alive for all these centuries in ice. As luck would have it, humans are perfect hosts for these creatures - and a quartet of college students, including the scientist's estranged daughter, have arrived to the remote station to provide some additional fodder for the fast-moving critters. And yes, the typical blood-drenched B-movie mayhem ensues.

Unlike the typical SyFy movie-of-the-week, however, The Thaw comes across much more competently - and it proves to be surprisingly entertaining, despite its clichéd genre roots. I primarily credit two things.

First, the acting is fairly decent. Kilmer's performance in the role of the scientist is appropriately off-kilter. As the movie's opening credits sequence suggests, while his character has a strong public persona, he's actually got some nefarious motivation behind what he does. Martha MacIsaac (Superbad and the remake of The Last House on the Left) is convincing as the feisty daughter, and the rest of the cast are competent as well. No hammy histrionics from the actors here.

Second, director and co-writer Mark A Lewis takes full advantage of the location: British Columbia. This movie has an air of authenticity to it. The research facility feels isolated thanks to the area's solitary vistas of undeveloped land, and this helps heighten the ominous portent of the film's proceedings. In this respect, the film is reminiscent of the two version of The Thing.

All in all, The Thaw won't go down in the annals of great horror filmmaking. But, despite its well-worn science fiction premise of a resurrected prehistoric threat to humanity's existence, the movie is produced well - and it manages to be entertaining. Recommended. 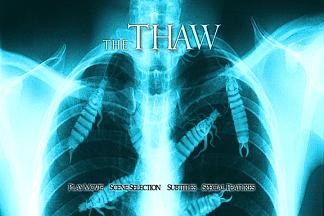 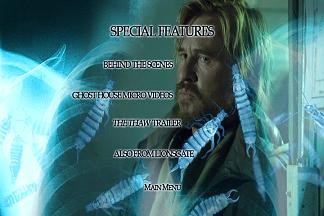 Lionsgate gives The Thaw an anamorphic widescreen presentation with a 2.35:1 aspect ratio. The image had strong details, although colors appeared slightly faded. The latter may have been a stylistic choice, but it would have been nice to have a richer color palette for the location footage.

The sole audio track is an English language Dolby Digital 5.1 affair. Dialogue was always clear. The mix wasn't especially dynamic, but this movie didn't offer a lot in the way of sound effects to warrant it.

Optional subtitles are available in English and Spanish.

Ads for the original Ghost House Underground titles and the website Break.com, as well as trailers for The Children, Offspring, and Seventh Moon, precede the main menu. They're available collectively in an Also From Lionsgate link in the Special Features submenu, which also sports a separate link for a trailer of The Thaw.

More significant extras include a fairly standard Behind the Scenes (13:25) featurette with soundbyte comments from the cast and crew intermixed with shots of the film and its making.

A good cast and nice location footage of British Columbia compensate for a clichéd concept and routine script. The Thaw is a modestly successful fright flick and comes recommended.