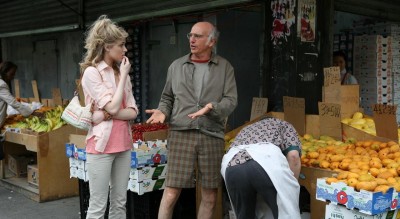 Last summer, Sony Pictures Classics took an unusual route and withdrew the latest Woody Allen film, "Whatever Works," from customary review coverage after a majority of the nation's critics didn't take too kindly to it. While not known for their welcoming attitude toward the press (especially from us fanged, baby-eating onliners), the studio inadvertently set a precedence with this move, making it the first Woody Allen picture to actively swat away his most vocal supporters. Finally catching the feature on Blu-ray after taking an absurdly stubborn stance of protest this summer, I have to say with all honesty, Sony Pictures Classics probably made the right choice to pull the picture away from further negative response.

An atheist, philosopher, and misanthrope, Boris (Larry David) is living life on his terms, watching as the rest of society plugs into the blind foolishness that gets them through the day. Bringing Melodie (Evan Rachel Wood), a young homeless girl, into his home for short-term shelter, Boris finds a naive southerner who can't get enough of his acerbic way of life. The two grow close and eventually marry, much to the horror of Melodie's mother, Marietta (Patricia Clarkson), who marches to New York City to find her missing daughter, only to end up overwhelmed by the liberal permissiveness of the community, soon indulging in the photographic arts and extreme sexual conquests. Hoping to break the married couple up, Marietta enlists Randy (Henry Cavill), a handsome man who takes a liking to Melodie, going behind Boris's back to romance the young lady.

The gimmick of "Whatever Works" is the casting of Larry David, taking a role traditionally reserved for Allen himself. It's a lateral move of neuroses and cantankerous witticisms, and for fans of David's cult show, "Curb Your Enthusiasm," there's a novelty watching the comedian snatch a role with some tangible dramatic ornamentation; David is required to give a performance here, not just play himself. While fired up, David is the obvious weak spot of the film, delivering a stiff, unconvincing portrayal of a man who understands "the big picture" while the rest of the sheep go about their business. Breaking the fourth wall (Boris is so crammed with awareness, he "sees" us, the audience, watching him) and delivering elongated monologues on the way of the world, David can't keep up with Allen's verbose fluidity, remaining surprisingly unconvincing throughout the film. Failing to generate sparks with Wood or convincingly sell Allen's customary display of comedic and intellectual entanglements, David is overwhelmed and it shows.

David's lame performance wouldn't normally smother a Woody Allen experience, but he's all the filmmaker has for the first half of the film. Matters improve exponentially with the arrival of Clarkson, who, along with Wood, plays a dim-witted southern caricature with amazing inexperienced expression and, as a woman on a marriage-breaking mission, venom. Though Clarkson is a breath of fresh air here, Allen moves the focus of the second half over to Marietta's sexual and artistic awakening. The film's theme is the acceptance and willingness to live life as it comes, making the most of what's presented to you. Very nice. While that attitude applies to the episodic narrative, pushing Boris aside doesn't come naturally, especially when it's been established that he's the center of attention. Allen wanders away too quickly, roughly moving between subplots in a mad dash to sell the core principles of the script.

The AVC encoded image (1.78:1 aspect ratio) registers very strongly for a Woody Allen production. With minimalist cinematography, the BD experience is excellent maintaining the bustling NYC street life intention, with stable colors that bring Boris's neighborhood its personality. A faint appearance of grain lends a film-like texture to the image, solidly reinforcing Allen's low-fi touch. Some detail is swallowed in low-light sequences, but the facial elements are well cared for.

The 5.1 DTS-MA audio event on "Whatever Works" keeps in line with previous Allen sound mixes. It's a simple balance of furious dialogue exchanges and symphonic interludes, and everything is balanced properly to enjoy both ends of the experience. Music cues are lush and forceful, sounding more naturally dynamic, and the actors contribute with clarity. Some surround atmospherics are offered for neighborhood scenes, but it's a very subtle touch.

Riddled with dry patches and moldy jokes, "Whatever Works" is Woody Allen's most ineffective effort in some time, limping to the finish line. Though highlighting a few convincing philosophical points and generous opportunities for irritable rants, Allen is fast asleep here, guided by a lead actor with no experience for this type of performance baggage. Thought to be a match made in heaven, the magical pairing of Larry David and Woody Allen turns out to be one unfunny snooze.