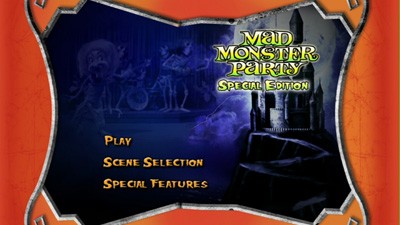 When I was growing up, cable television and VCRs were still pretty new and not yet a staple in most houses. This meant that most of my film discoveries were made via the various local TV channels in Los Angeles that broadcast syndicated programming, be it the daytime cartoon shows I watched after school or the various movie nights and weekend specials. It was on one such station that I first saw Mad Monster Party, a 1967 Rankin-Bass feature-length animated feature about, well, a party where all the iconic horror monsters came together for one gargantuan hurrah. I had never heard of it, but it only took a couple of minutes to become one of my favorite things ever. Knowing that most of the programming on this particular station was on a rotating schedule, I anxiously waited for it to come back around again, and for the next several years, watched it every six months or so. That was what we did back then, we didn't have easy access like we do today. They'd air The Wizard of Oz once a year and families would plan full evenings around it. Mad Monster Party's turns at bat were an event. If I missed it, it would be another six months or more before I'd get to see it again.

It's important to remember how spoiled we are now. Today we can have our favorite movies at our fingertips and actually choose to watch something else. There isn't the same specialness anymore, no scouring the TV Guide to figure out what is on and having to plan for it. I could have watched Mad Monster Party two times a year or more since I first bought it on DVD in 2003. I haven't. It's taken six years and a new reissue to get me to give the film another spin. That's kind of sad.

Mad Monster Party is a silly musical comedy brought to life by the signature Rankin-Bass Animagic style, a combination of puppets and stop-motion that is probably best known from the various Christmas specials the studio put together and that still get annual airings on the networks. This theatrical feature was co-written by Mad Magazine-pioneer Harvey Kurtzman, and it features character designs by his Mad cohort Jack Davis. Boris Karloff stars as the lead vocal talent, playing Baron von Frankenstein, a scientist on the Island of Evil who has just discovered the secret of anti-matter, the destructive counterpart to the reanimation tech that allowed him to bring a man back to life as a monster. That creature still lives on the island with the Baron, alongside its mate, a character voiced by and physically modeled after comedienne Phyllis Diller.

Also on the island is the redheaded bombshell Francesca (Gale Garnett), who has the body of Mad Men's Joan Hollaway but who sounds like Kathleen Turner at her purriest. (In other words, a relative of Jessica Rabbit.) Francesca is a bit distressed to discover that amongst the famous filmland baddies that the Baron has invited out to see his invention--Dracula, Wolfman, the fishy Creature, Dr. Jekyll, the Mummy, the Invisible Man, and the Hunchback of Notre Dame--is a regular human, Felix Flakin (voiced by Allen Swift, who does all the other male characters, as well, and quite remarkably so). Felix is the Baron's heretofore-unknown nephew, a clumsy Jimmy Stewart-type, and the Baron is going to retire and give his demented mad-science empire to the boy. Francesca wants it for herself, and so do the other monsters. Felix better watch out--he could lose his life, or he might lose his heart. Yes, there is romance, too!

Full of goofball gags and all kinds of horror movie puns, Mad Monster Party is an antiquated but still very fun kid's picture that, though mostly tame, also has a few winks at the grown-ups in the audience. Francesca is clearly a character designed to appeal to the fathers doing their matinee duty. She delivers the occasional double entendre and even ends up getting stripped down to her underthings in one cat fight with the Monster's Mate (complete with cat sounds). Certain caricatures are also likely to only mean anything to film buffs, with the Baron's toady Tetch having been modeled after Peter Lorre and the Invisible Man having a little Sydney Greenstreet in him. There is also a parody of longhaired rock bands and the dance crazes they manufactured, with the bony Little Tibia and the Fibias performing "Do the Mummy." This and all the other songs, which are mostly in a more easy-listening pop style, hold up surprisingly well, though it's interesting to note that most of them have nothing to do with the fright flick theme. 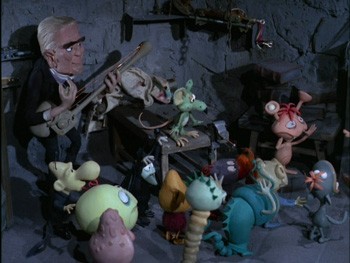 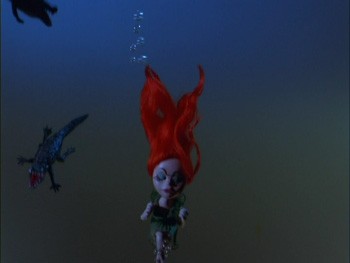 While the script for Mad Monster Party may not be as fresh as it once was (though younger viewers may not have this problem; I gave a copy of the older DVD to a very young child years ago who never stopped thanking me), the animation is still pretty cool and has a lot of inventive effects. (Francesca underwater escaping crocodiles looks especially neat.) The vintage look has a kind of toy-like purity that is hard to match or recreate. Yes, it's stiff by today's standards, but the energy of the creativity never dulls. The design work is also incredibly clever and unique. There's no explanation as to what all the bizarre creatures are doing in von Frankenstein's lab during the "One Step Ahead" musical number, but they sure do make for a crazy parade. They are kind of the 1960s equivalent of the Yo Gabba Gabba monsters. And is one of them meant to be a parody of cereal mascot Quisp?

By the end, when the monsters get organized and the much dreaded "It" (basically, King Kong) shows up, the movie is in full riot and the momentum is impossible to resist. Bottom line, I had a blast revisiting my childhood memories here, remembering how my own special bonds with film were formed and seeing the early building blocks that would point the way to future stop-motion efforts like The Nightmare Before Christmas and Coraline and to some degree the Pixar storytelling style. Mad Monster Party is as silly as it wants to be, and as silly as it should be, and going along with it makes me want to be silly, too. It's a childhood experience that can still inspire a child-like reaction in even the most cynical of adults, and for that, I will always love it.

Video:
Anchor Bay had two previous DVD releases of Mad Monster Party, once in 2003 and again in 2005. Those two discs and this new Lionsgate release were all struck from the same 35 millimeter print source, and I daresay I don't see much difference between the 2003 disc and the 2009 one. The image is clean, the resolution sharp, and the colors bright. As you can see from these screenshots, the older disc is brighter than the newer one by a very small amount, but it's hard to say which one is preferable. The darker tones might actually be closer to the intended hue; yet, the difference is also quite negligible. I'm not prepared to call for a double-dip on this evidence alone. 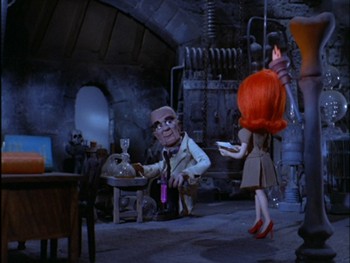 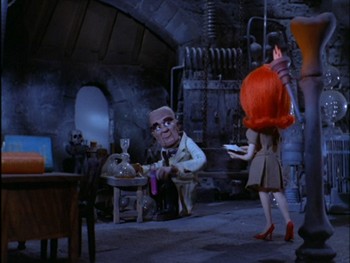 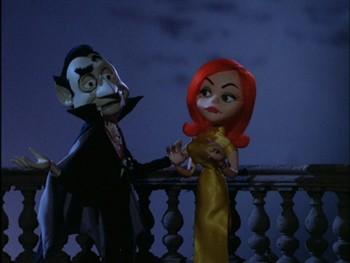 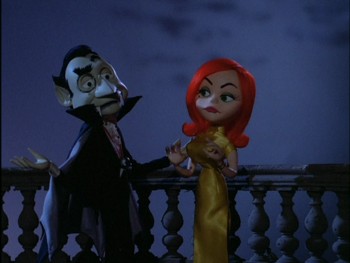 Both transfers are at 1.33:1 and preserve the movie's original aspect ratio. Since Studio Canal has controlled the rights to the material even when different studio have licensed it, it's quite possible that all the tech sources being used are the same.

Sound:
The new disc has a Dolby Digital mono mix, as did all previous versions. Again, this sounds very good, with nice tonal qualities, no hiss, no glitches. It's a remarkably well-preserved soundtrack.

There are optional English subtitles for the deaf and hearing impaired.

Extras:
Missing from the older release is the fat production booklet that came with the disc, as well as the galleries of production art and posters that appeared on the disc. This, for some, may be a deal breaker--particularly to Bruce Timm fans who want to hang on to his exclusive drawing of Francesca. I believe the 2005 version also had postcard-sized reproductions of lobby cards for Mad Monster Party. Only the fun trailer crosses over all three editions.

What Lionsgate gives us instead of these art-based features are three new featurettes:
* "Making of a Cult Classic" (14 minutes, 40 seconds): Interviews and clips run alongside production art to create a basic picture of how this movie came together. On hand are producer Arthur Rankin, historian Rick Goldschmidt, storyboard artist Don Duga, and voice actor Allen Swift.
* "It's Sheer Animagic! Secrets of Stop-Motion Animation" (9:30): Current animators Mark Caballero and Seamus Walsh give us a demonstration of the art and technique of this filmmaking approach, and they show us some of the equipment Rankin-Bass used.
* "Groovy Ghouls! The Music of Mad Monster Party" (3:40): Composer Maury Laws provides background on how he approached the score and the songs.

To go with the last feature, there are two "follow the bouncing skull" sing-alongs for the songs "Our Time to Shine" and "One Step Ahead."

Lionsgate trailers play as the DVD loads and can also be watched in the special features menu. The disc is packaged in a regular "recycled" plastic case with an outer slipcover--which, when you think about it, is kind of wasteful and somewhat defeats the purpose of the big show of the recycling.

FINAL THOUGHTS:
Highly Recommended. Yes, there is some nostalgia at play in my adoration of Mad Monster Party, so apply whatever grains of salt you will, but I think there is an appeal to this wonderfully odd animated comedy that shines even brighter than the glow of memory. Rankin-Bass' stop-motion gathering of the famous monsters from cinema past is a fun and kooky flick, blessed with the off-kilter talents of Mad Magazine alumni Harvey Kurtzman and Jack Davis, memorable songs by Maury Laws, and the groovy 1960s vibe of the character designs, now considered retro but just as classically cool as they ever were. If you already own this movie on DVD, it's up to you whether you think the different extras are enough to replace or supplement your older discs (it's really an even split, I'd say), but on its own, this new "Special Edition" is very good and quite essential. 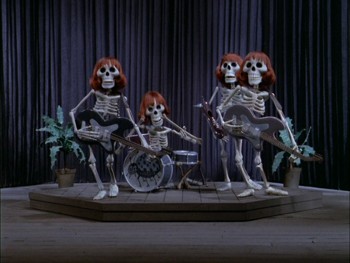 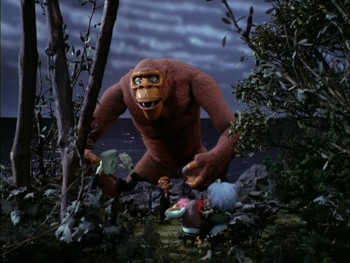