Fox // Unrated // October 6, 2009
List Price: $39.98 [Buy now and save at Amazon]
Review by Stuart Galbraith IV | posted November 14, 2009 | E-mail the Author
Aggressively, flippantly postmodern, Ally McBeal (1997-2002) is the kind of show viewers seem either to love or loathe; either they embrace its neurotic title character and her eccentric co-workers or despise the show's debatably anti-feminist tone and super-stylized approach. The program was briefly a pop culture phenomenon around the middle of its second season, but like other shows created by prolific attorney-turned-writer/producer David E. Kelley, Ally McBeal took a sudden nosedive both creatively and with audiences during its last year.

Though its popularity (if not its minor cult status) was short-lived in America, in other parts of the world Ally McBeal was enormously successful and influential. In Japan, for instance, the series has been on DVD for years (as Ally My Love) - half-season sets were released way back in 2001-2003. Along with The X-Files and ER, Ally McBeal video rentals in Japan helped bring about a renewed interest in American TV shows, which like in many other countries had long been subservient to domestically-produced shows. I'm no expert on Korean television, but Ally's romantic comedy approach, along with the abundance of iconic pop tunes on the soundtrack, seems to have been a major influence on Korean comedy-drama as well.

In any case, in the U.S., music rights issues that would force Fox to replace its oldies-heavy soundtracks seemed inevitable. Fortunately, a deal was worked out and Ally McBeal - The Complete First Season is now out on DVD intact: uncut, and with all its original music. 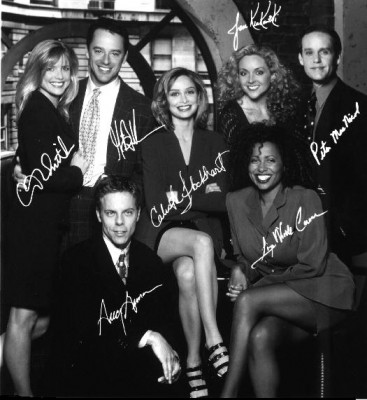 In 1995, while still overseeing Chicago Hope, the hospital drama being trounced in the ratings by the similarly structured ER, David E. Kelley made a deal with 20th Century-Fox to produce new shows for both ABC and the Fox network. The first of these were The Practice which debuted on ABC in the spring of 1997, and Ally McBeal, which premiered on Fox that fall. They were contrasting one-hour shows each set at a Boston law firm. The Practice was straight (if often highly ironic) drama about idealistic lawyers trapped in a tangled web of moral and legal complications, while Ally McBeal was, chiefly, a romantic comedy focusing more on the personal lives of its cast (though its cases often mirrored their personal problems), particularly title character Ally McBeal (Calista Flockhart), a flighty, insecure, and frequently lovesick career woman.

In the first season, attorney Ally goes to work for Cage & Fish, an aggressively commercial firm interested only in winning cases and making money, especially co-founder Richard Fish (Greg Germann), who will do just about anything for a buck. Ally's working life is complicated when she learns Billy Allen Thomas (Gil Bellows), a serious, longtime ex-boyfriend who dumped her - and broke her heart - when they were in college, also works at the firm, and that his wife, Georgia (Courtney Thorne-Smith), is an attorney occasionally attached to the firm's cases. Further, Ally must contend with other eccentric characters, including John Cage (Peter MacNicol), another insane boss, and Ally's efficient but grating personal assistant, Elaine (Jane Krakowski). Ally's grounded roommate, Renée (Lisa Nicole Carson, ironically not at all grounded in real-life), seems to be the only completely sensible character in Ally's universe; episodes often conclude with the two women dancing away their troubles at a piano bar where Vonda Shepard sings pop standards.

I had only seen bits and pieces of the show when it first aired; I much preferred The Practice, which at its best was a thought-provoking, complex legal drama before it eventually tilted heavily toward crassly sensational melodrama near the end of its run, adopting some of Ally McBeal flippantness along the way.

The most visually striking thing about Ally McBeal is its frequent surrealist sight gags, with Ally's day-dreaming or fantasizing brought to life via wild visual effects - e.g., jaws and tongues dropping to the floor in shocked reaction, as in a Tex Avery cartoon; Ally falling into a garbage truck after being dumped (again); and especially Elaine's enormously swollen head, a reflection of Ally's annoyance toward her super-confident, busybody assistant. Fans of the series loved these sight gags but I found them only a flashy, self-conscious distraction that sucked me right out of the story.

By design, the show's characters are generally shallow and many of the supporting characters are really caricatures, further distancing the show from something like a suspended-disbelief reality. (Purely for dramatic setting purposes, the law firm uses a unisex bathroom. It's the source for a lot of obvious comedy, but further strains believability.) Nevertheless, all of this is a valid approach, and for American series television an innovative one in 1997, but it only partly succeeds. Like comedy generally, you either buy it or don't, you laugh at Ally's outrageous misadventures and encounters or it leaves you cold. This reviewer very slowly warmed up to the series and its characters, but I still found the over-emphatic stylization and glib attitude bothersome.

Fortunately, angst-ridden Ally McBeal, an adult, female Charlie Brown, is a very appealing character and Calista Flockhart's electrifying performance is at least 50% of the reason. With her large, expressive eyes, pouty lips, thin, Audrey Hepburn-like figure (and her character's signature miniskirts), Flockhart is sexy while physically suggesting an almost childlike naïveté. The series briefly made her a star but almost unaccountably it didn't lead to major film roles.

Feminists didn't like Ally McBeal's sometimes needy, man-hungry women and sexist, often misogynistic men. However, most of the show's women struck me as reasonably strong and assertive, nor did I perceive anything in Kelley's teleplays (he wrote all of the first season's scripts) to imply strong women couldn't have it all - professional success and personal happiness - only that such completeness is illusive.

The show's legal cases are more background than foreground, mirroring the "A" story, but once in a while the cases themselves have the same complexities as those on The Practice. One early example casts Kate Jackson as a local news anchor explicitly fired because of her age. The legal and moral issues are explored with impressive detail and complexity, and reflect Ally's conflicted emotions at the same time. I wish more shows were like this.

Another thing I liked about Ally McBeal, an attribute common to all of Kelley's shows, is his often use of older character actors and past iconic figures of popular culture in ironic ways. Besides Jackson, a character indirectly playing off her glamorous days on Charlie's Angels, Dyan Cannon is especially memorable as Fish's "older woman" girlfriend, Judge "Whipper" Cone, an unexpectedly touching characterization.

Filmed in standard 35mm (reportedly, starting with season 2 episodes were shot with 1.78:1 framing in mind) Ally McBeal gets a fine presentation here, with all 23 episodes spread over six dual-layered, singled-sided DVDs. Regrettably, there are no Extra Features at all, but where it counts - the video and audio of the shows themselves - the set delivers. Though produced on what by today's standards would be considered a modest budget, the show looks bright and sharp and has aged well. The Dolby Surround audio, like the show's visuals, is impressively aggressive, with much audio separations and it serves the myriad songs well. Dolby Surround audio in French and Spanish is included, along with English and Spanish subtitling.

I found some aspects of Ally McBeal - The Complete First Season a bit grating, but eventually I was able to go with the flow and enjoyed this first season for what it is. Its cult following is understandable, and unlike many '90s shows it dates well, and Fox is to be commended for sticking with the original soundtracks, even though this may have cost them a fortune. Recommended.