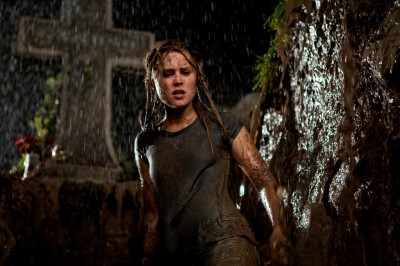 After the 1993 release of "Army of Darkness," fans of director Sam Raimi clamored for a fourth entry in his adored "Evil Dead" series of horror bonanzas. "Drag Me to Hell" is the filmmaker's first meaty scare effort since he sauntered off to make the blockbuster "Spider-Man" trilogy, but it might as well be subtitled "The Evil Dead Film You've Been Waiting For." A wicked, highly stylized fright flick, "Drag" brings out the good-humored Sam Raimi we all know and love, allowing him a devilish playground to reawaken his rascally spirit sufficiently mummified by the big-league, big-buck "Spider-Man" features. Raimi hasn't lost his touch in the years since he last galloped into screwball scares, and "Drag" is an awesome reminder that when unchained, he can still deliver the finest, wettest, slyest entertainment around.

A loan officer at a Los Angeles bank, Christine Brown (Alison Lohman) is eager to nab an open assistant manager position, competing against a brown-nosing rookie (Reggie Lee) for the honor. Christine faces a crucial professional test in Mrs. Ganush (Lorna Raver), an unsightly Gypsy woman unable to pay her mortgage, literally begging Christine for a second chance. When refused, Ganush attacks and places a deadly curse on Christine that brings three days of shadowy torment from the Lamia, a horned creature who toys mercilessly with its victims. On a race to break the curse before it rips her apart, Christine turns to seer Rham Jas (Dileep Rao) for guidance and boyfriend Clay (Justin Long) for support as she desperately searches for a way to free herself from unspeakable doom.

Written by Raimi (with brother Ivan), "Drag Me to Hell" provides only a thin membrane of a plot, setting up Christine's workplace ambition and demonic dilemma swiftly which leaves a wide open space for the director to dream up ways to torment our heroine. The narrative minimalism is quite deceiving, with the writing forgoing spurts of melodrama to amplify the conflict quickly, yet preserving a wonderfully effective character arc for Christine as she battles to outmaneuver tireless, devious satanic forces while maintaining her relationship with Clay and juggle humiliating office politics -- all of it outstandingly portrayed by Lohman, who nimbly succumbs to a classic Raimi horror beatdown while retaining much of her prized whispery charisma.

Once Christine's inexorable curse is set in motion, "Drag" transforms into a swirling sensory explosion. Working with every studio accountant's favorite rating, PG-13, "Drag" doesn't appear too interested in lavish bloodshed. Instead the picture sweats to create a mood of unrelenting unease, frequently through raucous cues that tinker with the art of the sonic shock. Now, this isn't some lazy director napping on the cheap scare button. This is Raimi, and he's a maestro with this aesthetic, swelling "Drag" with a sophisticated cacophony of 360 degree demonic agony. It's beautifully and exhaustively designed by the production.

As for the rest of the nightmare? No worries. Raimi is armed to the teeth with creepy crawly sequences aimed to freak out those who suffer easily from entomophobia. "Drag" also embarks on some rather fearless detours into animal sacrifice and gobs of goopy puke and spit humor, which adds a welcome element of laughs to this heightened phantasmagoria of misery. "Drag" slips into Looney Tunes mode every now and again (complete with anvil shenanigans), spotlighting Raimi's "Evil Dead" roots, nicely shaped and reimagined by "Drag" to knock Christine around with gorgeous, meticulous shot compositions and sumptuous exploitation of bustling sound effects. Huffing the same fumes of violent absurdity, "Drag" is an ideal pacifier for those still itching for the return of Ash.

Presented here in both Unrated (98:51) and PG-13 (99:05) cuts, the obvious differences boil down to more geysers of blood and a single scene of decision. As the old saying goes, there are many ways to skin a cat. The "Drag" BD offers two alternatives of a gruesome sacrifice scene: the Unrated cut lunges directly for bloodletting and shock, the PG-13 takes a few more breaths before the inevitable. In a rare instant of restraint crossing the finish line first, the PG-13 cut is the stronger, more demented experience (though less bloody) and the one I recommend to start with. For the curious, compare both cuts around the 49:45 mark.

The VC-1 encoded image quality (2.40:1 aspect ratio) on "Drag Me to Hell" is quite stunning at times, furthering the spooky mood with strong color representation and decent shadow detail, though some of the darker elements lose their clarity. Daylight sequences are incredibly vivid, with great preservation of the herky-jerky cinematography. Skintones are natural, with the ghoulish makeup work on Mrs. Ganush highlighted throughout the film. The image preserves a film-like appearance, making for a welcome experience filled with grisly delights. No icky detail is smudged away.

Raimi. DTS-HD sound mix. You do the math. Featuring perhaps one of the most hyperactive sound designs of the year, "Drag" finds a jolting, comfy home on BD, creating a lurid hurricane of horror sensations that make for a riveting sit. Dialogue is crisp and protected, but the score and spooky atmospherics take the cake, swirling around the surrounds with a frightening velocity, keeping the tension at a perfect boil. Plenty of LFE action greets the film's more explosive sequences, and the Lamia's attack moments offer nuanced aural cues that elevate the experience beyond the horror norm. It's a detailed, boisterous affair, and a superb counterpart to the visuals. A Dolby Digital 2.0 mix is included, along with French and Spanish 5.1 DTS tracks.

"Production Video Diaries" (35:08) is a featurette broken down into bite-sized pieces for contractual comfort, though it does play as one long BTS journey. "Hosted" by Justin Long, "Diaries" covers all the major facets of production: special effects, set design, acting, makeup, stunts, wire-work, and sound design. Interviews with cast and crew keep the mood fun, while generous on-set footage backs up the arguments. While assembled during filming (always something of a disappointment), the featurette is still wildly enjoyable, especially watching Lohman deal with a blood hose up her nose, the challenges of shooting with a live goat, and the revelation that Lorna Raver, here playing unwavering evil, is perhaps the most jovial, endearing member of the production.

"Drag" is loud, boisterous entertainment, eager to please animated viewers just looking surf the gruesome particulars of the Lamia curse, while peppering in plenty of Raimi-isms for the hardcore fans. "Drag Me to Hell" is an efficient, exceptional shocker that serves up bucketfuls of jolts and icks with eye-bulging enthusiasm. It's honestly the best horror film I've seen in ages, and it's a thrill to watch Raimi furiously twirl the knobs on a genre he excels in.