Luis Bunuel's Death in the Garden 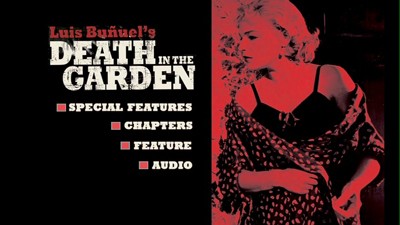 I haven't seen a lot of movies from Luis Buñuel's Mexican period, but what I have been able to catch suggests to me that this fruitful work time often saw the surrealist director turning to more conventional stories rather than the looser, more anarchic films that bookended his creative career. 1956's Death in the Garden (La morte en ce jardin) is no exception. Based on a novel by José-André Lacour, it's one half political drama, one half adventure movie, with a lot of steamy melodrama mixed in.

Death in the Garden is set in a remote South American village that has sprung up around the area diamond mines. A military revolution is underway, and the new ruling class demands that the independent miners move off their claims, surrendering their land to the government. This inspires heated protests that threaten to split the town. The scoundrel Chark (Georges Marchal) unexpectedly wanders into this charged atmosphere on his way to Brazil. Where he's coming from is never really explained, though after he drifts into the bed of Djin (Simone Signoret), the town madam, she gives him up to the police. They claim that the money belt he is wearing is full of stolen cash. It's not clear whether this is true. Chark resists his arrest, but he never really denies the charges.

Amidst all this are an upstanding priest (Michel Piccoli), an old prospector (Charles Vanel), and his deaf-mute daughter (Michèle Girardon). All three are looking to get out of town, but the situation explodes before they can. Chark escapes from prison and joins the violent uprising, and the easily identifiable prospector, who is named Castin, is branded alongside Chark as one of the instigators and a bounty is placed on both of their heads. Castin has a pretty sizable cache of diamonds, and he's in love with Djin, who will help him escape and become his wife in hopes of inheriting his riches. She books herself passage on a pimp's boat, sneaks Castin and daughter on board, and is then much chagrined when Chark, who has a grudge against her, hijacks the ship. Oh, yeah, and the priest, Father Lizardi, is there, too.

That's a lot of plot for one movie, and that's just the first half. The cops take off in hot pursuit after the fugitives, and Chark and his crew run aground midway between the village and Brazil. They have to take the rest of the journey on foot, contending with a hostile jungle they are not prepared for. Greed and their natural selfishness begin to take over as they revert to animalistic ways. It's kind of an if-you-can't-beat-'em-join-'em scenario. Humans in the wild will become wild. Here the old rascal Buñuel gets playful, filling the speakers with the cries of jungle creatures, the sounds hedging in on the wanderers as much as the trees. It's a harsh environment where the strongest isn't always the most obvious candidate. Chark--whose name is meant to sound like "Shark," just as Lizardi is a "lizard"--kills a snake, and the snake carcass is set upon by fire ants. The closer you get to the ground, it seems, the deadlier the predator.

Buñuel stages all of this potboiler action in an exaggerated fashion. The melodrama is cranked all the way up, nuanced acting taking a backseat to bald, on-the-face-of-it emoting. Though the early part of the picture has political undertones, with Buñuel and his writers taking aim at oppressive governments and the exploitation of the working class, even before the group gets to the jungle, it's clear that man is hopelessly divided. It's every crook for himself, regardless of class. Amusingly, this means some personality switch-ups. Chark grows compassionate, becoming protective of Castin's daughter, whereas Castin becomes selfish and nihilistic. Not that he doesn't have plenty of reason to hate Chark. The tough guy ends up stealing Djin, who has softened under his impromptu leadership. While before she was willing to marry Castin for his diamond bag, she surrenders the lost jewelry she finds at the site of a plane crash to Chark as a symbol of love and partnership. Through it all, Lizardi is caught in the middle, constantly compromised--or at least caught in compromising positions. Prior to leaving town, he was found in Djin's bedroom, a humiliation he must endure rather than reveal he is there to see a wanted man.

Death in the Garden is fun to watch, full of Buñuel's trademark pranksterism and evocative imagery. He plays it larger here, enjoying the wide emotional expanse the potboiler provides him. I do think, however, that the more focused first half is more interesting. The communist-leaning message gives Death in the Garden some bite, and the action sequences and dirty dealing make for an exciting plot. The jungle trek, on the other hand, feels more conventional and overly long. The broad strokes don't work as well on the confined canvas.

Things pick back up in the final reel, when all the craziness starts to take its toll. With the Promised Land in site, the last vestiges of civility drop. It's a cynical ending, paying off on Buñuel's conceit that the bad will make good and the good will go bad, and actually full of quite a few surprises. In fact, regardless of the familiarity of the territory or even the slowness of some of the walking through it, Buñuel rarely makes the predictable choice. I assume he picked such typical stories for the intended purpose of making them atypical, and he does just that. You know, it strikes me that if this script had been shot in Hollywood at the same time as Luis Buñuel was shooting it down in Mexico, it could have been a fairly decent Raoul Walsh picture. As it is, it's a fairly decent Luis Buñuel one and worth checking out. 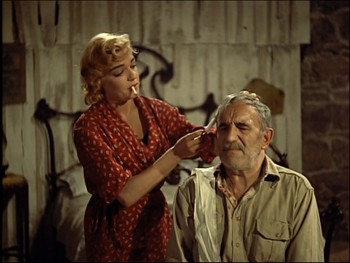 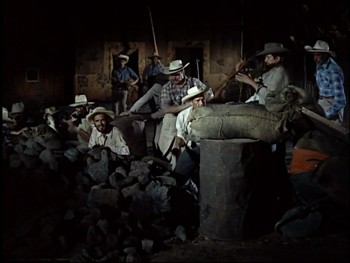 Video:
Death in the Garden is a color film presented in full frame, with the package boasting a 1.66:1 aspect ratio. IMDB suggests the film was shot at 1.37, and indeed, as you can see from the screengrabs, the size looks more in line with a standard 1.33 than it does the more European framing of 1.66.

The image looks fairly good, clean of most spotting and scratching. The colors are kind of garish, as often was the case with old 35 mm Technicolor. The transfer only falls down in terms of resolution. You will see some ghosting and some digital combing.

Sound:
There are two dubs here, one in French (thus leaning toward the French-speaking actors), and one in Spanish. The French is the default that plays automatically. Both are mixed in stereo.

The optional English subtitles are good, though slow at times, often appearing after a line has been said rather than in conjunction with the audio.

Extras:
Death in the Garden is packaged in a standard-sized plastic keepcase. A 12-page interior booklet features photos, credits, and essays about the film by Juan-Luis Buñuel and scholar Susan Hayward. 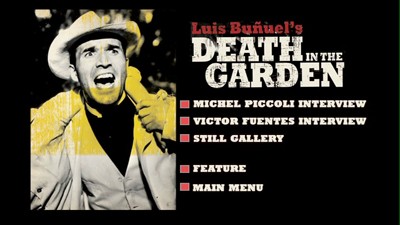 Film historian Ernesto R. Acevedo-Munoz recorded a new audio commentary for Death in the Garden, in which he explores the movie in terms of style, story, and the details of the production, placing the film in the context of Buñuel's career based on when it was made, both in relation to the story of the director's life and the development of his themes.

Two new interviews feature actor Michel Piccoli (35 minutes, 50 seconds) and Buñuel expert Victor Fuentes (24:46), both of whom look at this movie in addition to the broader subject of the director's artistic passions.

A stills gallery is set to music from the film and runs as a 1-minute, 30-second slideshow. It features on-set photos as well as publicity shots.

FINAL THOUGHTS:
Recommended. Though not up to the dizzying heights of some of Buñuel's later work, Death in the Garden is a good example of his Mexican period. Melodramatic, politically provocative, and often playful in its approach, it takes a dime-novel plot and turns it into an adventure movie that examines human nature and the animal instinct inside all of us. With Simone Signoret as a weary, untrusting prostitute and Michel Piccoli as a priest with his faith down, Death in the Garden is an enticing bit of fun. Flawed, sure, but fun all the same. 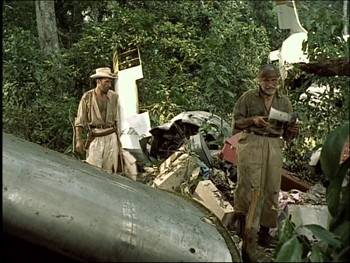 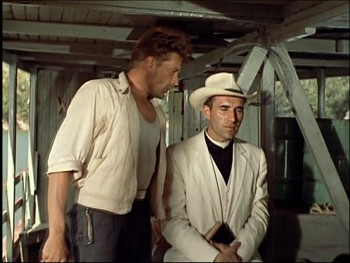