VCI // Unrated // November 3, 2009 // Region 0
List Price: $29.99 [Buy now and save at Amazon]
Review by Stuart Galbraith IV | posted December 31, 2009 | E-mail the Author
Lost in the shuffle of Universal's three classic Flash Gordon serials, the like-minded Buck Rogers (1939) isn't as fondly remembered, this despite the fact that it's practically Flash Gordon minus the bleached hair. It has the same star, Larry "Buster" Crabbe and some of the same busy supporting players, many of the same sets and stock music cues, co-director Ford Beebe, art director Ralph DeLacy and a few of the screenwriters, and an identical visual style. But it also has less interesting characters, in particular an especially dull main villain, a sharp contrast to Flash Gordon's deliciously evil Ming the Merciless, memorably played by scenery-chewing Charles Middleton. Middleton's Ming was like an outer space Fu Manchu; Anthony Warde's villain in Buck Rogers, space age gangster "Killer" Kane, resembles Ernie Kovacs.

VCI previously released the 12-chapter show back in September 2000; that DVD was pretty appalling - dark and murky and essentially unwatachable. Happily, this 70th Anniversary edition has been remastered and looks quite good - bright, detailed, and nearly damage-free. VCI titles tend to have quirky transfering imperfections, many seemingly the result of efforts to digitally hide source material damage, and Buck Rogers is no exception, but overall the "amazing, thrill-thronged" chapters (as the packaging puts it) have never looked better. Numerous interesting extra features are included. 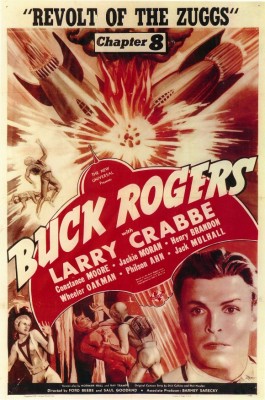 In 1939, Buck Rogers (Crabbe) and teenager Buddy Wade (Jackie Moran) are aboard a dirigible flying over the North Pole when their lighter-than-air craft loses altitude and crashes into the mountains (at the North Pole?). Fortunately, someone thought to equip the airship with experimental Nirvano Gas, which safely puts the pair in a state of suspended animation.

Unfortunately, the wrecked ship containing Buck and Buddy isn't discovered for more than 500 years (Oops!), but they acclimate themselves to their suddenly futuristic surroundings with surprising and unbelievable ease. (Sergei Hasenecz notes, "A movie precedent set by Houdini in The Man from Beyond [1922] who, frozen in the ice in the early 19th century, is revived in the Roaring '20s and doesn't even blink at the sight of automobiles.") Almost at once Buck is appointed chief strategist and leading soldier of the "Hidden City," a secret underground metropolis whose location is unknown to ruthless dictator "Killer" Kane (Warde).

Most of the plot concerns Buck's efforts to forge an alliance between his freedom fighters and the people of Saturn. However, Kane's soldiers, led by Captain Laska (a post-Barnaby/pre-Scar Henry Brandon), are constantly mucking things up, positing Buck and his friends as ruthless insurgents, which the clueless Saturnians all too easily accept without much evidence, and with hapless Saturnian Prince Tallen (Philson Ahn) usually caught in the middle.

Rogers first appeared in an August 1928 issue of Amazing Stories, in two short stories written by Philip Francis Nowlan, but didn't really catch on until readapted as a newspaper comic strip the following year, with Nowlan working with artist Dick Calkins. Buck Rogers in the 25th Century A.D. was the first-ever science fiction newspaper strip, but it was soon eclipsed by Alex Raymond's superior, more exotic Flash Gordon, which debuted in 1934.

Why Universal, which released the 13-chapter serial of Flash Gordon in 1936, and the 15-chapter Flash Gordon's Trip to Mars in 1938, would opt to make Buck Rogers as their big serial release for 1939 is unknown. Maybe they were unhappy with their agreement with Raymond's publisher, King Features; maybe they just wanted to try something different. Two Buck Rogers serials were planned, but the next year Universal made Flash Gordon Conquers the Universe, the last of its epic sci-fi serials.

Not that it matters in the slightest, as the only thing distinguishing Buster Crabbe's Buck Rogers from his Flash Gordon is his hair color; there's not an iota of difference to be found in the actor's performance. But, as usual, what Crabbe lacks in acting chops he compensates with a breezy likeability and athleticism.

The rest of the cast isn't so lucky. Ahn, the Korean-American brother of prolific Philip Ahn, is like a weakling Prince Barin. Philson lacks his brother's acting ability, though it's refreshing and highly unusual to see an Asian actor so prominently in support without any reference to his race, and Ahn performs his role in a flat American accent, minus the stereotyped Asian delivery so common among Asian film characters at the time. (In the 1930s and '40s, they usually had thick accents though Americanized teenagers like Charlie Chan's sons spoke overemphatic American slang.)

Despite being the only woman in a serial totally populated by men, radio singer-turned-film actress Constance Moore, then only 19, has little to do as Lt. Wilma Deering. The role could have been a more active contrast to perennial damsel in distress Dale Arden (from Flash Gordon), but she functions much the same. Moore would make a stronger impression as W.C. Fields' daughter in You Can't Cheat an Honest Man that same year. Jackie Moran's Buddy Wade is a routine juvenile sidekick.

Warde's Kane is the kind of character who screams at his underlings so much that it becomes almost a kind of white noise, and who petulantly executes so many of his own men you wonder why anyone would be foolish enough to back him. Making a better impression are the many supporting actors who became associated with serials (and usually B-Westerns as well): scholarly C. Montague Shaw as Doctor Huer; Jack Mulhall, Wheeler Oakman, Kenne Duncan, and Henry Brandon as soldiers on one side or the other.

The crude but colorful special visual and sound effects - great glass paintings but rudimentary-in-the-extreme miniature effects - are highly amusing. Most of the spaceships in this are oddly designed, resembling disposable razor blades or electric irons, and like the Flash Gordon serials and despite all the gee-whiz technology no one seems to know what a muffler is - all the spaceships roar like noisy lawnmowers. Many of the rear-screen background plates (particularly the busy cityscape seen outside Kane's window) is stock footage from the much more elaborate sci-fi musical Just Imagine, and that was made in 1930.

VCI's all-region Buck Rogers is spread over two discs; if memory serves, the 2000 release had the entire 241-minute serial on a single-layered flipper DVD. The image is a vast improvement over the original release. It's much brighter, there's little damage, the original titles are intact, and one can see far more detail than in all previous home video releases. It's still a bit off; sudden motion isn't transferred well for technical reasons I don't understand, but overall it's nice to see this serial at least looking on par with Image's Flash Gordon DVDs.

Writer Hank Davis contributes an amusing and informative essay about the serial, in a foldout insert that also includes two undated sample strips.

"The History of Buck Rogers" is a nice overview of the strip, the radio series, the serial, etc., even though it's basically just narration and still images. A pleasant surprise is "Buster Crabbe: The All-American Hero," which turns out to be a 25-minute audio-only autobiographical lecture Crabbe gave back in 1972 to college students. More stills and film clips from various public domain titles support it but these tend to be in good condition. Overall, a lot of fun.

Without a doubt the strangest extra is Buck Rogers in the 25th Century, a 7 1/2-minute short made around 1934 - thus predating the Buck Rogers and Flash Gordon serials by several years - apparently screened at the Chicago World's Fair and in department stores selling Buck Rogers merchandise. Setting aside its low budget, the short has an amateurishness and ineptitude worthy of Ed Wood, with singularly awful performances by the non-actors playing Buck and Wilma especially.

Also included are the first two episodes of the Buck Rogers radio series (featuring character actor Edgar Stehli as Dr. Huer); video from a panel discussion about Buck Rogers at the 2009 San Diego Comic Con leans heavily on the character's merchandising and future projects (including an Internet series), but it's nice to see Gil Gerard and Erin Gray, stars of the late-'70s TV series. An animated still gallery rounds out the supplements.

Until a Blu-ray edition comes along, this is the Buck Rogers to get. VCI is to be commended for going the extra mile with the extra features, and their transfers, as is the case here, generally seem to be improving. Recommended.