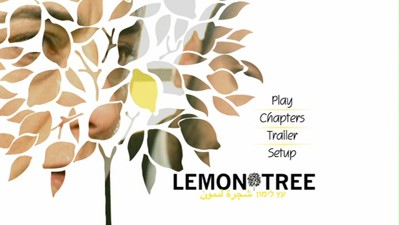 All conflicts involve people. Even the largest and messiest international battles, at their most basic, involve one person squaring off against another. This is what Eran Riklis' Lemon Tree seeks to remind us. No matter how heated the conflict between Israel and Palestine, there are still individuals who are just trying to live their lives.

Hiam Abbass, recently seen in The Visitor and The Limits of Control, stars in Lemon Tree as Salma Zildane, a widow whose children have grown and who spends her time tending to a lemon grove planted by her father. Her world is turned upside down when the Israeli Defense Minister (Doran Tavory) moves in next door. Soon there are armed guards, secret service agents, and surveillance cameras keeping an eye on Salma's lemons. Seeing the trees as a place for terrorists to hide, the security force decides it would be best if they cut them down. They expect Salma to just roll over and take it, as so many Palestinians have been made to do before. Instead, Salma hires a lawyer, Ziad Daud (Ali Suliman, The Kingdom), to fight this action. They end up taking it all the way to the Supreme Court, igniting a media controversy and stirring up trouble in the Minister's home. His wife, Mira (Rona Lipaz-Michael), is shocked by her husband's inhumanity and his quick capitulation to policy.

Eran Riklis, who co-wrote Lemon Tree with Suha Arraf, could have easily turned this movie into a cheerleading political polemic. At one point, Ziad compares Salma's battle to that of David versus Goliath, and it would have been no great leap to ratchet up the crusading and give the audience a big cause to get behind. It's been done before, and it's been done well. It's also something pretty easy to do bad, and while Riklis doesn't entirely keep Lemon Tree from getting preachy, the grandstanding moments evolve naturally from a story that is more nuanced and complex than your usual heavy-handed agitprop. Salma is a quiet woman with a simple goal, one that makes perfect sense compared to the kneejerk, self-serving establishment that is standing against her. Mira even tells her husband that she would sue him, too, if she were Salma. Her case is justified, plain and simple, no need to overdo it.

Instead, Riklis uses the empty spaces where the agitprop could go to explore other facets of the story. Salma is an unlikely hero, and some of her actions are frowned upon by her countrymen. Such fights aren't meant for Muslim women. Riklis and Abbass carefully choreograph Salma's behavior, creating a portrait of a woman who is mindful of the eyes that are watching her and how she is expected to behave, but who also yearns for something more. A small romance blooms between her and her lawyer, but it's one that cannot be, another case of the greater social construct being larger than the individual. Too many people in Lemon Tree are doing what they are doing simply because that is the accepted way of things. When confronting one of her bodyguards, Mira asks him if he ever thinks about what is going on, and he responds that it's not his job to think. Smartly, she notes that it wouldn't hurt him to give it a try.

Lemon Tree is a movie that is thoughtfully constructed. The two sides of the story have equal and parallel lines, with the similarities between the two women being highlighted even as we are made painfully aware of the differences in their social standing. Hiam Abbass is quietly effective, working with little dialogue, expressing most of Salma's story through expression and behavior. There is the language barrier--Salma speaks only Arabic, whereas the Israelis speak Hebrew--but also physical barriers. Salma and Mira never meet, they never speak, but they communicate across the expanse of the lemon grove, brief empathetic exchanges through the fence.

While Lemon Tree wouldn't be satisfying if Riklis had resorted to easy answers, it does feel a little like the writer/director didn't really know what to do with his movie at the end. We work our way through the court case and see where Salma and Mira and Ziad end up, but then they all just kind of shrug and move along, not sure where to go next. I guess that is to be expected of the Palestine problem, that there is no resolution in sight, and most stories about the region will end with the triumph of the status quo. Still, the very final scenes strain for a political statement that slams down a lot harder than the rest of the film, and it undermines the efforts that got Lemon Tree to that point. It might have been a simple matter of leaving out the physical barrier and letting what is done to the land speak for itself. Throughout Lemon Tree, Riklis lets it do just that--the cinematography by Rainer Klausmann (The Baader Meinhof Complex) is beautiful--and the health of the lemon trees demonstrates the emotional temperature of the film better than anything else. Israel's walls are superfluous next to the divide that is already there, and Salma alone but unbroken amidst the futility is far more potent an image than her enemy having boxed himself in. 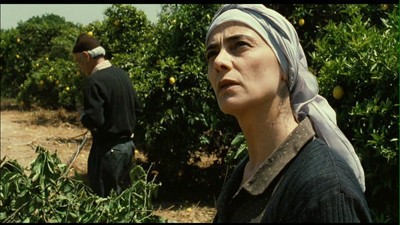 Video:
Lemon Tree has been put on DVD as an anamorphic transfer preserving its original 1.85:1 aspect ratio. The colors are warm and lovely, and the film has a marvelous natural ambience that has survived its journey from Cineplex to digital disc. Everything looks really good, I saw nothing to fault here.

Sound:
The multilingual soundtrack is mixed in Dolby 5.1, and it sounds very good. Though most of the mix is fairly straight-on, there were some nice multi-speaker touches, utilizing some of the more natural soundscapes to create a more immersive aural experience.

The optional English subtitles are pretty good, though I didn't see the point in transcribing everything, including lines spoken in English. Subtitles are also available in English for the deaf and hearing impaired, as well as in Spanish.

FINAL THOUGHTS:
Recommended. Lemon Tree is a solid drama about one woman's efforts to preserve her heritage. Hiam Abbass stars as Salma, a Palestinian whose court case to keep the Israeli diplomat who lives next door from cutting down her lemon grove becomes a microcosm for the bigger conflict between the two nations. Working on a human level and avoiding big speeches or grandstanding, writer/director Eran Riklis crafts a human story about real struggle. It doesn't entirely come together, but life never really does, either, so it's a flaw that is easy to forgive. 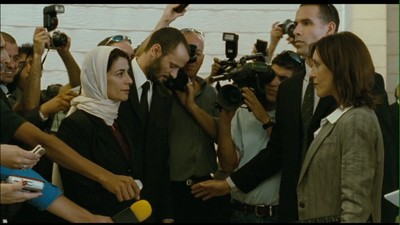