Starz / Anchor Bay // R // October 27, 2009
List Price: $29.97 [Buy now and save at Amazon]
Review by Tyler Foster | posted October 31, 2009 | E-mail the Author
Thanks to the indelible cinematic accomplishments of writer/directors Jason Friedberg and Aaron Seltzer, the world has lost patience with the parody film. 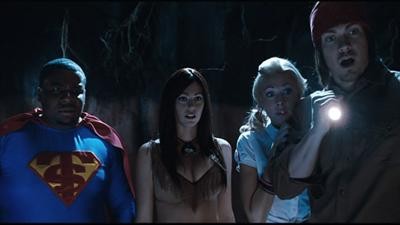 I saw Date Movie on DVD and thought it was just mediocre; nothing special, but it had a handful of okay gags and was far from the gross-out lows of the unwatchable Scary Movie 2. Then the duo unleashed Epic Movie, a film I haven't seen all of (and absolutely never will) but one that easily qualifies as one of the most aggressively, excruciatingly unfunny spectacles I've ever witnessed just on the strength of the ten or twelve minutes I caught on TV at work. Since then, the duo have only reportedly sunk lower with Meet the Spartans and Disaster Movie, and now anything of the ilk is regarded with derision. Personally, I thought David Zucker's Scary Movie 3 at least held its own against the likes of Hot Shots! and Mafia!, but then even he, one of the fathers of the modern spoof film, followed it up by directing the overwhelmingly lame Scary Movie 4 (which I was unable to finish), and producing Superhero Movie (which I wasn't compelled to see). Now, to this esteemable list, we add Bo Zenga's Stan Helsing, which ironically is much funnier when it isn't trying to parody anything.

One key element today's spoof movies lack is focus. In the 1980's, David Zucker, his brother Jerry and co-director Jim Abrahams cooked up gloriously specific crossovers like war dramas and Elvis musicals or honed in on the instantly-familiar tropes of the disaster drama to lampoon. The horror movie certainly has its own share of targets waiting to be skewered, but only the first Scary Movie even tried to attack the slasher movie structure rather than mocking whatever films happened to be currently floating through theaters. Most of Zenga's references to horror are dated and limp: Stan Helsing trots out a seven-year-old Ring gag as its first specific target and packs a roster of parody ghouls (including Freddy and Pinhead) that seem woefully out of style. Michael Myers and Jason Voorhees may still be relevant to today's audience, but it's clear that Zenga's awareness stops far short of Rob Zombie and Platinum Dunes.

That said, I always thought that even if the visual gags were the restaurant you paid to eat at, the filmmakers were really serving the dialogue and tone. Aside from obvious, stone-faced examples like Airplane! and The Naked Gun, the recent Hot Shots! series in particular seemed to take great pride and care in a deadpan line delivery, and Stan Helsing's lead actors Steve Howey (of "Reba"), Kenan Thompson, Desi Lydic and the mind-meltingly hot Diora Baird get in a few good lines and avoid exaggerated mugging. The film barely has the vaguest notion of a plot (involving the title character and his friends trying to deliver some DVDs to some relative of Stan's video store manager before hitting a Halloween party), so nearly every scene ends up clearly benefiting from the quartet's improvisational skills. Thompson's "SNL" experience just makes him stand out the most as he gleefully tosses off one-liners; hell, a couple of his gags don't even involve actual lines, just a bunch of mumbled intentions paired with an expressive face. Genre king Leslie Nielsen, always in the mood for a good paycheck, also inexplicably appears as a local waitress, a gender reversal that is never commented on or referenced. It's like the filmmakers just asked him to be in the movie anywhere, and by the time he said yes, the waitress role was the only one left.

Zenga's direction is hit and miss. I'm almost positive there's a moment early in the movie where a whole scene is deleted using a "zoom!" sound effect, as the characters seem to be in a different place several minutes later without any noticeable scene transitioning. Then again, it's hard to tell, since at least 30 minutes of this 90 minute movie are staged inside a van, without anything showing through the windows but pitch-black darkness. No doubt it saves on budget, but it's not very visually interesting, so it's a weird relief when the characters start running around an abandoned movie set. Zenga also tries to make the movie playfully sexy without becoming crass by mostly shying away from showing any nudity in a strip fantasy sequence while still having Lydic dress up in three different, increasingly sexy costumes (Baird only gets one, but it's eye-popping enough). I don't know if these choices ultimately accomplished any artistic goals, but I can't say I totally mind. What I can say is that Zenga doesn't plainly restage scenes from the movies he's meant to be making fun of, so at least that's something. He also deserves credit for the movie's funniest sequence, a hilarious slow-motion gag during a flashback to the day Baird's character previously dumped Stan -- the high chair joke is legitimate genius.

Then again, this all probably amounts to more thought than anyone has ever devoted to Stan Helsing. It's not a great movie by any means, but compared to the Friedberg/Seltzer output, it looks like a masterpiece, and it's got a handful of funny ad-libs and at least a couple of gorgeous women. At times, the key to film criticism is just taking pleasure in what you've got rather than wondering what you might have. As for Stan Helsing, some of you would hate watching a bunch of faux horror icons performing a parody version of "YMCA", and others might find it mildly amusing. Me, I like Diora Baird.

The DVD
Stan Helsing has a group cover shot that quietly but clearly takes a cue from Scary Movie's traditional theater-seat design, and not-so-quietly steals the font and color scheme as well. The Eco-Box packaging is slid into a foil slipcover that actually looks kind of nice, with the same artwork printed on both. The disc has black painted text on top of the silver disc surface.

The Video and Audio
The film is presented in 1.85:1 anamorphic widescreen and looks as good as you'd expect a 2009 feature film to look, with a high level of detail, solid black levels and bright, eye-catching colors, especially in the brief daytime and fully-lit indoor sequences. The Dolby Digital 5.1 track is a tad more on the artificial side, displaying technically adept directional effects and music cues but lacking a true immersiveness. Then again, if anyone is disappointed that they don't become truly absorbed into the aural environment of a comedy like Stan Helsing, I'd say they're expecting too much out of life. English captions for the deaf and hard of hearing are also included.

The Extras
A full-length audio commentary with writer/director/producer Bo Zenga and actors Kenan Thompson and Desi Lydic would probably be a lot more interesting if co-stars Steve Howey and Diora Baird could have been invited as well, since the trio seem to be just short of things to say. There are surprisingly few gaps of silence, but it feels like you're watching a commentary during the time when the leader of the conversation has stepped out to go to the bathroom and everyone else is just killing time.

"Killer Parody: The Making of Stan Helsing" (10:41) is a genial making-of featurette with interviews from the various cast and crew members where everyone praises each other, and, since this is a comedy, cracks a bunch of jokes. Nothing at all remarkable.

6 extended, alternate and deleted scenes (8:02) with names like "Deleted Doll Rape" and "Extended Phone Sex" are included, which feature intensely minimal differences from the final versions. The only notable one is the first one, an extended version of the strip scene, where the only difference I spotted was more actual nudity. Why Zenga cut that out, I have no idea (Update 12/28: Zenga informs me in a nice email that the MPAA demanded it). An outtakes reel (5:00) is next, featuring quite a few unfunny flubs and two genuinely clever ad-libs on Steve Howie's part. 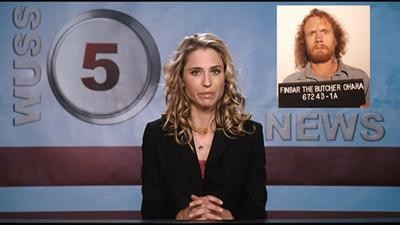 Still and storyboard galleries and the original theatrical trailer finish things off. Trailers for Grace and The Shortcut play before the main menu, and are not accessible from elsewhere on the disc. The bonus features are not subtitled.

Conclusion
Stan Helsing might make for an okay rental for the background of a Halloween party where the guests' attention is primarily occupied by something else (I know, what an endorsement, right?), but hey, if you'd rather not give it a spin, you know, no hard feelings.