Warner Bros. // G // January 5, 2010
List Price: $28.99 [Buy now and save at Amazon]
Review by Stuart Galbraith IV | posted January 14, 2010 | E-mail the Author
The first big studio American feature - though not the first American feature - about the Vietnam War, The Green Berets (1968) was widely panned by critics though quite popular when it was new, and it remains a fascinating anachronism, a Hollywood movie like no other, though as entertainment it's neither good enough to sustain its excessive running time (142 minutes) nor quite bad enough to earn it the cult classic status it nearly deserves. In any case it's a film that's been greatly misunderstood through the years, and which despite later, popular and acclaimed Vietnam movies and Wayne's enduring following, until now The Green Berets has never been given a proper home video release.

Both Warner Home Video DVD versions, from 1997 and 2007, are 4:3 letterboxed and are not 16:9 enhanced, so this 1080p high-definition Blu-ray is a major upgrade video-wise. Some may be disappointed the monophonic film hasn't been remixed for stereo and that the Dolby TrueHD 1.0 audio falls short of perfection, or note the pittance of extra features are all standard-definition carryovers from the DVD release. Still, the film's the thing and, visually at least, The Great Berets looks quite nice. 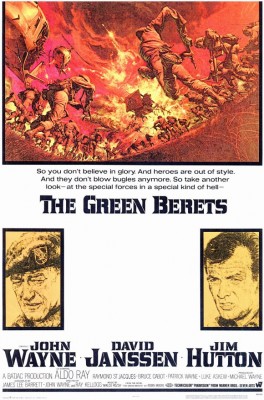 Structurally and character-wise the movie isn't all that different from the kind of gung ho war movies Hollywood made - with and without John Wayne - during World War II and which, almost without exception, avoided entirely the kind of criticism that greeted The Green Berets. The story opens at a Special Forces briefing/demonstration at Fort Bragg (though filmed at Fort Benning), where liberal reporters question America's Vietnam policy. Like his newspaper, reporter George Beckworth (David Janssen) is against the war though he admits to Colonel Mike Kirby (John Wayne) that, well, he's never been to Southeast Asia to see things for himself.

Accepting Kirby's offer, Beckworth joins him in South Vietnam. Most of the film involves the brave efforts to hold a Special Forces camp in imminent danger of being overrun by ruthless Vietcong. As they prepare for the inevitable all-out attack, other characters are introduced, including comical scrounger Sgt. Petersen (Jim Hutton), who reluctantly befriends war orphan Hamchunk (Craig Jue) and his dog; tough-as-nails Master Sergeant Muldoon (Aldo Ray), the kind of character formerly played by Victor McLaglen and Alan Hale, Sr.; kindly Sgt. Doc McGee (Raymond St. Jacques), a medic helping displaced and wounded civilians; Sgt. Provo (Luke Askew) who, oddly, dreams of being killed in action so that his heroic deeds will be immortalized with a plaque; Captain Coleman (Jason Evers), the camp commander, about to ship home after a wearying tour of duty; and Captain Nim (George Takei), the steely-eyed freedom fighter ready to take on the entire North Vietnamese Army single-handedly.

The Green Berets resembles several earlier Wayne films, in particular They Were Expendable, Back to Bataan (both 1945), and The Alamo (1960), which like this was a deeply personal project Wayne opted to direct and co-finance himself. (The Green Berets is co-directed by Ray Kellogg, a longtime second unit director.)

The film abounds in war movie genre stereotypes: the tough master sergeant, the sensitive doctor/token black, the soldier about to go home who dies tragically the night before shipping out, etc. The film is also shamelessly manipulative, particularly all the material with teary-eyed orphan Hamchunk, whose Christian missionary guardians have been murdered, whose lovable pooch is killed-in-action, and whose best pal dies at the end.

The Viet Cong are painted in the same broad strokes as America's enemies from World War II and the early Cold War years that followed. Without exception the North Vietnamese are ruthless inhuman monsters that need to be exterminated. They rape and murder a helpless little girl, a spy steals an American's lighter (lovingly engraved by his sweetheart, naturally) from a captured American soldier after brutally beheading him. In those wacky early days of the MPAA, The Green Berets amazingly got away with a "G" rating.

All this tragedy and heroic self-sacrifice only serves to make any opposition appear totally ridiculous. Probably coached by director Wayne (who often imposed his own actorly tricks on others during this time), Janssen gives a particularly embarrassing performance, his character constantly staring at his shoes like a third-grader being scolded by his teacher, refusing to look anyone in the eye - particularly Wayne - every time his liberal assumptions are proved wrong. He can't even make a halfway decent argument against torture, which Nim openly commits (though discreetly off-camera) while the others turn a blind eye.

Still, The Green Beret's grandstanding isn't any worse than that found in other Wayne films like The Alamo, and much less extreme than the virulent anticommunist hyperbole of Big Jim McLain (1952) and especially Jet Pilot (1957), the latter truly worthy of its camp classic status.

The bigger problem with The Green Berets is that it's just not very good. It was by 1968 standards relatively expensive ($6-7 million) yet, oddly, looks rather cheap. Wayne received unfettered cooperation from the military, and made the decision - not a good one - to shoot nearly the entire film on location in Georgia. Georgia. With its pine forests and rolling hills doubling for the tropical lowlands of South Vietnam.

Wayne might have been saving money having access to all that military hardware and personnel, but all verisimilitude goes right out the window the minute his characters' plane touches down in South Vietnam, which looks exactly like the Georgia military base they just came from. Unlike Stanley Kubrick's Vietnam in Full Metal Jacket, carefully recreated on an open set in Britain, The Green Berets is thoroughly, distractingly unreal - in Wayne's Vietnam, there's not a single palm tree in sight.

The lack of realism extends to the casting. By 1968 it was clear that, from the American side anyway, Vietnam was a war largely fought by minorities and poor whites in their late-teens and early 20s, not old white guys like 61-year-old Wayne, pot-bellied 41-year-old Ray, or 63-year-old Bruce Cabot (as Col. Morgan). At 33 and 37, respectively, even Jim Huttom and Raymond St. Jacques are too old to be believed, even as experienced soldiers.

The film is disjointed and aimless. The Alamoesque main story, of the outpost about to be overrun, is a Western movie cliché that the film underscores with direct references to the genre (e.g., the camp itself is nicknamed "Dodge City," while many of the Vietnamese are armed with bows and arrows). But there's no building up of tension, and characters including Wayne freely move in and out of the camp without much difficulty. The movie begins with naked propaganda and exposition and climaxes with a nearly unrelated last-ditch mission to kidnap a NVA general, which feels tacked-on.

My Blu-ray defaulted to hidden Japanese menus and language options, triggered by my PlayStation 3 player, purchased in Japan. As stated earlier, the 1080p presentation of the Panavision-lensed production is a major upgrade from the 4:3 letterboxed DVD version. The added sharpness and truer color enhances the battle scenes and the general bigness of the film while accentuating some of its flaws. Not Wayne but rather his double is clearly visible in long shots during the press briefing, for instance, and a night raid is severely marred by obvious problems with the anamorphic lenses during filming: some shots in this sequence are way out of focus in the center of the frame, though less so on the sides. The opening titles, apparently patterned after the design of those found in spaghetti Westerns, is significantly windowboxed, but the rest of the film is in its proper 2.35:1 original aspect ratio.

Warner Bros. has opted not to remix the film to multi-channel stereo, a decision this reviewer respects in principal but the Dolby TrueHD 1.0 audio (in English, French, and Castilian and Latin Spanish) is still a bit out-of-whack, with noisy sound effects overwhelming some of the dialogue and quieter scenes. English, French, and Spanish subtitles are offered.

Supplements are all oldies: The Moviemakers: The Making of the Green Berets is a short television promo film dating from the film's theatrical release. It has some great footage of Wayne on location, but no interviews and is generally uninformative. The film's hilarious trailer, in SD but 16:9 enhanced, cashes in on Sgt. Barry Sadler's hit song, trying to stay in rhythm while announcing the cast: "Fighting soldiers from the sky (John Wayne!) / Fearless men who jump and die (David Janssen!) / Men who mean just what they say (Jim Hutton!) / The brave men of the Green Beret (Aldo Ray!) This works just fine until they get to Raymond St. Jacques. I'll bet they wished they had cast Jim Brown instead.

The Green Berets absolutely should be seen once by anyone with an interest in the Vietnam War, Hollywood and anticommunist propaganda, war movies, or John Wayne. It's not a good film and doesn't hold up to multiple viewings, but the first time it's quite fascinating, and this Blu-ray edition allows viewers to see it the best way short of a 35mm screening. Recommended.