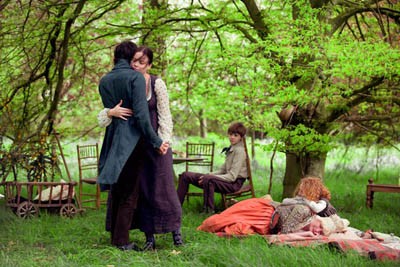 As a moody, death-obsessed writer whose genius has yet to be recognized, Jane Campion's portrayal of poet John Keats in her new film Bright Star hit a little too close to home. Depressed, misunderstood, doomed romance--hey, John, I can identify. Just tell me how I can be lucky enough to get tuberculosis, and I'll follow you all the way down. Damn my parents and their stupid vaccinations!

Bright Star isn't an all-encompassing biopic of the Romantic poet, but rather, it follows Keats over a couple of specific years, beginning in 1818 when the young writer met the love of his life and the tragic turn that soon followed. Keats is played by Ben Whishaw, who portrayed the antagonistic, on-trial version of Bob Dylan in Todd Haynes' I'm Not There (he was the one in black-and-white who wasn't Cate Blanchett). He's getting pretty good at this broody poet thing. Alternately cocky, self-loathing, and frightfully charismatic, he makes Keats a dark and dreamy apparition. Thus, it's no wonder that the pretty young seamstress, Fanny Brawne (Abbie Cornish, Elizabeth: The Golden Years), is attracted to him, despite having no understanding of poetry and thinking that wit and smooth moves on the dancefloor are the two best traits in a man. Opposites do attract, though, and both the poet and the girl have an intensity to their personalities that somehow makes them a perfect match.

Not that everyone would agree. Socially, John Keats is a pauper. His books don't sell, and he has no viable prospects, so as a candidate for marriage, he doesn't lead the pack. He's also friends with another poet, Charles Armitage Brown (Paul Schneider, All the Real Girls and TV's Parks and Recreation), a crank who is protective of Keats' talent and also distrustful of women, especially girls he sees as flirty and frivolous. Fanny fits this category as far as he is concerned, and the two spare no opportunity to express their disdain for one another. Ironically, Charles is probably more along the lines of what Fanny expects of a male suitor, even if his humor is much darker and pointed than she would like. Paul Schneider, whose previously been best known for his David Gordon Green collaborations, gives the best performance of his career as the sardonic poet. I've never seen him so comfortable in his own skin and so at ease with his lines. His previous performances often relied on a quirky naturalism that is all but gone here, replaced by a more forceful presence. Some of the film's strongest scenes come as Brown is revealed to lack the moral purity that was so valued by the Romantics. He is not John Keats, and he knows it, and he can live with it as long as no one else points it out.

Campion, who also wrote the screenplay for Bright Star, establishes a fascinating social order in the movie. No one here is entirely well off, and though they are members of polite society, there is some funds-stretching going on. One trick is apparently moving house a lot, following the changing seasons in search of cheaper lodgings. This puts the Brawne family--Fanny's widowed mother and her two siblings--in the other half of the house where Charles Brown is renting and where he lets Keats stay for free. Being in such close proximity, the romance between the poet and his new muse, which previously has consisted largely of poetry lessons, misunderstandings, and a gentle touching of hands, can take full bloom. Soon it's kissing in the forest and touching the wall that separates their beds night after night, feeling the heat of love pass between. Fanny becomes entirely wrapped up in Keats, which can feel just as bad as it may feel good since he is prone to mood swings. If he writes a line about butterflies in a love letter, Fanny catches every butterfly she can and creates an oasis for them in her bedroom; when he selfishly ignores her, she demonstrates her ineptness at suicide. Abbie Cornish is very good as Fanny. The actress understands the melodrama of adolescent angst, and she manages to make it real without overdoing it. Her most enthralling moments, however, are when she lets herself be an empty vessel silently letting Keats fill her up. 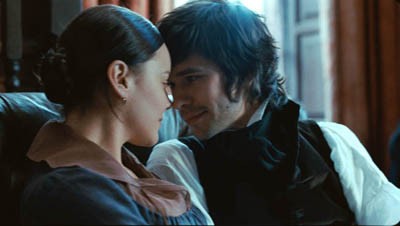 There's something refreshing about seeing a romantic relationship on film that doesn't involve sex. It's not that Campion isn't comfortable with it--she did direct In the Cut, after all--it's that she is aware here, as she was in The Piano, that the greatest passion often lies somewhere beyond physical expression. Though there is no crossing over to the other side the way the characters did in The Piano, Bright Star is more intensely realized for it. Why not a love affair that involves reciting poetry and quickly stolen glances? Brown encourages Keats to bed the girl and get it over with, hoping it will cure his friend of his crush, but Keats won't even consider it. Perhaps he sees the consequences Brown fails to consider when he knocks up the maid, but I doubt it's anything as crass as all that. Poetically, to take their relationship further would spoil it. Campion sees Keats' life as one of extremes: the butterflies and the punctured veins, dazzling beauty and dark lows. She and cinematographer Greig Fraser capture both sides beautifully. They infuse the warm summer with color and light, and yet they shoot the snow of the chilled winters with as much clarity, letting each flake stand out under a dark sky. At the same time, there is a softness to everything, as if a very thin veil of muslin had been placed over the camera lens. This faint yet ever-present whiff of grey reminds us that there is a sadness that can't be escaped in this story. Bright Star is young love on a deadline.

John Keats' death at 25 is well known. He contracted tuberculosis, which also took his brother from him not long after he and Fanny Brawne had met. Keats foreshadows this regularly by talking about his own death even when he is healthy, something Campion never portrays as ironic or dramatic, but something Keats firmly believed. Any biopic that ends in such a way is always faced with the challenge of overcoming the audience's knowledge of the inevitable, and the fact that Bright Star doesn't worry about getting around that is both one of its greatest strengths but also its only weakness. The movie does drag a little at the tail end when the closeness of death is more obvious. Perhaps had Campion not let Whishaw be so earnest in his doom and gloom we might not feel it as heavily--which could have been a bad choice all on its own. As it stands, it's a small point, and the benefits of that choice far outweigh any of the failings.

When it comes down to it, Bright Star works because it inspires the viewer to take part in the tenderness and the sorrow. In explaining poetry to Fanny, John Keats likens the act of reading to jumping in a lake. You don't dive into the water just to do so, to go under and then get out; you jump in to experience the water, to be in it. So, too, must one linger on a poem, spending time within it, experiencing its language and images and not just reading it line by line. The same could be said of a biopic, that a good one lets you walk a mile or two in its subjects cinematic shoes. Jane Campion achieves just that with Bright Star, making us part of Fanny and John's world for two hours. To watch it is not to stand at a distance, but to step right into the middle of it and feel it all.