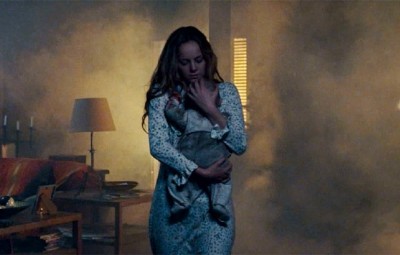 The horror remake train makes another stop with "It's Alive," an update of the 1974 Larry Cohen cult shocker. It almost goes without saying that the 2009 pass at the material doesn't match Cohen's austere initial take, but the absence of suspense or even basic waves of dread deflates this remake upon liftoff. A killer, bloodsucking baby film shouldn't be this passive and tedious.

Expecting her first child, Lenore (Bijou Phillips) has elected to leave grad school, putting her future on hold to raise the infant with her boyfriend, Frank (James Murray), and his disabled son, Chris (Raphael Coleman). When baby Daniel comes calling three months premature, Lenore goes under for a C-section, only to awaken with her baby and an operating room filled with dead doctors and nurses. Taking her newborn home, Lenore finds unusual aggression in her child, with animal carcasses strewn around her remote New Mexican home and the baby chewing away on her breast during feedings. Fearful, but hesitant to put together the clues, Lenore is faced with the ultimate test of motherhood when human bodies start piling up.

Let's be clear here: "It's Alive" wasn't some precious genre classic that needs a great deal of defending. In fact, its potency has already been thoroughly drained by creator Cohen, who pulled together two sequels to his original picture, cashing in while the gettin' was good. Oddly, Cohen takes a co-screenwriting credit on the new picture, but the end product isn't his doing. Instead the remake is funneled through director Josef Rusnak, a filmmaker with a questionable track record in the industry, previously helming pictures such as "The Thirteenth Floor" and "The Art of War II." Cohen is more of a bleak exploitation master, while Rusnak is a forgettable technician of mediocrity, and his ineffective touch ruins the delicious highs of absurdity that could've made this remake shine.

The new "It's Alive" is an anti-abortion parable, pitting Lenore against her worst fears as reluctant mother. It's a juicy concept, ripe for a profound psychological exploration, but in the Rusnak's hands, the concept is only half-heartedly executed. The director is bending the material back to more conventional ground, leaning on gore and tepid suspense sequences to deliver a basic horror experience, not an exceptional one. "It's Alive" isn't scary or weird, failing to create any impression besides boredom, and the cast is left out in the cold trying to convey a sense of panic with little cinematic energy to back up their efforts. They also suffer a specific humiliation with the film's looping overdose, breaking the moment with every kung-fu matinee moment of thickly dubbed coverage.

"It's Alive," running just under 80 minutes, doesn't enjoy much in the way of momentum. The emotions have also been trimmed from the film, with Lenore facing imaginable terror and motherly revelation, only to convey a slight sense of dismay, as if she burnt bake sale cookies. Daniel's flesh-tearing antics are equally as off-putting, mostly because the CGI here is terrible. It's hard to encourage mind-bending terror when the infant looks no better than the Dancing Baby from "Ally McBeal."

The anamorphic widescreen (2.35:1 aspect ratio) presentation suffers from some unfortunate instances of EE and a general, unnatural looking drain on the color scheme. The image also runs into some overtly contrasted corners, turning needed detail into indistinct blobs. Outdoor vistas come off the most striking here, keeping in line with the gloomy intent of the picture.

The 5.1 Dolby Digital is pretty active with suspense sequences, using the jumps shock to kick up the audio event a few notches. Infant villainy is also used well, with solid surround work during moments of attack. Dialogue and scoring is balanced agreeably, with both elements easily appreciated. Rural atmospherics are nice, but limited to only a few scenes.

Paul Solet's "Grace" delivered a similar demon baby experience this year and was far more successful at providing the necessary chills. I suppose it's all in the execution, and "It's Alive" is lacking severely in that department. Even with a workable bread crumb trail left behind by Cohen's original film, this remake doesn't take the hint, fumbling a remarkable premise on conventional filmmaking.