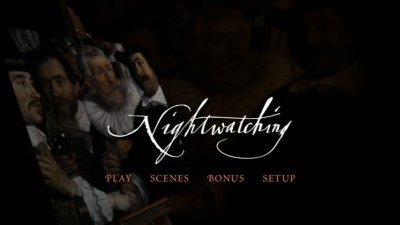 A densely layered experience such as Peter Greenaway's Nightwatching challenges a critic's ability to rearrange something that has been especially sculpted for cinematic presentation. Translating film content into prose is often easy; at least, a summary description is usually accessible to one used to working with words. But Greenaway has fashioned a film that unites so many ideas and textures - many of which are utterly foreign to mainstream filmmaking - that it is difficult to arrive at a fair representation of them for the purposes of a review.

But, let me step back and describe the general premise. Rembrandt van Rijn (Martin Freeman) receives a commission from a local Amsterdam militia to paint their group portrait. In the midst of personal turmoil - including the death of his wife Saskia (Eva Birthistle) after the birth of his son Titus - Rembrandt reluctantly completes the painting known as The Night Watch, but not before uncovering a conspiracy among the militia that has resulted in the assassination of one of their members, Piers Hasselburg. The painting is ultimately executed as an investigation of the murder and an indictment of the militiamen themselves. 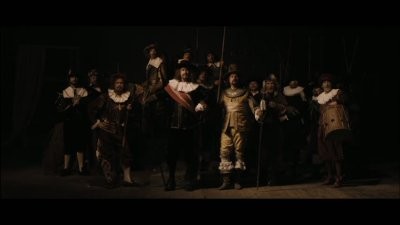 Greenaway has apparently developed this conspiracy theory on his own; it is further explored in the documentary feature Rembrandt's J'Accuse (see The Extras below). The plot of Nightwatching, while many-layered and giving important weight to Rembrandt's relationships with his wife and servants Geertje Dircx (Jodhi May) and Hendrickje Stoffels (Emily Holmes), mainly revolves around the gestation of the painting and Greenaway's many-tentacled conspiracy idea.

However, the conspiracy is not used to generate tension and narrative suspense - it's mainly utilized as a way into Rembrandt's thinking, and part of what makes Nightwatching special is this vigorous engagement with an artist's creative process. The conspiracy makes a viable - and plausible - structure upon which to make assumptions about the why, where, and how questions around The Night Watch (certainly a mysterious painting, comparable to Velazquez' Las Meninas in its elusive strangeness). 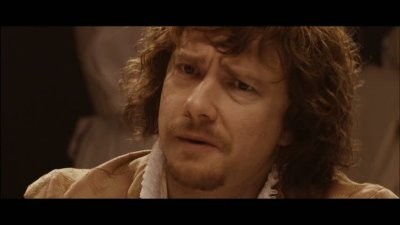 As opposed to a stark psychological portrait of the artist as a troubled soul, Rembrandt is portrayed as a man who enjoys a lusty, fulfilling life, surrounded by people who share in his passions. Freeman's performance is robust and committed, exhibiting talent that goes beyond the impeccable comic timing he displayed on The Office and elsewhere. Greenaway and Freeman's Rembrandt is a man driven by a sense of charity and justice, and is opposed to hypocrisy. A truth-teller and storyteller, Rembrandt avoids romanticizing his subjects and ridicules artists who do. He is even offended by the militia's commission - and one surmises that commissions offend him in principle alone. A requested portrait conflicts with the notion of expression. Why would one paint a subject about whom the artist knows or cares little? I can imagine no challenge greater to an artist than attempting to cultivate empathy for an unknown subject. However, when Rembrandt sniffs out corruption among the militia's members - particularly the abuses of Kemp, whose orphanage doubles as a brothel - the artist snaps to attention and seizes the opportunity to immortalize the notorious squad.

In keeping with the dramatic nature of The Night Watch, Greenaway has adopted a theatrical visual style. The large, spare sets are lit in a way that suggests an elaborate stage production; this was no doubt inspired by Rembrandt's own theatrics - the bright glowing faces peering out of an immense darkness. It is yet another layer of interest in Greenaway's complex vision. Also somewhat play-like are sequences in which characters - usually Rembrandt - speak directly to the camera. Generally, the director allows his film to play out in a leisurely fashion, through graceful camera movements, through scenes of clever dialogue that combine great wit with well-paced exposition, and through somewhat essayistic monologues by characters who analyze the great painting from an art-historical point of view.

Nightwatching is presented in an anamorphic transfer at approximately 2.35:1. The transfer is adequate, but not spectacular. It's unfortunate that a film made so recently has such poor black levels. This flaw in the transfer - light blacks - is especially irritating because Greenaway was clearly attempting to recreate something of Rembrandt's use of light. Like much of the artist's work, The Night Watch features an extremely deep black background. The outstanding photography by Reiner van Brummelen boasts lovely compositions and a carefully-crafted lighting scheme. This transfer, which makes the blacks look quite gray, does not do the film's visuals justice.

5.1 Surround and 2.0 Stereo tracks are provided. The surround track is unusually active, with almost constant ambient effects. The activities of Rembrandt's servants or the weather outside are examples of elements always present on the soundtrack. While there are no aural fireworks here, the enveloping sound design adds another level of engagement to the film. The stirring, moving score by Włodek Pawlik is well worth seeking out on its own, although I cannot determine its availability on CD or otherwise.

On Disc One, the only bonus feature is a set of interviews with Greenaway and his cast, lasting just under one hour. There are many illuminating remarks here, and the interviews make a worthy substitute for behind-the-scenes featurettes.

On Disc Two is Greenaway's indispensible companion film to Nightwatching, an art history documentary essay on The Night Watch called Rembrandt's J'Accuse. This is one of the best documentaries I have seen on a fine arts subject. Over the course of this 100-minute film, Greenaway himself (as both filmmaker and narrator) elucidates his theory that Rembrandt intended The Night Watch to reveal the treachery of Hasselburg's killers by examining 34 "mysteries" associated with the painting. Starting off with the assertion that contemporary society has an "impoverished" visual literacy, Greenaway proceeds to teach viewers to "read" The Night Watch as one would a text. In the course of reviewing the 34 mysteries - each of which comprises some facet of the painting, such as its setting or the individuals represented in it - the director performs an even more generous and valuable service by refreshing the way we look at art. In my experience, museum visitors spend more time reading the text panels adjacent to a painting or artifact than they do looking at the object itself. Greenaway reminds us that there is far more to observe in a work than any text can adequately summarize.

This leads me back to the point I was trying to make in my opening paragraph. Impossible to encapsulate, these two films operate on many levels simultaneously; for that reason and others, I look forward to seeing them again. Taken together, Nightwatching and Rembrandt's J'Accuse represent a singular vision and a deep engagement with the many prisms through which art may be observed. Greenaway's creation is an odd, rare thing. He has pulled apart and reassembled a great work of art - and in doing so, has made another. 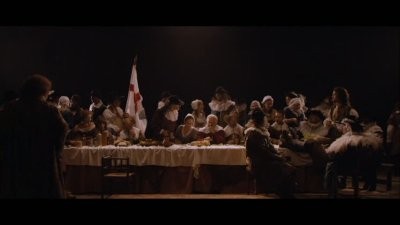 Final Thoughts
Nightwatching is a challenging, multifaceted film, but a highly rewarding one - and one that I suspect will increase in richness with additional viewings. Paired with Rembrandt's J'Accuse, this set makes for truly rigorous intellectual exercise. Highly recommended.