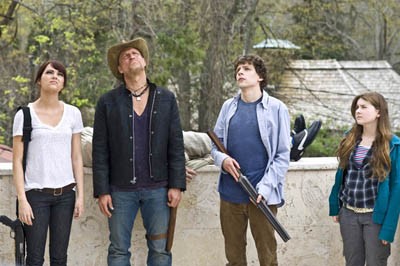 For those of you worried that now that the summer is over, all the fun movies will be gone, worry no more. Zombieland is here to save the day.

Set in a not-so-distant future where mad cow disease has grown into a full-blown zombie apocalypse, Zombieland follows one of the few--and as far as he knows, possibly only--survivors of the epidemic. Columbus (Jesse Eisenberg, Adventureland) is a neurotic, phobia-laden college student whose irrational sense of survival has somehow kept him from being bitten and turned into the cannibalistic undead. He follows a strict list of rules that he is constantly revising, and in voiceover, he introduces us to the most important of those. Aided by some clever onscreen typography, we get a quick crash course in how to keep from being eaten. This is followed by one of the best credits sequences you're ever going to find, rivaling Watchmen for the best credits of the year, and thankfully, unlike Watchmen, managing to follow those up with a good movie. In these first five minutes, director Ruben Fleischer and writers Rhett Weese and Paul Wernick quickly and efficiently set the tone for the entire movie: big laughs and big gore. You will bust a gut seeing zombie guts busted all over the screen.

Columbus is making his way back to his hometown of Columbus, Ohio, to see if his parents somehow made it through the massacre. On the way, he runs into Tallahassee (Woody Harrelson), a badass zombie smasher whose cowboy style couldn't be further from a nervous nebbish like Columbus. It's Tallahassee who insists on going by their destination cities rather than their real names; it discourages them getting too connected, since there is a good chance either could end up dead fairly soon. The pair doesn't even have time to come to terms with their own uncomfortable alliance when they run into two more uninfected humans, a pair of con women they will dub Wichita (Emma Stone, Superbad) and Little Rock (Abigail Breslin, Little Miss Sunshine). After a few mishaps and misunderstandings, the quartet adopts the girls' plan to head out to California and go to Pacific Playland, an amusement park they've heard is zombie free.

As our narrator, Columbus is hilarious and all-too human. Fully admitting to being a nerd, he also admits to being a virgin, and he is easily the least macho of his group. Even the 12-year-old girl has more courage than he does. Columbus quickly develops a crush on Wichita, and it's tough to blame him, she's gorgeous and pretty awesome, I've got a crush on her, too. She also has more trust issues than a failing savings and loan. Trust is a big theme of Zombieland, and it lends the film a good helping of heart to go along with the dark humor and over-the-top violence. All of these folks have lost the human connection due to their enforced isolation. In their fight to stay alive, they have learned to only count on themselves, and it's going to take some effort to let themselves risk losing more. 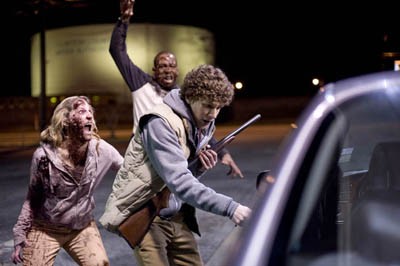 Zombieland is a movie that wants to have it all and is so audacious, it actually succeeds. It's hilarious, tender, cringeworthy, and it even has its fair share of shocks. I jumped multiple times during the movie, and often found myself covering my mouth to simultaneously stifle a guffaw and my gag reflex. The cast is excellent, with the young actors all showing that their talent is only going to continue to mature and that they'll find careers beyond the kiddie and teen flicks that got them started. (Abigail Breslin, please continue to choose such smart movies; don't be a Dakota Fanning!) Zombieland is wholly owned by Woody Harrelson, however. I'd really forgotten how funny Harrelson can be when he's playing the cocky smart ass. He goes after this role with everything he's got, but he never looks like he's trying to be funny, he's perfectly within character and comfortable with the outrageous tone of the picture. Old school Woody fans will also be stoked to see the celebrity cameo that comes midway into the movie. I don't want to give it away, just trust me when I say your jaw will drop. (Also, stick around past the credits, there is an added scene with these two at the very end.)

In addition to all of this, Zombieland has incredible style. Ruben Fleischer has openly acknowledged Shaun of the Dead as an inspiration, and he takes Edgar Wright's dynamic aesthetic and runs with it. The movie was lensed by Michael Bonvillain, who has spent a lot of time shooting J.J. Abrams productions, and he really goes to town here. The camera runs wild and free across the desolate landscape. It enjoys digging through the wreckage and the carnage, and it never shies away from a good shot, no matter how gross. Everything you think these guys won't do, they go for. Plus, the movie is fully integrated. There are no random choices, no gimmicks tossed out once and then never brought up again. Every invented device has a purpose, the movie completely avoids resorting to empty flash.

When I get this effusive about a movie, I often worry about overselling it. I don't want to raise expectations to a level that is so high, the movie can't meet it. This is not going to be a problem with Zombieland. They've already raised the stakes so high on their own, there is no praise I can toss them that they have not already stood to meet. I can't wait to see Zombieland again!