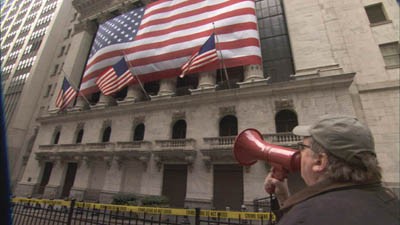 Michael Moore is not a subtle man. The title Capitalism: A Love Story should tell you as much. This new film opens with a joke and then follows that with a sucker punch to the gut, and then from there, the gut punches keep coming with only a few gags and pranks mixed in. Call this technique what you will, but it sure is effective. Despite Moore having a mildly annoying public persona and very little screen presence, Capitalism: A Love Story is another winning piece of ideological propaganda from a cinematic voice that isn't afraid of loudly speaking his mind.

Inspired by America's current economic woes, Moore has decided to focus his cameras on the problem. How did we get here, who is it harming, and who is it benefiting. Coming twenty years after Moore's breakthrough expose on corporate greed, Roger & Me, Capitalism: A Love Story revisits some of the same ground and wonders why, after two decades, it looks even more desolate than ever. He examines abuses that began in the Reagan administration, traces them through Clinton and Bush, and looks at how the big moneymen pushed their way into government and how they have been pillaging America ever since.

Capitalism is less a traditional documentary and more of a cinematic essay. Moore's style is pretty well-established by now: interviews and research are coupled with staged stunts and sardonic stock footage, and we are presented with Michael Moore's personal journey through his particular subject. It's what you've gotten in his previous films, and it's likely what you're going to keep getting, so if you're predisposed to dislike what the man does, you may be predisposed to hate this movie, too. I'd like to encourage you to keep an open mind, however. Honestly, I walked into this movie not expecting to like it and walked away completely won over. The things that annoy a lot of us about Moore are growing less and less his fallback position. As with Sicko, his 2007 treatise on health care, Moore has seemingly taken some of the criticism to heart. Either that, or he realizes that the issues are bigger than his ego, and he needs to relinquish the screen to the matter at hand. Not entirely, but he's getting closer.

Truth is, Moore's comic antics are the worst part of Capitalism. His true gift is not for punking corporate CEOs, but for putting a human face on a problem and finding the most heroic voices amongst the sea of chatter. What makes Capitalism truly powerful and emotionally affecting are the real-life stories Moore tells. From footage of people losing their homes to husbands and wives, mothers and fathers, who lost loved ones only to discover that their employers had taken out life insurance policies to gamble on the mortality of their workers, Moore shows us how the indifference of greed ruins lives. As he sees it, deregulation, the resulting convoluted business practices, and the government bailouts pushed through Congress by Henry Paulson have all been part of a systematic attack on the so-called "free market," making it so it's anything but free. Rather, it comes at a great cost.

It's hard to maintain a scowl and sternly folded arms in the face of such evidence. Abstract schemes on Wall Street result in concrete consequences on Main Street, and the rhetoric of the top 1% is purposely designed to obfuscate that from the rest of us. How else do you explain the current whitewashing of Reaganomics and the smear campaign against FDR, an egregious rewriting of history that Moore takes steps to redress. At first Moore made me sad, and then he made me angry.

Thankfully, Capitalism: A Love Story takes that anger and turns it into hope. The final act of the picture is dedicated to profiling positive change, like the Florida residents who banded together to reclaim foreclosed homes and the Chicago workers who refused to leave their jobs without being paid. It's a rally cry for all Americans who are fed up with the way things are--and polls suggest that's most of us--to do something about it. As a finale, it reveals that for all his goofy bluster, Michael Moore is really one of the most compassionate commentators we have when it comes to exploring American society and the democratic system. Sure, there are a lot of people in positions of power who want to steer the public conversation away from what is just and fair--remember how during the confirmation hearings for Justice Sonja Sotomayor they tried to make it sound like empathy was an outmoded emotion that only sissies and pinkos still clung to?--and it's been easy at times to make Michael Moore sound crazy and disingenuous. I know even I've fallen for it. This is my mea culpa. Giving in to such knee-jerk reactions is letting the wrong guys win, because at the end of the day, they don't want people to talk about how to make life better for the majority. Capitalism: A Love Story starts the debate, and I hope audiences will give it a fair shot so that the work Michael Moore has begun may continue.