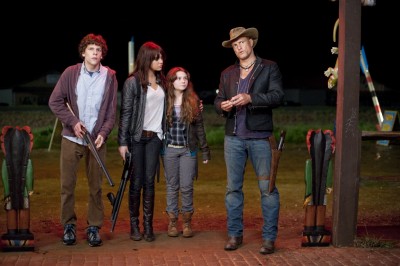 Bloody, quippy, high tech, and pop culture savvy, "Zombieland" is a pre-packaged cult sensation. It's a dizzying geek event righteously lubed up for heated message board debate, ironic t-shirts, and bountiful midnight screenings. Thankfully, the movie has ample cockeyed spirit to back up the exclusionary reaction it will undoubtedly generate. It's a brief, barreling, jaw-cracking action picture, good for a few sizable laughs and some prime examples of splattery zombie-killing business. It's a horror-comedy done proper, taking a far more endearing, freewheeling stance when it comes to busting open the undead, revealing there's still some life left in the densely populated zombie genre.

The world has been wiped out, with zombies scattered around the globe on the hunt for human flesh. Only a few survivors remain, and one of them, Columbus (Jesse Eisenberg), has his own set of rules to help him survive the daily harassment. Meeting up with Tallahassee (Woody Harrelson), a fearless zombie killer of the redneck kind, the two hunters head eastward, desperate to return to whatever is left of their homes. Hindering their progress are Wichita (Emma Stone) and Little Rock (Abigail Breslin), two grifters on their way to visit a beloved theme park in California. At first combative and distrustful, the gang begins to bond, only to find the friendship put to the test when the zombie nation rises up for another round of attacks.

It's pretty much known throughout the geek world that Edgar Wright's 2004, Romero-approved picture, "Shaun of the Dead," was the ultimate word on the strange marriage of zombies and splatter comedy. I don't think the crown is in danger of being stolen here, but "Zombieland" offers its own successful take on the same raw materials, only here director Ruben Fleischer comes well armed with a crisper, more CG-manipulated take on matters of the living dead, boosted by a sociable tone of laughs and shocks that will easily charm the gorehound crowd, but might win over a few naysayers as well. 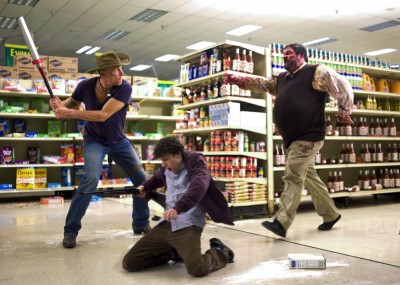 Opening with a brief recap of zombie events and an overview of Columbus's rules for survival (Rule #1: Cardio), "Zombieland" kicks into a combative title sequence where the living dead literally burst through the credits, scored ingeniously to Metallica's bruiser, "For Whom the Bell Tolls." It's made clear in the opening five minutes that Fleischer is reaching for something more visceral than witty, and he's got the visual tools and budget to drag the material into some fierce areas of engagement. His weapon of choice is slow-motion, and it's used superbly to monitor the zombie horror in painstaking detail, as the innocent run for their lives, only to be overcome by flesh eaters who are faster and more determined. "Zombieland" is at least 50% screen detail, offering a frightfully zany zombie apocalypse where every death is decelerated to help relish the pure strains of irony and terror.

Thing do grow very silly very quickly, especially in the second act where the team hits the deserted streets of Beverly Hills to hide out in their pick of abandoned celebrity homes. The playful star cameo included here I cannot reveal, but the sequence represents the best and worst of "Zombieland," taking a considerable amount of time away from the undead to make wink-wink jokes that come off as indulgent. Hilarious, for sure, but the attention is directed away from what counts. It's not a deal breaker, only a lull in the action to give Fleischer a breather to develop his goofy characters -- a transparent move too late in the movie to matter. 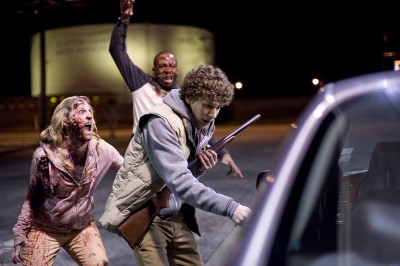 Still, the material is wonderfully interpreted by the cast, with Harrelson having a ball shooting off machine guns, painting Earnhardt numbers on every found automobile, and beating down zombies with a crude range of weapons. Tallahassee's also on the hunt for a Twinkie to soothe his soul, fueling his interstate rage as he finds only Snowballs left behind by cruel Hostess drivers. "Zombieland" also gives something constructive for Eisenberg to do. While still a fantastically one-note actor, Eisenberg puts his neurotic shtick to good use here, narrating the rules and regulations of a world gone mad. Stone and Breslin provide solid backup, but wield shotguns with a threadbare badass panache similar to Don Knotts.

The finale of "Zombieland" takes the action to a theme park setting, and Fleischer isn't afraid to abuse the neon-lit carnival iconography to backdrop the mounting, snarling body count. It's a terrific closer on an unexpectedly inspired film. Perhaps losing the box office clout to all things vampire these days, zombies retain a distinctive screen presence, and "Zombieland" knows just how to treat the plague: roughly and uproariously.