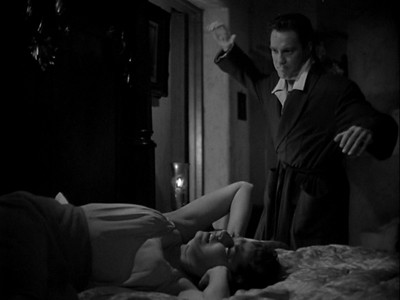 You know a film that opens on death row at the final hour before an execution means business. Lucky for Richard Trevelyan (Richard Todd, The Story of Robin Hood and His Merrie Men), Lightning Strikes Twice isn't the story of his death, but how he possibly gets away with murder. Last minute string-pulling at the tops gets Richard a new trial before he has to take that walk to the gallows, and as the next scene quickly informs us, that trial ends with a split jury. One woman held out for an acquittal and got five others to go with her. It's a strange thing to have happen, but in this narrative world, women are always doing one odd thing or another (or so various characters keep telling us). Usually, it's falling in love with the wrong man.

Take, for instance, Shelley Carnes (Ruth Roman, Strangers on a Train), an actress on her way to the countryside to get some rest. She's been touring as Desdemona in Othello and, ironically, has grown weary of her nightly strangling. She's a little out of the loop when it comes to the whole Richard Trevelyan thing, and so Shelley doesn't realize that she's heading to the town Richard hails from. She stops at a hotel where the nosy owner, Myra Nolan (Kathryn Givney), ends up loaning her a car to get to where she is going, but who Shelley will find out has other motives. Naturally the thunderstorm that strikes that night runs her off the road right by the house where Richard has been hiding since he gained his freedom. He tells her that Myra likely sent her this way to spy for her, as she's been trying to find Richard. Likewise, the next day when Shelley gets to the ranch and finds it closed, the girl who runs the place, Liza (Mercedes McCambridge, Johnny Guitar), knows for a fact that Myra was aware that they were shut down and was looking for an excuse to check up on her and her lame brother, String (Darryl Hickman). Liza also wonders what happened to Richard, especially since she was the woman who sent his trial off course, making herself a local pariah in the process. Clearly, there is more to this whole plot than Shelley has realized, but she's already given her promise to Richard to keep his secret. No surprise. He did that thing that women in movies love: he treated her rotten first, and only then was nice to her. That's the way to make her yours, buddy! 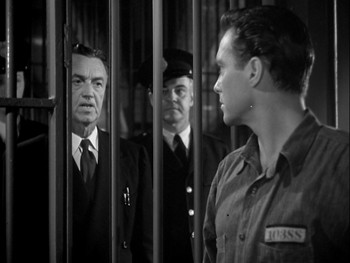 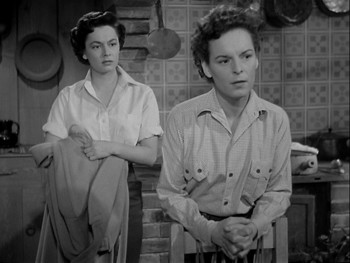 I kind of hate the concept of "camp," but I guess if any movie does fall into that category, it's Lightning Strikes Twice. Directed by King Vidor (Duel in the Sun) and written by Lenore J. Coffee (End of the Affair), the same team that made Beyond the Forest, this 1951 melodrama is anything but mellow. This is the kind of movie where Richard talking and being suspicious is accompanied by the clap of thunder and flash of lightning--and then it comes a second time just in case we weren't clear on the title. The characters are drawn in broad, obvious strokes, and no cliché is left unturned in the script. On their first night alone, for instance, Richard raises his arms and screws up his face like a demented monster to jump on the bed where Ruth is lying...only so he can chase away a spider. Hell, just the fact that Liza's little brother has a limp should give you an indication of what we're dealing with. The kid is caught between his sister's getting Richard acquitted and the local priest (Rhys Williams) whose original testimony got him convicted. They can't both be right, and of course it's going to take a big city gal like Shelley to come to this dusty town and figure out the truth.

So, yes, it's predictable and more than a little silly, but it's also deadly serious in execution, and that ends up making it rather good fun. With Max Steiner's bombastic music and King Vidor's marvelous command of his mis-en-scene and masterful combination of real locations and studio sets, Lightning Strikes Twice demands you pay attention to it, originality be damned. In some cases, good acting be damned as well. Richard Todd is a real stuffed shirt, and Ruth Roman isn't all that much looser. The movie ends up being ruled by its supporting players. Kathryn Givney's intense scheming actually made me wish her character was more evil, and when Zachary Scott (Let's Make it Legal) shows up 2/3 in as a devilish playboy, he really livens things up. Mercedes McCambridge is the real standout, though. Her brittle portrayal of the jilted Liza tells us from the get-go that there is something not quite right about this girl, and the further she gets into the movie, the more anxious and deranged she becomes.

King Vidor was a master of fevered emotions, and his flair is what ends up elevating Lightning Strikes Twice over what otherwise might be a merely serviceable and wholly forgettable melodrama. As it stands, it's not the greatest movie in the world, nor the most accomplished entry in the director's filmography, but it makes for a fairly good evening of entertainment. It could have used a little more of Vidor's trademark insanity, a little less bubbling under the surface and a little more boiling over, but it is what it is. Fans of old movies likely know what kind of film this is and don't mind seeing a B-reeler every once in a while. If you're looking for something sort of like a potboiler and a little on this side of a "woman's picture," Lightning Strikes Twice should fit the bill. 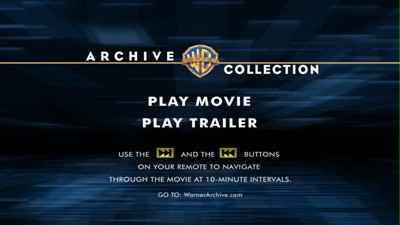 Video/Packaging:
Lightning Strikes Twice is part of the Warner Bros. Archive Collection, a direct-to-order line set up by the studio to release some of their back catalogue in a no-frills package to collectors. It's an interesting program, where film fans pay a premium full-retail price to get a movie they can't otherwise get; the downside is that there is some skimping to keep costs down, which may strike some as backwards since the consumer price is up. This skimping includes recording the movie on a blue-backed DVD and printing the cover on cheap stock and what looks like a standard color printer no different than most of us have at home. There is also an on-demand download option, slightly cheaper. If you don't care about the aesthetics as much as getting the movie, then this may not bother you; it doesn't me, I purchased Green Mansions about a month ago. The set-up on all the discs is a functional "play the movie/play the trailer" menu and that's it.

The video transfer is also something that isn't given much attention. These aren't big restoration jobs, something more like the Criterion Eclipse series, where the movies are put on DVD in the cleanest form likely available. Lightning Strikes Twice looks like a pretty good print, something like what they might have used in syndication or on Turner Classic Movies. The base picture is fairly crisp, but the surface image has a lot of spots and flickers and the occasional scratch. A couple of times a particular shot is also kind of fuzzy, such as a five-second cut to Ruth Roman sitting by the fire when she first visits with Richard Todd; there is an immediately noticeable difference, like a bad insert in an otherwise decent movie.

The picture is in black-and-white at a full frame, 1.33:1 aspect ratio.

Sound:
The mono mix is actually pretty good. It's a little tinny at times, but I didn't notice any hiss or extraneous noises, nor were there any dropouts.

There are no subtitles

FINAL THOUGHTS:
Lightning Strikes Twice is worth a Rent It for its entertainment value. Though it's not King Vidor's best movie and certainly not the best DVD package you're likely to find, this 1951 melodrama is an enjoyable old flick, full of sweeping emotions and orchestral swells to match its operatic weather. It also features an excellent performance by Mercedes McCambridge. I almost graded this as "Recommended," but I'm just a little reluctant to suggest you pay the full price for this if you've never seen it before and don't know what you're getting. The Warner Bros. Archive Series seems set up to sell to the converted, anyway, and the retail price isn't conducive to a blind buy. So, caveat emptor. 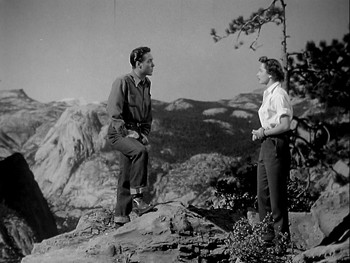 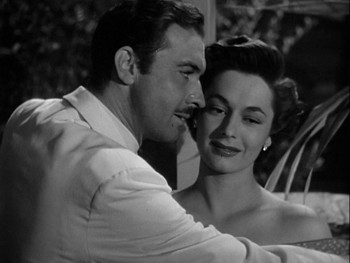