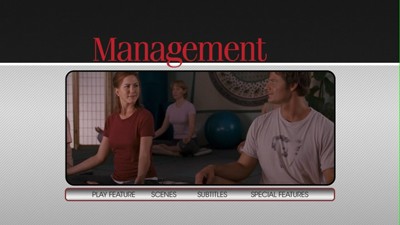 While I am sure there are plenty of real-life relationships that have kicked off under creepier circumstances than the one in Management, this romantic comedy's basic premise is still a slimy thing to have to try to swallow. When Sue (Jennifer Aniston) checks into an Arizona hotel, buttoned up in her stylish business suit and exuding an aura of cool disdain, her butt attracts the immediate attention of Mike (Steve Zahn), the son of the owners and the defacto "night manager." Once mom and dad head off home and leave junior in charge, he goes up to Sue's room with a complimentary bottle of wine. He tells her this is the normal routine at the Kingman Motor Inn, but we know otherwise, we've seen him dig the vino out of the lost and found. Sue declines Mike's suggestion that she offer him a glass, but not one to take a hint, Mike returns the next evening with the second night bottle of champagne. Once the cork is popped, Sue puts a pin in the balloon of Mike's erotic delusion and lets him touch her admittedly very nice behind in exchange for Mike going away. Miscalculation One: touching an ass cheek makes Mike fall in love.

Miscalculation Two comes the next morning when Sue impulsively decides to mount Mike in the laundry room before leaving. If a little booty grab is enough to make Mike go all twitterpated, then actual sex is pretty much a marriage bond. Unable to get Sue out of his mind, Mike puts all his cash into a one-way ticket to Maryland to pursue his obsessive, stalker heart. Except it's meant to be cute, and then it's romantic when he chases her again across the country to Washington, where he lives in the basement of a Chinese restaurant and serenades her outside the home where she lives with her fiancé (Woody Harrelson). Song of choice is Bad Company's "Feel Like Making Love." As "I am going to pretend I feel something more than wanting to get in your pants" songs go, it's maybe not the most obvious, but don't pay attention to the lyrics, it's the gesture that counts.

I have intentionally described the plot of Management in somewhat exaggerated terms because this basic nugget of an idea is the biggest hurdle this movie has to get around. The directing debut of writer Stephen Belber (Tape, The Laramie Project), Management is a jumble of real emotions and obvious contrivances. It's a bit perplexing and somewhat maddening, and for every two scenes that made me want to come around and like the picture, Belber threw in a third that made me think he had no idea what he was doing.

When was the flashpoint where modern scribes decided that character should be a bundle of quirks and neuroses rather than real people? If we can figure that out, I'd like to know. Patton Oswalt has a routine about how if he had a time machine, he'd go back in time to stop George Lucas from making the Star Wars prequels; if it were me, I'd go back and do something criminal to whoever dreamt up this writing conceit. Both Mike and Sue can be boiled down to their particular problems: he is an emotionally stunted weirdo, she is a woman who demands that everyone recycle but has no time for true feelings (it's all about plastic, not people). Belber stops short of giving us any more character insight than that. Sure, both of these folks develop over the movie, but their changes are as one-note as their introductions. Mike stops acting like a clingy infant (kind of), and Sue stops distancing herself from real connections with others (kind of). I mean, Mike still chases her across the country on a whim for a third time, and he makes her transition easy by giving her a place to continue to pursue her causes, but fine, close enough. 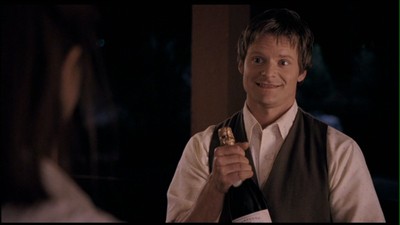 Management isn't a terrible movie. In fact, at times, it's quite good. When Belber gets real and let's his creations be actual human beings, it really clicks. Steve Zahn and Jennifer Aniston are quite good together, and Mike's parents, played by Margaret Martindale and Fred Ward, are fantastic in their supporting roles. Midway through the movie, the family goes through an important life change that has a lot of resonance and there is a real tenderness in how this is handled. There is also one stunning scene about half an hour in, coming at the tail end of Mike's first ill-fated trek to Maryland, that proves all involved actually have more going on then the rest of the movie might suggest. Saying good-bye, the loneliness these two people feel is visible on their faces. Aniston in particular really knows how to turn on the sad eyes, and it's heartbreaking. Stop the movie there and you have a short film about how two strange people nearly found each other but missed the mark.

Unfortunately, it's not long after that where Management abandons most of its common sense. Woody Harrelson's character is an overblown caricature only outpaced by the friend (James Leo) Mike makes in Washington, a goofy Asian straight out of the stock best pal bin. It's this guy that encourages Mike to skydive into Sue's pool, plays percussion for his midnight performance, and stands in the bushes with him to spy on Sue with binoculars. I guess if you're going to have a romantic lead who is a creep, you need another guy who is even worse to make the main creep not seem so creepy. Also, for all the emotionally honest scenes that make Management endearing, the big shifts come via easy speeches. Mike goes from being so socially inept that his opening pick-up line is to tell a woman she has a nice derriere to a sage of psychological wisdom--and that's even before he joins the Buddhist monastery.

Listen, I know it's tough to get money to make a movie, and if pitching Management as some kind of high-concept stalker romance got Belber the financing he was looking for, then I guess more power to him. What he really needed, though, was someone to tell him to not be a slave to that concept and, even better, not to feel he had to pander by throwing in a zany screwball Steve Zahn scene here and there. A good script polish could have really turned Management into something. A strong editorial eye could have spotted the inconsistencies in tone and gotten a more authentic movie out of what Belber was working with. Unfortunately, that didn't happen and instead Management comes off as even more schizo than the hero it wants us to fall in love with.

Video:
I didn't see Management during its theatrical run, but I was kind of surprised how cold the film looks. It's like the whole thing was shot in Seattle and none of it took place in Arizona. Not sure if this is an issue with the cinematography, but the 1.85:1 anamorphic transfer is problematic, so who knows? Maybe the colors are a little too dialed down. The resolution is definitely soft at times, and there is also some interlacing. It's an average looking disc, I suppose, maybe slightly under.

Sound:
A 5.1 surround mix of the audio is of good quality, though nothing to get overly excited about. Then again, this isn't exactly the kind of movie that needs a wild man at the mixing board. It's mostly dialogue. There is a little interplay between the speakers, but it's mostly right down the middle.

Extras:
This is pretty much a DVD-by-numbers in terms of bonus features. We get the original theatrical trailer, as well as a 15-minute collection of 9 deleted scenes (including stuff with a character played by Josh Lucas that was dropped from the movie) and a near-13-minute gag reel. There are some funny flubs, but a little goes a long way.

The audio commentary puts together Steve Zahn and the captain of this ship, Stephen Belber. The pair clearly get on and their rapport keeps the track lively, though it's not overly interesting. You get a little peek into the process of making this movie, but not an extensive or insightful one.

FINAL THOUGHTS:
Management is not the most cohesive cinematic experience you're going to have this year. Sometimes it's hard to tell who is making worse choices, the characters in the film or the director guiding them. When the movie veers off course, it's due either to its strange stalker rom-com premise or out-of-place attempts at slapstick; when it comes back, it's because writer/director Stephen Belber gets real with the material and his actors manage to find the heart the rest of the film lacks. Jennifer Aniston is very good in this, and Steve Zahn does his best to meet her, and for them, I say Rent It. 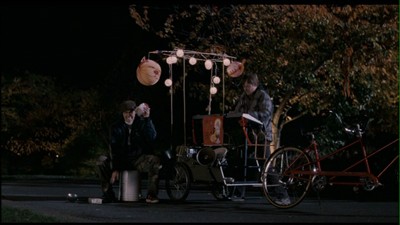