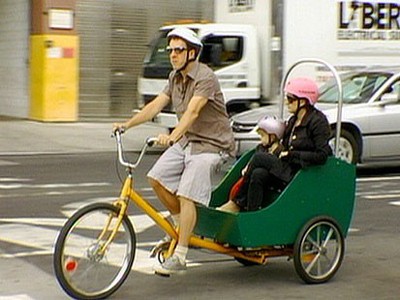 Documentaries about what we eat and how we interact with our environment are becoming their own cottage industry, one I'm sure some people are already getting sick of. (I think I've had my fill of the story of high-fructose corn syrup, for instance.) That said, there are still films coming out that have an individual story that we haven't seen before, so it's not a genre that is entirely played out as of yet. The latest is No Impact Man, the document of a yearlong project undertaken by a single New York family. This is a chronicle on film to go alongside the blog and the book. There is also a fictional film registered on IMDB under the same title. If it's an adaptation/dramatization, I can already tell you it's going to be terrible. See this version now and don't worry about it later.

The titular No Impact Man is Colin Beavan, a writer in his early 40s who, after writing a couple of history books, decided he wanted to write something that made more of an immediate...well, impact. The film, which is directed by Laura Gabbert (Sunset Story) and Justin Schein (cinematographer and director on MTV's "True Life"), joins Colin as he begins the 12-month journey. Accompanying him are his wife, Michelle Conlin, and their daughter, Isabella. The goal is to see how much wasteful behavior they can remove from their lives and how many solutions they can come up with to replace those things with something more sustainable. Most of the media reports we see in the film focus on their not using toilet paper, but there's so much more than that. For instance, halfway in, when they cut off all their electricity, how can they manage to keep food without refrigeration and how can Colin still power his computer? These are hurdles they are going to tackle, and not all of them are going to work.

Some of the decisions seem extreme. Buying food that only comes from within a 250-mile radius and not in disposable containers is not impossible, but what about using no transportation that isn't powered by human muscles? Does that really have to include their elevator? Colin believes that yes, it does, even though that's not what he's advocating for every individual. Rather, his plan is for him to go a little crazy in order to understand what really matters. It would be one thing to pick and choose--Michelle would keep her coffee, for instance, if anyone grew coffee beans in New York--but that means the sacrifice is weighed ahead of time. Colin's clan will get rid of it all and at the end of the year will see what no-impact decisions had the most impact on them.

Colin Beavan is not a loony, nor does he spend a lot of time in No Impact Man proselytizing. Yes, you might find him a little annoying at first. Some early detractors complain that it's easy for someone of his means to make a change, the level of survival is not as imperative as someone with less income--he presumably has a book deal and publicist, Michelle is a writer at Business Week, contradictions that are openly acknowledged. I admit I felt the same way at the start. As the movie wore on, though, I warmed to Colin's quiet devotion to his convictions. He may be dogmatic with his family about staying on track, but he is not in how he engages his audience. (He may be in his writing, we don't get much sample of that; we do get a lot of his reaction to the reactions to his writing, and boy, he cares a lot about what people on the internet have to say.) 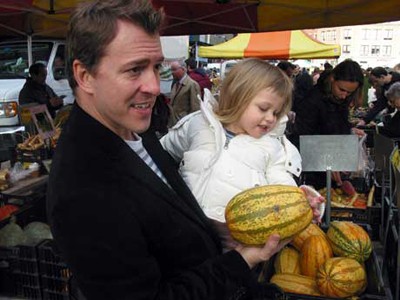 No Impact Man actually ends up being a documentary that is more about the family than it is environmental philosophy. It's like they say on the opening of "The Real World," this is what happens when people stop being polite and start getting real. Michelle, an admitted reality TV junkie, would probably appreciate the comparison, and it's her that emerges in No Impact Man as the more fascinating personality. Sure, Colin has his moments of doubt, but the life change is far less drastic for him, he's the one with the end goal. Michelle was the one who was more materialistic, more out in the world, and the one who is being taken along for a ride that she is not sure she should really go on. Her greater wants and desires--specifically, her wish to have another baby--become important parts of this journey as she feels Colin's dreams are overtaking hers. At the same time, she is the one who is being converted to a new way of life and arguably the one who has most considered the outcome. It's fitting that the movie ends with her laying out what parts of the experiment they will keep and what parts of modern convenience she wants back.

Ultimately, Colin's point isn't that Michelle's beloved conveniences are bad, it's that our methods of getting them aren't always the best for our continued living. There are better ways to get our energy, better ways to package our products, better ways to buy our food that helps each community thrive. He doesn't at all advocate that people go to the extremes he did, but he hopes we'll all benefit from the questions he asked.

Gabbert and Schein's film is old school documentary filmmaking. No Impact Man just reports what happens, and excepting Colin's visits to nearby farms as part of the process of knowing his food, no side trips into history lessons or graphs and charts. Sure, you're going to come away from this thinking about what is going on in our world, but because the focus is the story and not teaching, it's kept at a level we can all interact with individually. Which is what No Impact Man really wants, many revolutions of one forming a movement of many and ultimately change for all. Granted, I doubt No Impact Man is really going to inspire that much fervor, since despite it's quality, it doesn't have the fervor itself, but hey, even a quiet start is a start.