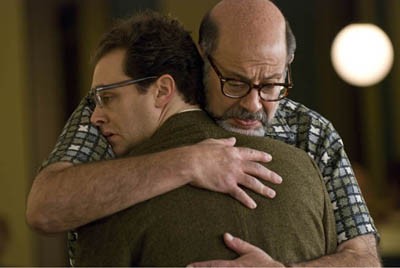 Yes, I've seen the new Coen Bros. movie, A Serious Man, and no, I don't know what it means. I don't care, either. I still loved it!

Longtime Coen fans know that their movies are often mysterious, unclassifiable things, particularly on the first viewing. I know The Big Lebowski took some time to sink in, at least for me, and the UFO stuff in The Man Who Wasn't There totally threw me for a loop. So, too, is A Serious Man likely to cause a bunch of head scratching even as it receives accolades. It's a strange spider-web of philosophy and mysticism, a clash of existential malaise and religious tradition. So many elements are significant to the whole of the picture, while the whole point may be that everything is insignificant, and knowing what little details are important may take multiple screenings. Which, if all the wear and tear that my DVDs of Lebowski and Burn After Reading have been subjected to is anything to go by, can only be a good thing.

Set in the 1960s, A Serious Man is the story of Larry Gopnik (Michael Stuhlbarg), a physics professor at a small college. Early in the picture, Larry is confronted by a Korean exchange student (David Kang) who thinks it's unfair that he was expected to know so much math when he understands all the rest, including the story of Schrödinger's "dead cat." Larry replies that no one really understands the dead cat, not even him, it's the math that counts. This is the kind of guy that Larry is. Math is reliable, abstract concepts are not, so stick with the math.

Too bad for Larry that A Serious Man is one of those movies that is going to take its main character and pull the rug out from under him. Then, once the rug is gone, it's going to pile on as much crap as possible to make sure he knows how hard the floor is without the rug to cushion his fall. (That rug tied his life together as much as it did the room.) That same Korean student first tries to bribe Larry and then threatens to sue him. His wife (Sari Lennick) announces that she is leaving him for the touchy-feely widower Sy Ableman (Fred Melamed, who is the perfect candidate to play the lead in a Francis Ford Coppola biopic), and this only a week before their pot-smoking son's bar mitzvah and the evaluation of Larry's candidacy for tenure, the latter of which is not being helped by anonymous letters besmirching Larry's character. One neighbor (Peter Breitmayer), a scary hunter-type with a crew cut, is encroaching on the property line, another (Amy Landecker) sunbathes nude, making it so that Larry has something he wants to push away on one side and something he'd like to see come closer on the other. The dichotomy of life! Larry's brother Arthur (the remarkable Richard Kind) is also staying with the family, monopolizing the bathroom to drain the cyst on the back of his neck and filling a notebook with strange mathematical scribblings that promise the solution to the universe. But what question is the universe posing? That's the true mystery. 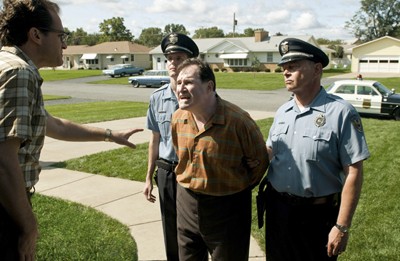 The Coens are juggling a lot of different themes in this. Tradition plays a large role in Jewish society, and the film opens with a portentous parable from the past. Likewise, everyone encourages Larry to talk to the rabbis at his temple, each of whom represents a different age and level of wisdom, just as Larry and his son Danny (Aaron Wolf) represent two sides of a generation gap. The deer-killing neighbor takes his son hunting with him, and the two of them play catch in the backyard, the older passing on certain rituals to the younger. All Danny wants from Larry is a clear television signal so he can watch "F-Troop." Is Larry's real problem that he is disconnected from his faith? Or is it a failure to act? His defense for a lot of things is, "But I didn't do anything." Perhaps a serious man is one who does. (Ironically, Danny and the aging Rabbi Marshak, played by Alan Mandell, have more of a connection than the boy and his father, thus completing the loop.)

A Serious Man is comedy with black tints. Joel and Ethan Coen have perfected the art of quirkiness without contrivance. In their movies, they have built their own bizarre universe, one frame at a time, and it's a realm that is governed via chance and indifference to the well-being of its populace. The characters that are subject to the whims of this pocket dimension are charged with finding their way through it. Michael Stuhlbarg is a character actor making the most of the lead role that has been handed to him. Larry is meek, whiny, and confused, and yet played sympathetically. He's a moral and steadfast man who is caught up in a conspiracy to undermine both of those qualities. I liked Larry, I didn't want him to falter, but yet, I wanted him to get out of this mess and would understand if he caved in.

As with another recent movie, Steven Soderbergh's The Informant!, I feel the more I describe A Serious Man at this stage, the more I take away from the individual viewing experience each of you reading this might have. I will say, however, that my early theory on the key to understanding this movie is threefold: the seemingly pointless story told by the Rabbi Nachtner (George Wyner), the dream where Larry demonstrates the equation of the unknowable, and the dream where he aids his brother in escaping his problems. Stories often have no point, there are some things we just don't know, and in the face of that, all we can do is help each other get along.

Or maybe not. Maybe it's just that whatever higher power is out there is sick of our shenanigans and the erosion of our moral character and will smite us from the Earth. Which, really, doesn't necessarily disprove my other theory either. The Coens evoke Jewish parables in their opening sequence, and A Serious Man is a new Jewish parable they've made themselves. It's also a bit of a zen koan, the kind of thing you don't understand right away, but that you ponder and let its absurdity meet you halfway. In either case, you eventually will hold a finger to the air and say, "Ah, I understand." Be your own Rabbi Marshak and busy yourself with the thinking.