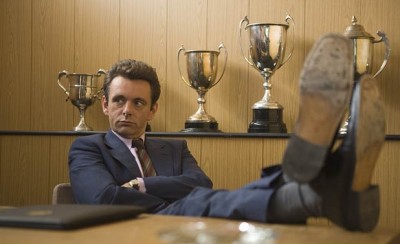 One doesn't have to be a slavish follower of English football to appreciate the nuances of "The Damned United." More of an intimate drama than a sports film, director Tom Hooper has made sure the exclusionary details have been softened, allowing audiences near and far a shot at comprehending and enjoying this terrific film. As an evocative depiction of football industry mechanics, it's one of the best features on the subject in a long time.

As the outspoken manager of Derby County during the early 1970s, Brian Clough (Michael Sheen) brought the team from worst to first, using his bravado, commitment, and gentlemanly conduct to turn the club into champions. Fueling his insatiable need to win is a rivalry with the top team in England, Leeds United, and their manager, Don Revie (Colm Meaney), who long ago slighted Clough, pushing the Derby man to seek out some form of revenge. In 1974, Revie decided to move onto another team, leaving Clough an open spot to coach the enemy. Alienating his best friend and co-manager, Peter Taylor (a magnificent Timothy Spall), Clough took over the Leeds club with his traditional mix of ego and control, immediatley rebuffed by the players. Stuck in an impossible situation of disgrace, Clough retraces the steps to his current woe, finding his misdeeds in the media have affected his reputation and ability to properly manage.

As a football celebrity, Brian Clough was a legend. A charismatic man with a penchant for theatrical declarations of success, Clough enjoyed a career filled with incredible turns of fate and awe-inspiring victories. His life story is ripe for a big screen documentation, leaving screenwriter Peter Morgan ("The Queen") plenty of neuroses and startling gamesmanship to plunder, molding a vivid glimpse into Clough's history (though the film is adapted from a semi-fictional book). Director Hopper eagerly takes the lead, depicting Clough's bumpy ride to glory in stark English elements, with icy winds and steady rain creating a force field of gloom to further isolate Clough from his supporters and superiors (Jim Broadbent appears as the Derby chairman).

It's striking cinematographic work here from Ben Smithard, with restrained, cautious framing that best extracts the needed psychological divide of the characters, while also honing in on harrowing moments of disaster as Clough's slippery tongue gets the best of him, with claustrophobic, smoky rooms of anxious old men ready to punish his bluster. The picture looks amazing, helping Morgan and Hopper convey necessary shades of discontent that drove Clough to the brink of failure.

There's a host of football sequences to enjoy, many of them the muddy, violent type to underscore the underhanded tactics Revie employed as manager of Leeds, but "Damned" isn't a sports movie in the traditional sense. More of a character study, the picture relies heavily on the skill of the actors to infuse it with the proper sense of life. Sheen as Clough is a remarkable achievement of character vulnerability, as the actor creates a stirring depiction of a man driven to greatness by his own bitterness, only to realize the severity of his actions after everything was stripped away. Sheen is winks, wit, and weathered as Clough, with a quivering interior of doubt the camera absolutely eats up. It's bravura work from this gifted actor, permitting the viewer time to see beyond the flair and inspect the fragility of Clough, who wanted to destroy Revie, but fumbled the majority of his opportunities due to his blind hatred.

Because "The Damned United" prefers human and industry conflict over playing field disputes, it makes the film an accessible and spellbinding showcase for tightly-suited antagonism and venomous verbal spray. This is a first-rate drama, marvelously acted and crafted. It doesn't require a doctorate in English football to enjoy, only a viewer with an interest in incredible stories of larger-than-life personalities.