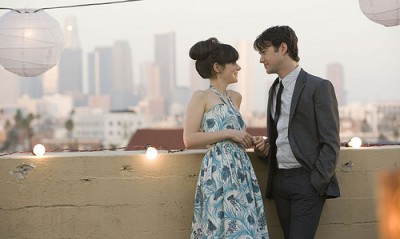 (500) Days of Summer shares some features of the recent spate of precocious, indie-rock romantic comedies. It's got self-absorbed leads, a hand-crafted visual style, and shoe-gazing bands on the soundtrack. But for all that, the movie succeeds, because in the end, it's a rare romantic comedy that cares about its characters and tries to make some sense of what they are going through. To its eternal credit, (500) Days of Summer forgoes predictability and the kind of ending we all expect from this genre, opting instead for a more honest, realistic, and edifying outcome. How often do romantic comedies come along that a) don't end with the leads in each other's arms and b) treat both leads' perspectives with equal care?

The story is non-linear; each scene opens with a number in parentheses (as in the title), indicating which day of the leads' relationship we are about to see. Tom (Joseph Gordon-Levitt) works for a Los Angeles greeting card company; an aspiring architect, Tom is not satisfied with the detour his career has taken. A new hire, Summer (Zooey Deschanel), catches Tom's eye and he immediately falls for her. Althought Summer warns Tom from the start that she's not looking for anything "serious," the two grow closer. Of course, Tom is far more invested in the relationship, and he lies to Summer about being okay with her more aloof attitude. Summer eventually pulls away from Tom, leaving him devastated. Later, Tom meets Summer on the way to a mutual friend's wedding; they re-connect there, and Tom believes that their relationship is on the verge of a rebirth. Summer invites him to a party at her apartment, and Tom goes full of anticipation - but meets disappointment all over again. Tom is driven to focus on architecture - he studies and compiles a portfolio and applies for jobs. In the middle of this, Tom finds Summer at his favorite spot in the park. They talk and Tom starts to understand what really passed between he and Summer.

Although the screenplay by Scott Neustadter and Michael H. Weber does incorporate romantic comedy clichés - goofball friends, silly behavior in public places, the heartbreak "crisis" scenes - they eventually wind up in the background of the action, while the substance of the film maintains a close and thoughtful focus on the two lead characters. Tom is likeable but naïve, and we know he's in for a rough time from the outset. Summer is a bit harder to pin down, yet her experience is as familiar as Tom's; at first, she seems to be a little selfish, but as the film progresses her position grows increasingly empathetic. The performances help immensely. Gordon-Levitt and Deschanel are both excellent, investing their characters with credible youthful confusion. Each character grows and changes throughout the course of the narrative, and those changes, while subtle, are evident in the performances.

The direction by Marc Webb is inventive and dynamic, without being overly busy. A well-staged musical number represents Tom's mood after spending his first night with Summer. When Tom attends Summer's party near the end of the film, one side of the frame shows how Tom imagines the party, and the other shows how the party actually plays out. These touches - and many others - show a level of visual engagement not typical for the genre, and above average for any film.

What ultimately separates the movie from the chaff of the romcom genre and what will make it last is the difficult, crumbly development of Tom and Summer's relationship. It's not meant to last, and it doesn't. The fact that a movie intended as a charming comedy takes on such subject matter is noteworthy; the fact that it's largely successful is surprising. Tom eventually realizes that his romantic attitude is justified, despite his heartbreak; and Summer knows it, too, even though she started out sour on the idea of love. The fact that the two of them, in particular, weren't meant for each other is ultimately liberating - an experience that is as universal as it is rare in movie romances.

The Video
The enhanced 2.40:1 transfer looks terrific. The areas on the screener that looked pixilated and over-sharp are flawlessly rendered here. The eclectic cinematography by Eric Steelberg suits the feature's fragmented narrative and emotional turmoil; Steelberg utilizes a variety of approaches including broadly cinematic moving crane shots and raw, tight handheld technique. The color palette is largely made up of drab earth tones, although light and color are used to brighten up the more upbeat sequences. The transfer duplicates all of this will excellent fidelity. There is a depth to the image that sets it apart from the average over-lit romantic comedy.

The Audio
The 5.1 Dolby Digital surround track makes good, appropriate use of ambient surrounds. Although the sound design doesn't go anywhere new or unusual, it's well-mixed, with dialogue forward. When the track does open up a bit, it's mainly to highlight particular music selections.

The Extras
This screener contains a commentary track featuring director Webb, writers Michael Weber and Scott Neustadter, and Joseph Gordon-Levitt, and fourteen minutes of deleted scenes. Not much here, but the commentary is lively and informative.

(500) Days of Summer is without a doubt one of the more thoughtful and memorable romantic comedies I've seen in quite awhile. The film is anchored by a deep concern for the experiences of its two leads, and Webb's inventive direction keeps things visually interesting throughout. A stronger selection of bonus content would have been nice, but this is still a must-see. Highly recommended.