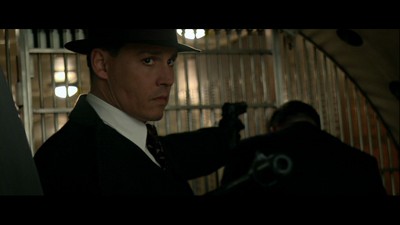 It cracks me up that the MPAA has a category in their ratings system for "Gangster Violence." I suppose it speaks to something in the American character that we consider this to be a special kind of violence. For most, it's probably an enticement more than a warning. Is there also "Gangsta Violence"?

Harlan Ellison once wrote about how you have to be a special kind of stupid to actually need cooking directions on a can of soup, but in our state-the-obvious world, some people may not be sure if Public Enemies, a film about the bank-robbing exploits of John Dillinger, has "Gangster Violence." Yes, it most certainly does. The box doesn't lie. I'm disheartened to report, however, that this is not as exciting as it may sound.

Public Enemies stars Johnny Depp as John Dillinger, Marion Cotillard as Dillinger's best girl Billie Frechette, and Christian Bale as FBI agent Melvin Purvis. It also has a bit part with Billy Crudup as J. Edgar Hoover, and a blink-and-you-won't-be-sure-it's-her appearance by An Education's Carey Mulligan, Channing Tatum as Pretty Boy Floyd, and the former girl-most-likely-to Leelee Sobieski. It was co-written and directed by Michael Mann, the creator of Miami Vice and one of the more fetishized directors in Hollywood. His movies make the ugly underside of crime look pretty. Pretty and dull. The cruel joke of life. Evolution says you can look good, but you can't also have a good personality, it wouldn't be fair. I mean, seriously, who actually rewatches films like Collateral and the big-screen Miami Vice? Or Public Enemies, for that matter?

The film follows Dillinger over the course of his legendary crime spree, beginning with a tense jailbreak and tracing the ups and downs of his many bank heists, including another brief incarceration, loads of dead bodies, press baiting, and falling for the lovely Billie. (Can't blame him. It doesn't matter how bad the movie, I still always fall in love with Marion Cotillard, too.) Running alongside this and trying to keep up is the still-new FBI. Looking for more funding and respect, J. Edgar Hoover puts one of his best soldiers, the man who shot Pretty Boy Floyd, in charge of the Chicago office in order to bring the folk hero down. Melvin Purvis is an uptight do-gooder with a lot on his shoulders that needs proving, a promoter of new scientific investigative techniques. Meanwhile, Frank Nitti (Bill Camp) is filling in the gap left by Al Capone and organizing crime, making rogues like Dillinger an endangered species. 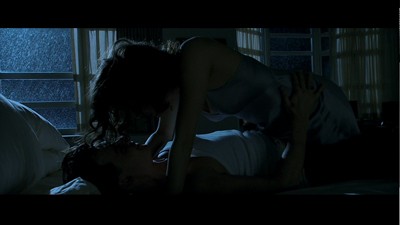 Trouble is, the movie has about as much excitement as my paragraph describing it. For all the gunplay and its solitary scene of blue-light sex (Mann loves his blue lights), Public Enemies is a real stuffed shirt of a movie. It has the look and the swagger of a rock star, but it takes itself as seriously as a classical composer. You'd almost think it's a message picture for as dour as it is. It's like Hoover is whispering in Mann's ear, "Make sure no one laughs or has their pulse race, and end it with a big stamp that says 'Crime Does Not Pay.'" Except that the portrayal of Hoover is the closest we get to a joke in the whole picture. The way Crudup walks around all straight-backed and stiff-limbed, I'm pretty sure J. Edgar's ladies panties are riding up on him.

But, boy, does Public Enemies look pretty. It's like gangster porn. Everything is silicone and make-up, lit to look perfect and show every gynecological detail, but don't make eye contact with the doped-up actress, because you'll realize that you don't feel a thing. My colleague Jason Bailey, who actually liked this movie (well, everyone has their faults), spends the whole intro of his Blu-Ray review examining how the work of Mann and director of photography Dante Spinotti has been so thoroughly dissected. Spinotti is also Brett Ratner's favorite cinematographer, judging by his credits, so he's really developed a pedigree for making a movie look better than it actually is. There are moments in Public Enemies that would make Terence Malick shed a tear of appreciation, beautiful shots of Johnny Depp standing in the sunset or the wonderfully self-reflexive scenes inside a movie theatre. Too bad that all of the actors are performing as if they are guests in a museum. Don't get too rowdy, you might break the Michelangelo!

To be fair, the actors do their best with what they are given. The script, cobbled together by Mann and Ann Biderman (creator of the excellent "Southland" TV series) alongside Ronan Bennett ("10 Days to War"), and based on a book by Bryan Burrough, spends little time cultivating real personalities. The decision to make both Dillinger and Purvis quiet, private men may be historically accurate and even have seemed like a good idea at the time, but if you're going to make your two leads so pervasively hollow, it might be good to consider adding a third character to give the film some zazz. Public Enemies is supposed to be a movie about real people, but instead, it's a bunch of play-acting with constructs. Like that porno movie I already compared it to. Or a video game. The "Gangster Violence" franchise. 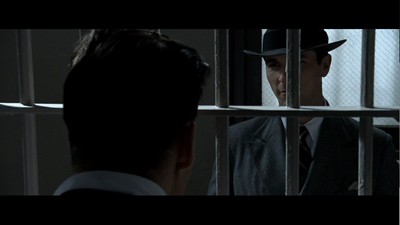 Video:
Go big or go home! Michael Mann shot Public Enemies at a jaw-dropping 2.40:1 aspect ratio, and the anamorphic transfer is lovingly rendered to capture every glint, every sliver of light, every little shadow. I was surprised to see some occasional spottiness in a one or two of the darker scenes, but these were rare mistakes in an otherwise excellent transfer. Some of the faster scenes also get a little fuzzy, but that could also vary TV to TV. Colors look good, the grain is under control, and the image is free of any glitches or scrapes.

Sound:
The original English soundtrack is in Dolby 5.1 or 2.0, and there are also Spanish and French dubs mixed in 5.1 (subtitles for each language are also available, with the English titles being geared toward the deaf and hearing impaired). I was pleased overall with the audio of the film. It has dramatic swells and excellent sound effects that move around the room and create an atmosphere that at least sounds more thrilling than it actually is on screen. 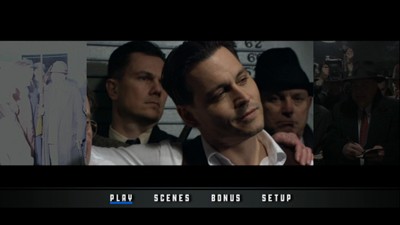 Extras:
Public Enemies is a two-disc release, coming in a standard plastic case with a hinged double-tray and a cardboard outer slipcover. There is an additional digital copy available for home users and an insert in the case explaining how to access this.

DVD 1 has two bonus features, a very good audio commentary with Michael Mann and a 10-minute featurette called "Larger than Life: Adversaries" that focuses on the relationship between gangster and lawman, and earns good points by including actual newsreel footage and for interviewing Melvin Purvis's son. The commentary is the real star on this disc, though, with Mann being as thorough in his discussion of Public Enemies as he was in putting it together. 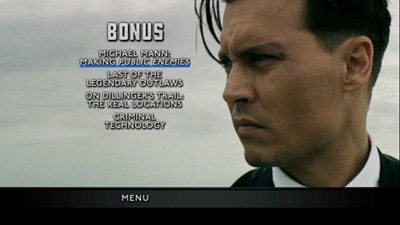 DVD 2 is all extra features. They are as follows:
* Michael Mann: Making Public Enemies (20 minutes, 30 seconds): Your basic behind-the-scenes with cast and crew.
* Last of the Legendary Outlaws (8:45): Looking at the historical facts of Dillinger's life, including vintage newsreel footage.
* On Dillinger's Trail: The Real Locations (9:45): Examining the recreation of the Depression era and the use of actual places from the story.
* Criminal Technology (9:40): Another historical piece, with experts discussing the weapons crooks used to stay ahead of law enforcement.

FINAL THOUGHTS:
I'm a sucker for a gangster movie, but Michael Mann's cold rendition of John Dillinger left me far too chilled to give Public Enemies anything but a Rent It. Overly long, under developed in terms of character, and generally lacking in the blood and guts department in any but the most literal of senses, Public Enemies is worth a look for how pretty it is and for the way the actors struggle to make something out of the straw men that have been written for them. Just remember that the more gorgeous the movie gets, the more boring the rest of it becomes. 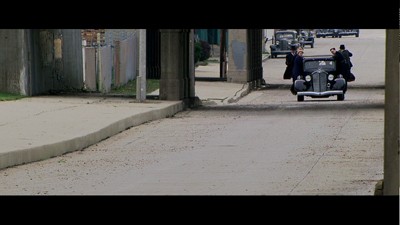