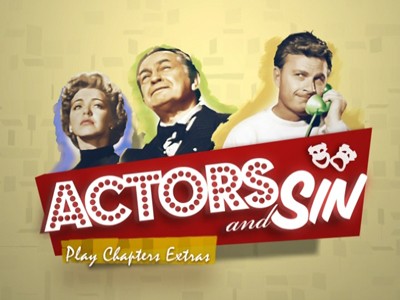 The 1952 comedy Actors and Sin is a curious little antique from the back shelves. It's two movies in one, both written by Ben Hecht, who also directs the movie alongside cinematographer Lee Garmes and narrates the second half of it. The writer of The Front Page, Kiss of Death, and Notorious turned his humorist's eye on two of the mainstays of modern entertainment. The first half of the film is a short morality play called Actor's Blood, a tale of the legitimate theatre; the second half, Woman of Sin, is a send-up of Hollywood greed. Both are light, breezy, and inconsequential, though admittedly written with an expert's ear for dialogue and a knack for clever story twists.

Actor's Blood opens the film in New York, starting at the near-end and working its way back. Broadway star Marcia Tillayou (Marsha Hunt, Raw Deal) has been found dead in her apartment, shot twice. Her body is being fawned over by her distraught father, Maurice (Edward G. Robinson), an actor himself who, as we find out, saw his daughter rise in fame even as his own status declined. The tale of Marcia is one of a girl who lets success go to her head, alienating critics, fans, and producers, as well as her playwright husband (Dan O'Herlihy, Robinson Crusoe). This bad behavior is followed by a series of flops, and then murder. There are certainly plenty of suspects, and the scandal puts both father and daughter back in the spotlight.

Segment two slingshots us across the country to Hollywood. The fast-talking chiseler Orlando Higgens (Eddie Albert, Roman Holiday) is receiving what he thinks are crank phone calls from a crazy writer, the author of something called Woman of Sin. Only after Higgens tells the writer, Daisy Marcher, to never call his office again does he discover that a mailing mix-up has landed Daisy's story on the desk of movie mogul J.B. Cobb (Alan Reed, Viva Zapata!), a man Higgens once told to pass on Gone With the Wind. Cobb isn't going to miss another shot at a big epic, and he offers Higgens the moon. Problem is, the agent has no idea where the writer might be, and when she finally does emerge, it turns out she's a nine-year-old girl (played by Ben Hecht's daughter Jenny).

Both stories are about 40 minutes long, and both move at an efficient pace, a quality Ben Hecht is particularly known for. His dialogue has a natural rhythm that drives his scripts, and his actors here are well chosen for their gift of gab. Edward G. Robinson is clearly having a good time as the hammy thespian Maurice Tillayou, and it's almost too bad that the stories don't cross over so he and Eddie Albert can trade jabs. Though Albert is most famous for his more mild-mannered TV roles, he was actually a pretty slick customer when he wanted to be. The only letdowns here are the child actors in the Woman of Sin segment, who never get past the realm of playacting. You can even see Jenny Hecht pause to remember her lines or take an off-screen cue.

The problem here isn't with the actors, though, it ends up being with the material. Hecht clearly knew his way around a Broadway stage and a sound stage alike, but much of Actors and Sin comes off as too inside, as one member of an exclusive club sticking his elbow into the ribs of the other members of said club, and outsiders can only keep up as they may. This is made more disappointing by the fact that the stories themselves are fairly hokey and predictable. Actors and Sin comes off as a lark, a private joke for the business wags. In that way, it's too surface slick and there ends up not being much underneath. It's also a little clumsy. Otto Ludwig, who previously edited Hitchcock's Saboteur as well as an impressive string of B-pictures, is off his game here. In both segments, there are some pretty hard cuts within scenes where he smashes from one angle into another, but seems to keep an extra second or two on the second clip. It often looks like the camera finds the actors standing there waiting for the director to call action, and then they pick up and go. For a movie that is about movies, you'd think they'd at least have their technique together.

I've certainly seen plenty of worse movies than Actors and Sin, and despite its hackneyed narrative, it is actually very watchable. Ben Hecht's sense of timing means the flick never slows down enough to get too boring. The bicoastal concept is also pretty cool, and it's one I am surprised I haven't seen repeated. This would maybe make for a good matinee lead-in on a double-bill with a better Hollywood movie like The Bad and the Beautiful or the stage drama All About Eve. But then, the coupling may also make the flaws of Actors and Sin all the more obvious. It'd be like the kid who is the valedictorian of his small-town high school who gets to Harvard to discover he's strictly bush league. Sometimes competition isn't a good thing. 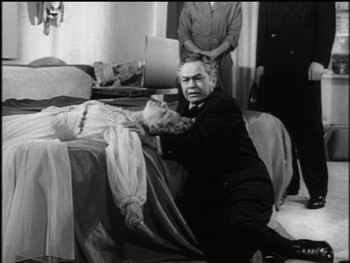 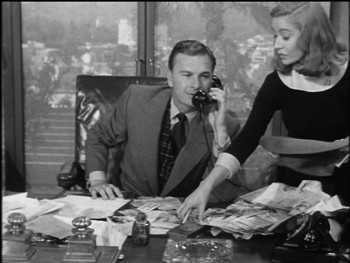 Video:
VCI and Kit Parker Films brings Actors and Sin to DVD in full frame at a 1.33:1 aspect ratio. The black-and-white image is said to have been digitally restored from an original negative, and a short demonstration of the before and after that is included as a bonus feature does show quite a bit of work was done to stabilize a shaky image and clean up dirt and grime. It's far from perfect, however. The picture often burns hot and looks blown out, and the resolution remains fuzzy, suffering from enhanced lines and digital combing. It's not awful or anything, but not on par with some of the more high-end restoration jobs that have set the standard for how we view classic movies on DVD.

Sound:
The basic mono mix of the original soundtrack is pretty good. The audio has good tones and only a little extra hiss. The dialogue rings through clearly, and the music is never tinny or distorted. I heard no major glitches.

Extras:
As I mentioned above, there is a short demonstration of the restoration of the original negative of Actors and Sin used for this DVD, as well as the movie's original theatrical trailer.

A new interview with actress Marsha Hunt is the only substantial bonus here. It was conducted by Joel Blumberg and runs just over half an hour. They discuss the actress' early career, her experience with Ben Hecht and Actors and Sin, and the Hollywood blacklist and Hunt's post-Hollywood life.

FINAL THOUGHTS:
Actors and Sin is a cute experiment in content, a double bill linking a story of a Broadway family with a goofy satire of 1950s Hollywood. It is distinguished by the fine writing of Ben Hecht, as well as standout performances by an excellent cast. Unfortunately, the sum of these parts is just a trifle and not good enough to overcome hollow, clichéd plotting. If you like self-reflexive entertainment and slick old-Hollywood productions, it's worth a Rent It. The kind of thing you watch once and move on from, no better or worse for having encountered it. 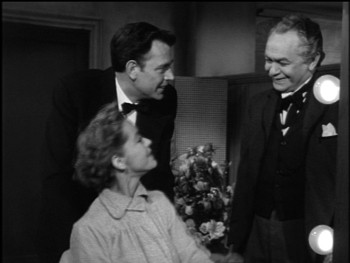 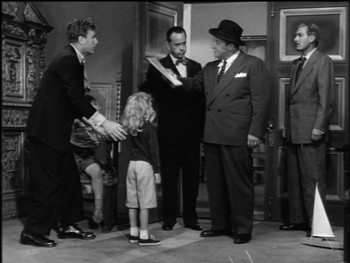