Warner Bros. // R // January 26, 2010
List Price: $28.99 [Buy now and save at Amazon]
Review by Stuart Galbraith IV | posted January 28, 2010 | E-mail the Author
Don't let the garish cover art, suggesting as it does a limbo contest in Discoland, sway you. Fame (1980), the Alan Parker feature film, is superior to the 1982-87 television series that followed it, and positively light years ahead of the alarmingly clueless and depressingly homogenized 2009 remake. This Fame, an ensemble film about students at the New York High School of Performing Arts, is not only franker and more emotionally honest, its themes are as relevant today as they were three decades ago.

The high-def transfer helps this timelessness immeasurably; it's a knockout. Though fashions have changed, the film looks practically new, and the two 5.1 mixes are also noteworthy, especially coming from a film made during the early days of Dolby Stereo and digital recording. The extras, though ported over from the 2003 DVD, are also well above average, full of information and warm nostalgia. 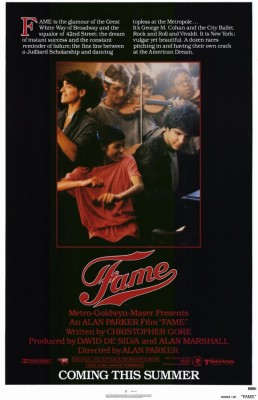 The film is divided into five acts: Auditions, followed by vignettes specifically tracing seven students through their Freshman, Sophomore, Junior, and Senior Years.

Doris, Montgomery, and Raul, the latter going by the stage name Ralph Garci, somewhat dominate the other characters. Doris is a naïve Jewish girl from Brooklyn whose identity has been stifled by a well-meaning but overbearing stage mother (Tresa Hughes, very good here). Raul/Ralph hides his painful family life in the South Bronx behind an abrasive cockiness and an unhealthy adulation for the late comedian Freddie Prinze (who committed suicide at the age of 22). Montgomery, the son of a respected stage actress, is coming to terms with his homosexuality. (To say the least, McCrane's sweetly gentle characterization makes a stark contrast to the reprehensible surgeon he later played on ER.)

Meanwhile Coco, over-confident about her street smarts and showbiz savvy falls for the most obvious of cons when a sleazy would-be director (Steve Inwood, genuinely creepy) offers her a "screen-test"; Bruno finds his synthesizer-playing at odds with the more traditional classical tastes of Mr. Shorofsky; Lisa's complacency about a lifetime of dance is shaken by Miss Berg's decision to cut her from the program; and Leroy, homeless and a functioning illiterate, violently butts heads with no-nonsense Mrs. Sherwood.

Perceptions of Fame have been skewered partly by the film's half-dozen or so integrated musical numbers, especially the hit title track, sung by Irene Cara, which famously (but unbelievably) has the students dancing in the streets, blithely disrupting traffic. Though a lively set piece, in fact "Fame" is just about the weakest number in the entire film, and the one set piece that's dramatically utterly unjustified. The scene comes out of nowhere, and probably should have been cut (along with all footage of Bruno's father, a broad characterization that doesn't fit with the rest of the picture). Further, both it and the film's title suggest a movie about teenagers preoccupied with stardom, almost the antithesis of Christopher Gore's screenplay. (The one student on the fast track to Hollywood stardom turns up later in the film working anonymously as a waiter.) The original title was to be Hot Lunch, also the title of a superior musical number and a reminder that this is a public high school; whether students succeed or fail is entirely up to them.

What's impressive about the R-rated Fame today is its frankness and honesty about teenagers trying to live up to their parents' and their own expectations, of blossoming sexually, of experimenting with drugs and alcohol, of emotional maturity and creative ability developing at different rates, of underprivileged kids finding hope and meaning in their lives through artistic expression. One thing Fame does especially well is how it depicts teenagers for whom poverty and/or extraordinary skills have turned into proto-adults. Most think they're more mature than they really are, and the film doesn't shy away from their occasional pretentiousness or foolishness.

For these kids, dance and drama and music are liberating, though this liberation also tends to further contrast their unhappiness at home. Bullshitters Raul and Leroy especially have big chips on their shoulders, and with good reason. And as filmed in pre-gentrified New York, director Alan Parker doesn't pull any punches in showing just how miserable their home lives really are.

Like the often exhilarating editing, the cinematography by Michael Seresin strikes a seemingly unreachable balance between the stylized, powerful musical sequences and the uncompromised gritty realism elsewhere, almost documentary-like at times. One scene especially captures all of Fame's qualities at once: Doris finally breaks free of her mother's stranglehold at a midnight screening of The Rocky Horror Picture Show where, inspired by the weekly performance in front of the movie screen, Doris leaps to the stage joining in on "Time Warp." The scene really authentically captures the atmosphere of those screenings and that era wonderfully well.

My Blu-ray defaulted to hidden Japanese menus and language options, triggered by my purchased-in-Japan PlayStation 3. The 1080p presentation of the 1.85:1 spherical Panavision production, originally Metrocolor, is outstanding, among the best I've seen for a non-scope color movie of this era. I haven't seen the film since its 1980 release in America and a 1982 run in Britain, but this Blu-ray has strikingly richer colors and better contrast than I recall in those 35mm theatrical prints. According to the IMDb, "Much of the music was recorded ... on a ...system that digitally encoded two channels onto a video signal, then recorded it to 3/4 inch video tape. The final mix was analog on the standard six channel 70mm Dolby Stereo." This may account for the soundtrack's rich directionality, capturing beautifully the chaotic wall of noise atmosphere of the school. Dolby TrueHD and Dolby Digital 5.1 options are available, along with 2.0 tracks in French, Spanish, and German, a mono Italian track, and optional subtitles in all those languages plus Bahasa, Chinese, and Korean.

Supplements are all oldies, ported over from the June 2003 DVD release, and all in standard-def: an audio commentary with director Alan Parker with video branching (billed as a "Class Reunion Commentary) featuring actors Lee Curreri, Laura Dean, Gene Anthony Ray, and Maureen Teefy. Also included is a 1980 featurette, "On Location with 'Fame,'" a 16:9 enhanced trailer, and "'Fame' Field Trip" to the school (but not the actual filming location) that inspired the film. Finally, a CD "Soundtrack Sampler" offers four numbers: "Fame," "Hot Lunch Jam," "Red Light" and "Fame" (instrumental version).

Assuming enlightened parents will let their teenage kids watch an R-rated movie, I hope today's generation of kids initially drawn to movies like High School Musical and the 2009 remake of this will eventually wind their way to this excellent Blu-ray release of an underrated, often misunderstood film with many fine qualities. A DVD Talk Collector's Series title.