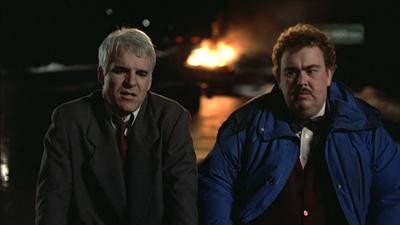 There's at least one perfectly-written scene in Planes, Trains and Automobiles, and it comes near the beginning. Neal Page (Steve Martin) ends up stuck in Wichita when his plane makes an emergency landing, and the only help he has is from his seat-neighbor Del Griffith (John Candy), a motormouth shower curtain-ring salesman that Neal has grown to hate over the course of the flight. Del has a hotel reservation when everywhere else is booked, so Neal reluctantly agrees to room with him in what turns out to be a one-bed room. After several speed bumps, Neal and Del are bunked up together, and Neal is on the verge of sleep when Del starts clearing his throat, over and over again. Neal tries to ignore it, but around the twenty-fifth cough, Neal gets out of bed, unleashes a torrent of insults at Del and begins to leave.

Del, however, does something surprising. Instead of tossing Neal out and telling him he's on his own, Del puts up a defiant emotional wall that fills Neal with regret. If every buddy movie for the rest of time could study this scene and learn something from it, the world of cinema would be a better place. Before it occurs, Candy's performance perfectly mimics the worst kind of annoying pleasantness, and the jokes, though clever (like the taxicab chase featuring guest star Kevin Bacon), are sort of broad and harmless. 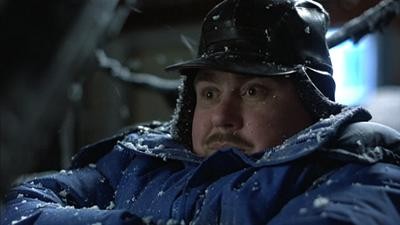 But the argument scene is special, revealing an equal amount about both characters rather than merely providing a short-lived conflict. First of all, it's amazing how the viewer can relate to Martin both before and after his miniature rant; his barbs about making a conversation interesting are hilarious, and the look on his face after Del stands up to him is crushing. As far as looks go, though, the mix of battered-down emotional resignation and sense of dignity in Candy's eyes is astonishing. There may be dialogue, but Candy's conveyed the message before his character says a word, and the way Neal climbs back into bed as a silent sign of apology and surrender caps the scene perfectly.

And that's just the scene itself. There's plenty more in Planes, Trains and Automobiles that can be attributed back to it. For instance, as Michael McKean notes in the extras, it lets the audience buy that these two guys would end up sticking together. Unlike so many other comedies, there aren't any MacGuffins that Neal's bringing with him, nor any useless, silly ultimatums hanging over his head; he's just gotta have Thanksgiving dinner with his family, no exceptions. In his brief moment standing there before putting his hat back down, Neal is choosing not to leave, choosing to value Del's feelings more than the aggravation it causes him, and doing it once ultimately means he'll do it forever. In a later scene where Neal tries to suggest that he and Del should separate, you can almost feel that look on Del's face eating away at Neal inside, along with the self-awareness that he doesn't really want Neal to go.

The film touches carefully on the subject of Del's loneliness, never painting Del to be a sad sack but just a too-nice guy who's aware of his own shortcomings and can't do much about them. Neal, on the other hand, is merely frustrated rather than hateful. Del isn't around when Neal finally breaks in the movie's most famous scene, but even in that one moment, Neal is still raging about the experience rather than at anyone in particular. Hughes also writes in a quiet sense of karma. 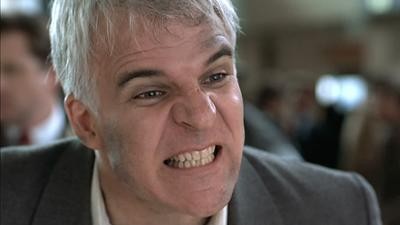 Neal only directly insults two people in the movie, and the first one cuts to the bone while the second punches him in the face, and Del, having already faced the brunt of Neal's anger, is right there to pick him up after his attitude has come back to bite him, ready to try chip away at Neal's guard once again. I don't know if people think of Planes, Trains and Automobiles as similar to Groundhog Day, but I'd say Neal's adventure is cut from the same cloth. To Neal, Del may be an overly talkative walking disaster, but he just can't help but relate to someone else in the same predicament, and when he adds up Del's personality in his head late in the movie, it's like an epiphany to him the way the world cosmically connected him to someone else.

Of course, I don't want to make the movie out to be a maudlin tale of regret. Planes, Trains and Automobiles is a goofy, hilarious comedy, effortlessly slipping all of the above in beside characters like mildly deranged Owen (Dylan Baker) and his wife Joy (Carol Bruce), whose "first baby come out sideways", and a series of hilarious comic scenes that start with Del adjusting the seat in his brand new rental car and conclude with the vehicle on fire. I may give a slight edge to Martin as The Jerk or Candy in the otherwise-corny Cool Runnings (coincidentally, Del suggests he might go to Jamaica), but both actors are very, very funny.

I remember watching Planes, Trains and Automobiles for the first time when I was younger, and I just didn't get it. My family rarely travels, and some of it just went over my head. I watched it again a few years ago and thought it was funnier, but even then, it didn't totally click with me. Finally, as an adult (I suppose), the movie's comedy just makes sense -- not just the immense tension that builds as the problems keep piling up, but in all the other moods that tinge the movie. This is a film that intends to be more than just funny, 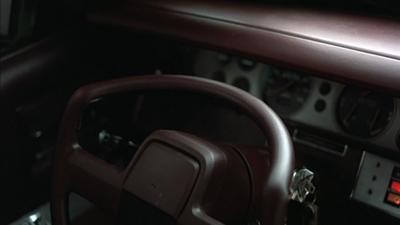 and that's what makes it special.

The DVD
I bought Planes, Trains and Automobiles at Target, where they'd put the DVD on the shelves two weeks early by accident. My copy came with a slipcover with little plane, train and automobile icons under the title, without any image of the two stars on it, but I understand regular copies will feature a lenticular slipcover, with Martin and Candy standing in the snow next to their luggage. Underneath either slipcover is the classic poster image, augmented here with an airport scrolling sign with an implied crude joke on it. I'm not a huge fan of it, really. There's no insert in the non-Eco-Box case, and the disc has a silver finish.

The Video and Audio
Earlier editions of Planes, Trains and Automobiles on DVD were fine, but they looked like a film from 1987, with the sharp black shadows, a sheen of grain and oddly saturated colors. This new disc sports an all-new 1.85:1 anamorphic widescreen transfer that looks great. Dark scenes still look a little spotty from time to time, but anything in the daylight features vivid colors and strong skin tones, which make the movie look like it was made yesterday. I may have spotted some light touches of edge enhancement in the distant background of a couple of shots too, but overall, fans should be very pleased by the upgrade.

Dolby Digital 5.1 also sounds noticeably cleaner and crisper than before, although the jump isn't as significant. Like all of Hughes' films, Planes, Trains has a great soundtrack, which is replicated with good use of surrounds, as is Ira Newborn's score. The film takes place in pretty much every setting imaginable, too, which it reproduces to good effect. English, French and Spanish subtitles are also included.

The Extras
3 featurettes are included: "Getting There is Half the Fun: The Story of Planes, Trains and Automobiles" (16:44), "John Hughes For Adults" (4:17) 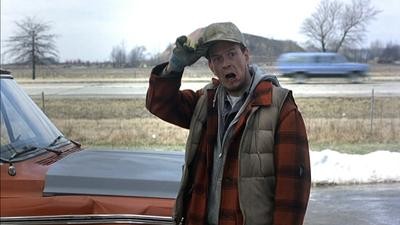 and "A Tribute to John Candy" (3:07). All three of these are half making-of, half archival video footage of a press day with Hughes, Martin and Candy. Martin has said over the years that Planes, Trains and Automobiles is his favorite of the films he's done, so it's a shame that they couldn't have gotten him to do his first-ever DVD interview to really flesh these featurettes out, but they do what they can without his participation. In general, they're fitfully amusing and lightly entertaining, but most interesting part is Michael McKean describing more of his scene, complete with a couple of photographs. The Hughes featurette ends with a vaguely shameful in-memoriam card -- nice idea, but it feels too obviously last-minute.

The only other bonus on this disc is a single deleted scene, called "Airplane Food" (3:31). It's a nice inclusion, although nothing I'll watch repeatedly. The interesting thing is that it looks pretty good -- not as good as the feature film, but colors are pretty strong.

Of course, as the story goes, there's more than an hour of deleted scenes for the film, with Hughes often referencing a three-hour version of the film laying in Paramount's vault. I've also heard that Hughes eventually took the negatives for his movies out of the studio's possession and held onto them himself, so who knows which party has them now. This is certainly a better DVD than the previous edition, but a bigger disappointment than Martin being a no-show is the fact that no more than the "Airplane Food" scene (a television standby) was dug up for this supposedly special edition.

A trailer for Paramount television shows plays before the menu and isn't accessible otherwise. The bonus features, like the movie itself, are subtitled in English, French and Spanish.

Conclusion
Planes, Trains and Automobiles is a great movie, and the transfer is better than ever. However, if you're not a videophile or a dedicated fan, the truth is that you don't really need this DVD. Unlike Paramount's wonderful special editions of other great 1980's comedies like Trading Places and Ferris Bueller's Day Off,

which made do with archival material, there really isn't enough to create a special edition for Planes, Trains and Automobiles without any new participation from the now late John Hughes and star Steve Martin or the movie's legendary deleted material. If this was just about the movie itself, I think Planes might just deserve a DVDTalk Collector's Series rating, but since I'm judging the whole package, I can only grant this release a recommended rating (even at the low $9.99 I bought my copy for), primarily for newcomers or anyone who doesn't already own the movie on DVD.