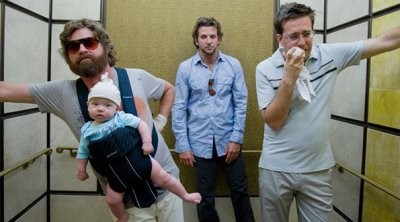 The Hangover is a buddy/road comedy that has many of the same plot points as director Todd Phillips' previous pictures Road Trip (1998) and Old School (2003). But the familiar structure is strengthened by the performances of a talented cast of comic actors. I would propose that these performances, along with the celebration of a clichéd male rite of passage and the trite Vegas setting, account for this film holding the current box office record for R-rated comedies.

Doug Billings (Justin Bartha) is to be married in a couple of days, but not before he goes to Las Vegas for a bachelor weekend with his friends Phil (Bradley Cooper) and Stu (Ed Helms), and brother-in-law to-be Alan (Zach Galifianakis). After arriving in Vegas at the wheel of his father-in-law's classic Mercedes, the quartet pledge their friendship and embark on Doug's "final" evening of debauchery. Cut to the next morning. Phil, Stu, and Alan wake up in their $4,200-per-night Caesar's Palace suite. Doug is nowhere in sight. There is a tiger in the bathroom. Stu has lost an incisor. And there's a baby in the closet. The three guys proceed to reconstruct their evening, find the baby's mother, and locate Doug - all while trying to get back to Los Angeles in time for Doug's wedding.

The three lead characters - and the actors who portray them - are the reason The Hangover rises above the commonplace outlines of the screenplay. Phil is a sleazy hotshot, a schoolteacher who funds his Vegas weekend with his students' field trip fees; Cooper carries off the role with a likeable scumminess of the sort Robert Mitchum made famous. Stu is an uptight, browbeaten dentist whose long-term girlfriend treats him like shit and has cheated on him at least once. He's a nervous Nellie and Ed Helms plays him just right - as someone who desperately needs to break out of his self-imposed prison. However, Zach Galifianakis nearly steals the entire movie as Alan, a weirdo with a child-like lack of awareness and knowledge about the world. He's got a lot of Teddy from Arsenic and Old Lace in him, along with a tendency to not wear any pants.

Although the set-pieces here are hit-and-miss - a bit involving Tasers should have been cut altogether - the actors and the quick direction by Phillips keep things interesting. Waiting for Galifianakis's oddball line readings alone is enough to keep the average viewer engaged. But the script takes certain aspects of the plot seriously, particularly Stu's dilemma. While Phil's sleazy disregard for his job and family is not fully explored, he is wisely shifted into the third place of importance, since his character is flatter than Stu or Alan. The final credits roll over stills that document their forgotten night, ending the movie on a hilarious high note.

Overall, The Hangover is much funnier than it could have been. What could easily have ended up as a rude, colorless comedy ends up with a lot of laughs thanks to great casting and skilled performances.

The Package
This two-disc set is housed in a standard keepcase. The sole content on the first disc is an Unrated Version of the movie, running eight minutes longer than the Theatrical Version. The added content is almost totally expository - all of it seems to be in the movie's first half hour. It adds virtually nothing of value to the film, slowing down the first act unnecessarily. Stick with the Theatrical Version if it's your first time seeing The Hangover. That's on the second disc, along with all of the bonus content.

The Video
The widescreen 2.35:1 transfer is excellent. This brand-new 2009 release maintains a crisp sharpness that replicates the brightly-lit Las Vegas locations and production design with strong fidelity. Excellent contrast and bottomless blacks elevate the transfer to the top tier of visual presentation. Is Warner Brothers still the best in the business when it comes to video quality?

The Audio
The 5.1 surround track is very good and naturally dialogue-driven. Still, there are scenes where surrounds are used judiciously, even if the mixing seems to lack depth at times. More than any other aspect of the generally fine soundtrack, I take issue with the choice of music. Phillips favors heavy hip-hop, and uses it sarcastically against images of four white dorks out on the town - this particular musical joke is completely stale at this point, having been used repeatedly in bad comedies and beer commercials. It comes off as weak here. It was an avoidable error that deadens scenes that otherwise work. French and Spanish surround tracks are available, as well.

The Extras
All of the extra content is on the second disc, with the Theatrical Version of the feature. First up is a commentary track with director Phillips and actors Cooper, Helms, and Galifianakis. It's a group talk that is okay, and funny in places, but not enthralling. An interactive Map of Destruction allows the viewer to tour the locations where The Hangover was shot. The Madness of Ken Jeong (7:55) has the actor discussing his character Mr. Chow and introducing some outtakes; there's some good stuff here. Action Mash-Up (0:36) is a silly and disposable set of clips showcasing the film's stuntwork. Also fairly useless is an uncut version of the Three Best Friends Song (1:23). The Dan Band! (1:08) showcases the work of the world's most irreverent - and best? - wedding band of all time. There's a great Gag Reel (8:16). Finally, there are More Pictures from the Missing Camera.

With the kind of script that could have gone the wrong way, The Hangover's three talented leads - and several great supporting players - make the film an entertaining comedy that even manages to feel novel at times. Good technical presentation, two cuts of the film, and a few decent extra features make a generous DVD package. Recommended.