A&E Video // Unrated // December 15, 2009
List Price: $29.95 [Buy now and save at Amazon]
Review by Stuart Galbraith IV | posted January 12, 2010 | E-mail the Author
In one of the all-time great blunders in the history of the medium, back in the 1960s Britain's BBC television network routinely and arbitrarily degaussed (erased) all video recordings of its own programs, in many cases failing to preserve even a single archival copy. Innumerable classic television programs are presumed lost forever, though a handful have been recovered or reconstructed. One of these is Sherlock Holmes (1965-68), British television's second stab (or third, or fourth, depending how you count 'em up) at a Holmes series.

The first, from 1951, starred Alan Wheatley; Ronald Howard top-lined a better-known series in 1955, but that was produced by an American company in Paris and didn't even air in Britain until many decades later. In 1965 the BBC produced a new series with Douglas Wilmer, a good actor with an uncanny resemblance to the literary Holmes. Nigel Stock played Watson and thirteen episodes were produced. The series was brought back in 1968 but after both Wilmer and John Neville (who played Holmes in the 1965 film A Study in Terror) declined the role, another Holmes veteran, Peter Cushing - who'd starred in the 1959 Hammer film of The Hound of the Baskervilles - was brought in as Wilmer's replacement. Stock returned as Watson, and 16 more hour-long episodes were made.

However, of the 16 Cushing episodes, only five stories are known to survive: (the two-part) "The Hound of the Baskervilles," "The Sign of Four," "The Blue Carbuncle," "A Study in Scarlet," and "The Boscombe Valley Mystery." Missing are adaptations of such classic stories as "The Greek Interpreter" (featuring future Watson Edward Hardwicke), "The Naval Treaty" (with Peter Bowles), and "The Solitary Cyclist." The surviving shows have been gathered together for what A&E is calling The Sherlock Holmes Collection*, a modestly entertaining set geared mainly for Sherlock Holmes and/or Peter Cushing fans, of which there are legions.

A testament to Cushing's popularity may be A&E's decision not to release the Douglas Wilmer series at this time: though parts of two episodes from that series are MIA the remaining episodes survive intact. Wilmer, who also appears briefly as Holmes in the 1975 comedy The Adventure of Sherlock Holmes' Smarter Brother would seem ideally suited to the role; hopefully those shows will come to DVD eventually. 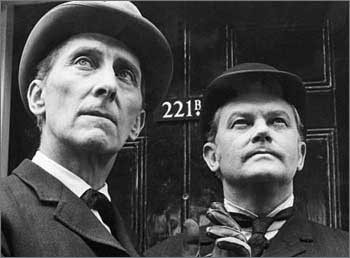 The Cushing series, reasonably faithful to Sir Arthur Conan Doyle's original novels and short stories, was in the usual manner of the period produced by the BBC on a combination of 16mm film and videotape: generally film for location shooting and exteriors, video for everything that could be done in the studio. This method of production was quite common all over the world except in the United States where prime-time hour dramas like this were almost without exception filmed in standard 35mm. For American viewers, the constant shifting between filmed and videotaped segments takes some getting used to, and some never do. The nature of '60s era videography tends to be both much more immediate and less forgiving: the lighting is harsher, the cheapness of the sets is more difficult to hide, mistakes and actorly gestures by the performers are magnified.

Sometimes this can work to a show's advantage: Doctor Who's earliest episodes had a difficult-to-describe minimalism not unlike the low-budget but effective noirs produced by Eagle-Lion Studios during the late-1940s. That show's producers turned a great disadvantage (almost) into an asset by embracing rather than trying to hide the format's inherent look.

Sherlock Holmes isn't quite so lucky. As exemplified by the thrilling opening titles montage (shot on film) - usually then immediately contrasted with static studio material, shot on tape - this series cries out for a more cinematic approach that it only fitfully delivers. It might have played better and dated less badly had the whole show been shot in 16mm.

As such, the familiar characters and many of the stories can't compare with their cinematic predecessors. "A Study in Scarlet" is the oldest surviving show among the Cushings (and it was Doyle's first Holmes story) but for some reason A&E opted to stick the two-part "The Hound of the Baskervilles" on Disc 1, a strategic mistake.

For starters, one can't help compare its studio-bound staginess to the far superior 1939 film (with Basil Rathbone) or, for that matter, Cushing's blood-and-thunder adaptation by Hammer Films, a popular film still less than ten years old in 1968. Though by far the best-known Holmes story, the other problem is that per Conan Doyle's narrative Holmes himself is barely in the first-half of the story at all and missing a good part of the second-half, too.

However, Cushing's fine Holmes is more front-and-center in the remaining episodes. His aquiline features, more severe in 1968 than they were in 1959, and familiar screen persona are a good fit with the character. Known among his colleagues as "Props Peter" (or, alternatively, "Props Cushing"), as Holmes he expertly juggles myriad props while making Holmes's famous deductions appear "elementary." It's not a distinctive, definitive portrayal - Rathbone and Jeremy Brett (in his prime) are way ahead of him - and Cushing's Holmes isn't all that different from his work as Hammer Films' Doctors Van Helsing or Frankenstein (in the latter case, at least in more benign characterizations such as 1964's The Evil of Frankenstein), but undeniably Cushing is a lot of fun to watch.

Stock's Watson is closer to the character's literary source than was Nigel Bruce's buffoonish if more famous one. There's a great moment (at least for Cushing fans) in "A Study in Scarlet" where Cushing and Stock have a long stretch of dialogue in a hansom cab, with Watson questioning Holmes' conclusions point-by-point. Stock totally loses his place, stumbling over lines for a good 30 seconds or so, but the two pros work through the confusion and eventually recover - to the point where most watching the episode probably wouldn't have noticed the mistake at all, bad as it is. (Wilmer left the series after plans were made to allow less time for rehearsals; this also upset Cushing, who apparently felt enormous pressure because of the time constraints.)

The six episodes/five stories that make up The Sherlock Holmes Collection are presented on three single-sided DVDs, with two episodes per disc. Given the production format described above, the episodes look fine for their age while the 2.0 Dolby Digital mono is perfectly fine, though the shows aren't subtitled or closed-captioned.

The only supplement is an intriguing one: Sherlock Holmes: The Great Detective (1995) an episode of A&E's Biography, though it may have first been produced as a stand-alone show in the U.K. In any case, it's an hour-long "biography" of the great detective, pieced together from the biographical bits found in Conan Doyle's stories. Much of this is told anecdotal style to a London-based Sherlock Holmes Society by none other than Dr. John Watson (David Burke). Burke had played the part in the first Holmes series with Jeremy Brett, but was replaced by Edward Hardwicke for the rest of its run, so it's especially nice to see Burke reprise the character here.

The 1968 Sherlock Holmes television series isn't really up to the level of the best film and TV adaptations, but it's still fun to see cult character actor Peter Cushing sink his teeth into the role again, and the adaptations themselves are respectable, just not distinctive.

* It's not to be confused with the similarly titled Sherlock Holmes: The Archive Collection, released almost simultaneously from Synergy Entertainment.