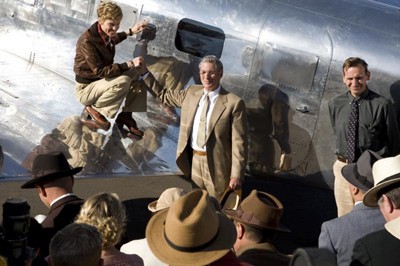 Amelia is a rickety old antique of a movie. This new biography picture about pioneering female pilot Amelia Earhart takes its lumpen cues from wholesome bios from the time when Earhart herself was going to the movies, looking to Jimmy Stewart in The Spirt of St. Louis and Gary Cooper's The Pride of the Yankees rather than more modern portraits like Walk the Line or even this film's distant cousin, The Aviator. Those newer movies aren't without their flaws, but at least they are dramatic. Amelia is out of step, full of spinning newspapers, hokey newsreels, and so much whitewash and starch, it can't help but stiff.

Hilary Swank stars in Amelia as Earhart. The film opens predictably as the aviatrix and her navigator, Fred Noonan (Christopher Eccleston), depart on their historic trip to try to fly all the way around the world. Director Mira Nair (Monsoon Wedding, The Namesake) and screenwriters Ronald Bass (What Dreams May Come) and Anna Hamilton Phelan (Girl, Interrupted) cross their fingers and hope our collective knowledge of history won't take the spice out of their story as they take us back to Amelia's youth and her slow climb into the record books. We see her first meeting George Putnam (a predictably boring Richard Gere, for once at the same speed with the rest of the film), the huckster publishing magnate that sent Amelia on her first transatlantic flight and her eventual husband. We see her cheat on him with Gene Vidal (Ewan McGregor). We even see her race a plane and shatter a precedent or two. Everything is there, it's just that none of it is interesting. There is no passion, no emotion, it wouldn't surprise me if even the married folk sleep in separate beds.

There are no fingers to point here, nothing so egregious that we can single it out and say, "Ah-ha! That's it! We've found the poison in the stew." The failing is owned by everybody, from the script all the way through to the editing. For a movie where a good portion of the plot centers on how to keep an airplane fueled, Amelia never finds any gas itself. The construction of the narrative is fundamentally flawed. Bass and Phelan hit the big moments but don't lend us any counterbalance to understand their magnitude. For instance, there is never any real explanation regarding the achievement of the first flight Earhart undertakes for Putnam. We're practically in the air before we know the team is shooting for Ireland. How can we be excited or nervous or anything if we don't know what we're in for? There's a lot of peanut butter and quite a bit of jelly, but no bread to hold it together. You can't have a sandwich without the bread! 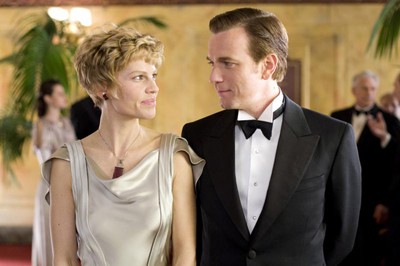 I remember first hearing about Amelia as a pet project for Hilary Swank. In concept, it sounded like a meaty role for an actress who enjoys a challenge. For all I know, she may have done an amazing job at capturing the true essence of Amelia Earhart. She does manage a fairly uncanny physical resemblance. If that is what the pilot really was like, though, how come nobody realized she's as dull as dirt? Swank ends up being a strange presence in the film. She often looks like she's daydreaming, as if Earhart were a ghost in her own life, having disappeared mentally long before her plane took a nosedive into the drink. There was even an odd hink in the audio mix that made Swank's voice sound disconnected from her body, like she dubbed her entire performance after the fact. It's disconcerting.

In the "if you can't say anything nice" department, I will say that the movie looked pretty, just as all Mira Nair films do. Cinematographer Stuart Dryburgh, who also shot Nair's underrated The Perez Family, captures everything with a golden shine, like the sun itself has blessed the production. The flying scenes are shot quite well. There is nothing that compares to replicating old prop planes and shooting an actor in the cockpit from the nose of the plane. Unfortunately, gussy this dog up as much as you want, and it still won't fly. Nair is ultimately saddled with a movie that will never get up to speed. It doesn't even have a climax, since we still don't know what happened to Amelia Earhart and Fred Noonan. One moment they are on the radio, the next they are gone. Much in the same way the name Amelia will be on Cineplex marquees this weekend and suddenly absent by next Friday. Only in this case, there is no mystery as to why.