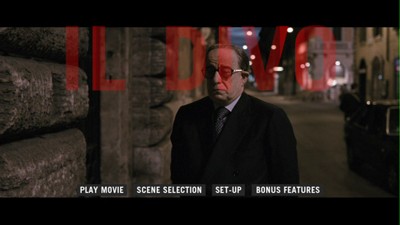 If you were looking for a concert DVD by a quartet of nearly sexless guys, then you've clicked on the wrong review. Run now, because I don't think the movie Il Divo is for you. In its opening scene, the main character undergoes acupuncture for migraines and ends up with a bunch of sticks in his head and face. He looks not dissimilar to Pinhead in the Hellraiser series. If you like your movies as bland as your music, that's likely how you're going to feel if you make it all the way through this picture.

Not that this is a horror movie. Rather, writer/director Paolo Sorrentino's Il Divo is a strange political film. 1/3 drama, 1/3 thriller, 1/3 technological marvel. I'm not sure it's all good, and I'm not sure I knew what was going on about 70% of the time, but I do know I couldn't help but keep watching.

The term "Il Divo" means "star" or "celebrity," and it's one of the nicer nicknames given to Giulio Andreotti, a leading politician in Italy who served as Prime Minister seven times. The film begins with his final regime, and it shows the inaugural meeting of his cabinet. Andreotti's political capos gather around him to talk shop, while the big man gets his face shaved with a straight razor. I couldn't help but think of another reality-based movie villain and the scene where Al Capone is getting shaved in De Palma's The Untouchables. Thankfully, the barber doesn't cut Andreotti the way he cut De Niro in the other movie.

I doubt the comparison is intentional, but then again, Il Divo would like to suggest to us that Andreotti may be a kind of Al Capone amongst the governmental set, and maybe even a little Pinhead, too (scary, deformed, not altogether human). Even before we see Andreotti onscreen, we see several title cards full of the rumor and innuendo that surrounds his fifty-plus years as a political player. Through the 1970s and 1980s, and up until the start of this story in the 1990s, many of Andreotti's rivals and critics died under mysterious, violent circumstances. It's suggested that he was connected to the Mafia and the Vatican alike, the head of a political party called the Christian Democrats. Is his reign part of a vast conspiracy, or did he manage to avoid ever being convicted of any criminal activity because he was clean? 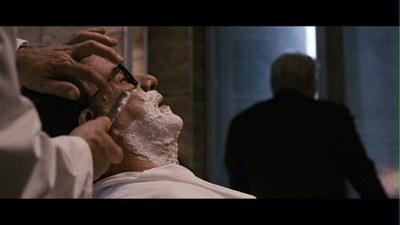 Paolo Sorrentino doesn't know how to answer that question, because he really can't. If anyone could, Giulio Andreotti would either be behind bars or sitting on a throne. Instead, what the filmmaker tries to do with Il Divo is amass the facts and capture just a little bit of the enigma that is Andreotti. If this strange man, whose various nicknames include "Beelzebub" and "The Hunchback," really is some kind of criminal mastermind, he may be the most bizarre to ever live. Toni Servillo (Gomorra) plays him as a stiff, quiet, almost misshapen human being, a portrayal I can only assume is accurate. It's an eminently consistent performance. Servillo sticks to the routine even when it borders on caricature. He often looks more like a special effect than an actual human, like some concoction of latex, face powder, and CGI. Detractors and admirers alike see this weird persona as part of Andreotti's success: his appearance and posture make it impossible to penetrate any further.

Il Divo doesn't follow any conventional narrative. Rather, Sorrentino employs a loose, vertiginous structure that he hopes will allow him to cram in as much information as possible. The first part of the movie piles on the characters, giving us the full role call of everyone involved in this monolithic tale. Even lively onscreen indicators aren't much help in keeping all the participants straight. Good luck remembering who half of them are or what they do. At its most basic, Il Divo is more like a tally sheet than a movie, the gathered footnotes of a much larger story. In some ways it's a procedural, in some ways it's high drama distilled into digestible chunks. Essentially, it's an elevated talking-heads picture.

Seeing that this material would be fairly dry all on its own, Sorrentino and cinematographer Luca Bigazzi (Bread and Tulips) have decided to keep 90% of the shots moving. The camera rarely stands still. It is always pushing in or pulling out or circling the room, sometimes doing more than one move without even cutting. Longer scenes are diced up into shorter takes, often compounding the various camera moves, and it's up to editor Cristiano Travaglioli to piece it all together. The cutting really deserves an award, this is the editor's picture. Given the way Il Divo was shot, I can't imagine anyone being more important to the final outcome than Travaglioli.

The aesthetic gamble largely works, and for the first hour or so, Il Divo is absolutely riveting. Part of that might just be the newness, of being unable to pause for breath or turn away lest we miss a crucial piece of the puzzle. It does start to get a little tiresome as the movie wears on. The sheer weight of everything Sorrentino has piled on begins to cause the film to stumble. I almost wish he had maybe spent more time in the trial, let the movie take a slightly more conventional route in the final stages, just so someone could sift and sort the information for us. Sure, that would have necessitated the filmmaker taking more of a stand, but I'm fairly confident he wanted us to think Giulio Andreotti is the bad dude so many say he is. The crawl at the end suggests there is a whole other movie waiting to be made about this story. Trials, convictions, appeals, overturned sentences--Dick Wolf could have a new franchise. Law & Order: Il Divo.

I am sure many will finish Il Divo unsatisfied, wishing that it had been a little more clear in purpose and a little less caught up in its own rhythm. That's perfectly understandable, obviously I even think that, too. Still, I liked this movie despite its problems. It's audacious and challenging, and even if it doesn't maintain its energy all the way to the finish line, it's still worth watching Paolo Sorrentino and crew make a run for it. 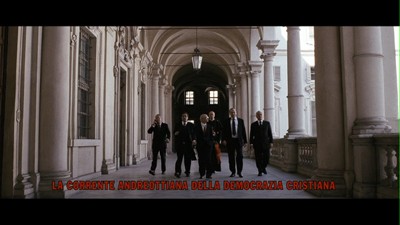 Video:
Sorrentino and Bigazzi shot Il Divo at an ultra wide 2.35:1 aspect ratio. The anamorphic transfer looks stupendous, full of rich colors, free of any interlacing or digital problems, and also clean of scratches or dirt. Once or twice I thought some of the black shadows in dark scenes looked a little murky, but these were rare occurrences. Minor grousing about an otherwise stellar piece of work.

Sound:
The original Italian soundtrack is mixed in Dolby 5.1 with optional English subtitles. Beware, there is a lot of talking here and the movie moves very fast, and there are more than a few times where you're going to have to employ some speed-reading to keep up. The audio atmosphere of the movie is amazing, with lots of movement within the speakers. 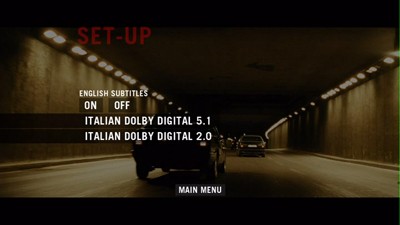 Extras:
Il Divo comes in a standard plastic keep-case with an outer slipcover.

The 31-minute "Making of Il Divo" covers just about all the territory you could want in regards to the movie. Sorrentino, Bigazzi, Travaglioli, and composer Teho Teardo discuss the technical aspects of the film, background about the history that fueled the production is revealed, and we even get to see Toni Servillo getting into the Giulio Andreotti make-up. Lots of on-set footage is used, and the producers and more of the actors are interviewed, as well.

A 7-minute, 15-second FX Reel looks at how some of the ambitious shots were achieved, including showing how they were shot and then digitally composited. Some of it is as complicated as using computers to recreate landscapes, as simple as changing day to night. The 12 minutes of Deleted Scenes play as one single reel, and are mainly short snippets of inconsequential moments. There are 11 in all, so that's barely a minute per. The most memorable is a meeting with Gorbachev that is only otherwise briefly mentioned in the movie proper. Another is a scene from the film recut with music by the Gossip, which makes it appear comical. Andreotti was not very rock 'n' roll.

An interview with Paolo Sorrentino finishes the disc. At 12 minutes, 15 seconds, this is more footage from the same interview as in the "Making Of."

FINAL THOUGHTS:
Paolo Sorrentino's 2008 Il Divo is an energized portrait of one of Italy's most notorious politicians. Giulio Andreotti, played here with inventive affectation by Toni Servillo, had been in the upper echelon of the Italian government for more than 50 years, amassing a legion of enemies and even more rumor and accusation, before he was put on trial for possible Mafia ties in the 1990s. Il Divo guides us through the players and the criminal innuendo, taking us from the Vatican to the back streets where assassinations may or may not have gone down. No questions are really answered, and though the visual style of the film keeps everything moving, Il Divo does drag some. Excepting that, it's still an unique animal, and the DVD package helps fill out the more interesting aspects of the film. Recommended. 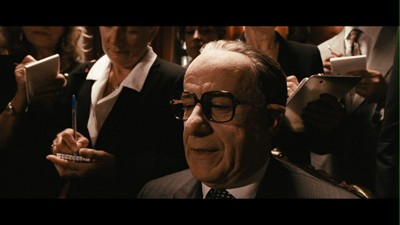