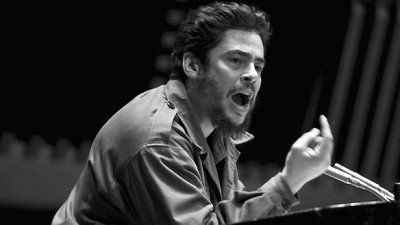 Few twentieth century figures have been so strangely abstracted from the reality of their times as Ernesto "Che" Guevara. From a young age (I was born 9 years after his execution), I have only known his name and image. The use of Che's visage on posters and t-shirts, and the sloganification of his nickname, say much about the ability of capitalism to use even its supposed enemies for profit - while saying nothing at all about the man. Attempts at film biographies have mostly failed, not counting the recent and much-lauded The Motorcycle Diaries, directed by Walter Salles. Steven Soderbergh's four-and-a-half-hour two-part Spanish-language epic Che is a patient, detailed treatment of two key segments of Che's life, and while it doesn't fully succeed as a revelation of his character, the film does reveal and enliven history with an expert's storytelling technique.

Che: Part 1 tracks Che's involvement in the Cuban Revolution, from his first meeting with Fidel Castro in Mexico City, to the key battle at Santa Clara, which immediately resulted in Batista's fall from power. We see Che as Castro's right hand, the philosophical heart of the Revolution, and a principled and relatively egoless military leader who insists that new recruits learn to read. Che regularly emphasizes the importance of morally sound behavior among both his peers and subordinates. All of this is interspersed with black-and-white flash-forwards to Che's 1964 New York visit and speech to the United Nations.

Che: Part 2 skips forward about six years after the Cuban Revolution to Che's time leading an ill-organized and ill-equipped group of would-be revolutionaries through the jungles of Bolivia for one year. It culminates in the guerrillas being stopped by the Bolivian army, with help from American "advisors." Che is summarily executed the following day.

Soderbergh is an eclectic, enthusiastic filmmaker whose love of his craft is always evident. He is a director comfortable and fluent working in a number of different modes and tones, whether it's the Hollywood polish of Ocean's Eleven and Solaris, or the do-it-yourself indie scruffiness of Schizopolis and Bubble. Che lies somewhere in between. It's a labor of love and determination that finds the director utilizing something close to the journalistic approach of his Oscar-winning Traffic. The film proudly bears the influences of Francesco Rosi, Gillo Pontecorvo, and Costa-Gavras. The tone is always realistic and character-oriented. You won't find narrative or stylistic flourishes here. We are down in the grit with these people. We feel the pressure of encroaching soldiers, the desperation of near-starved guerrillas, and the calm still soul of Che guiding his men and their actions by example.

These directorial choices reveal that Soderbergh's film looks upon Che Guevara with empathy, as a man who was driven by certain unwavering ideals. This will rile those who knew the real Che as less than saintly. Soderbergh has chosen his approach for a reason, however, and the film doesn't intend to fool us into icon-worship. In the film, Che is convincing as a character of unique, morally uncompromising strengths; yet in the storytelling, we see the weaknesses within and the ultimate failure of Guevara's belief that he alone could instigate and guide effective revolutionary warfare.

The success of this portrayal is assisted in no small way by Benicio del Toro's quiet, controlled, inward performance. Del Toro submits himself to the character as egolessly as the Che he portrays would have had it - there are no great actorly "moments" in Che. There are three or four scenes when Guevara exhibits naked emotion, and even those are restrained. Del Toro never indulges in theatricality, keeping his Che on an even keel; the character is guided only by an ideal - perhaps idealized - vision of himself.

The structure of the film's two parts suggests that Che's guiding principles were insufficient on their own and required much more than just his own guidance for a true revolution to be effected. Putting the darker aspects of Che's biography aside, Soderbergh skips from the success of Cuba to Guevara's demise in the haphazard Bolivian campaign. This choice is instructive in and of itself, as it challenges us to ask questions about Che and do our own research on the film's "lost years." Where did he go? What did he do? What on earth happened to him that transformed him from the silent master of the Cuban Revolution to a ragged figure in Bolivia who at one point becomes so frustrated with a stubborn horse that he stabs it in the neck?

Hannah Arendt's book On Revolution (1963) posits that true revolutions are rare things. She cites the American Revolution as one because it merely sloughed off an unwanted regime (the British Empire) and replaced it with an incipient one, built by the Founding Fathers before the first shots at Lexington and Concord. The Cuban Revolution may have been a successful revolution for similar reasons - popular support and low resistance worked in Castro's favor. But in Bolivia, Guevara was on his own, fomenting revolution for the sake of it, against forces that were by then wise to his game. Arendt's formula aside, the odds were against him.

In the end, Che provides an empathetic, if not sympathetic, view of a man who was by no means a simple do-gooder. He was principled, brave, and effective. He was intelligent, driven, and seemingly large-hearted. Even though the darker impulses and deeds that came to pass after the success of Cuba are not in evidence, Soderbergh and company do have an engaging, rigorous purpose: to explore the development and failure of political and social principles within a single noteworthy human being. This theme propels a technically proficient film that achieves rare intellectual engagement with the force of history.

The Package
The Criterion Collection presents Che in a typically attractive package whose design pays homage to the classic Korda photograph of Guevara. A card sleeve holds a quad Digipak-style fold-out, with the each of the three discs getting its own panel. The fourth panel contains a small booklet (featuring an essay by critic Amy Taubin), and, as an added bonus, a small poster-sized recreation of the box's cover design - a nice touch.

The Video
Che: Part 1 is presented in an anamorphic transfer at 2.39:1, while Che: Part 2 was shot at 1.78:1. The different aspect ratios are appropriate, as the first part covers a more positive, theatrical period of Guevara's life, while the second takes place in a more gritty, desperate time and utilizes more close-ups. Both transfers are wonderful. Che was shot on a new digital camera made by a company called - ironically - Red. The image has a very film-like quality; colors and black levels retain remarkable fidelity, never breaking up when moving from light to dark. Soderbergh's predilection for color filters is downplayed here compared to some of his other films, such as Traffic. The lighting scheme is more realistic and the camerawork - and the transfer - reflect that with pristine agility.

The Audio
The 5.1 Dolby Digital soundtrack is superb. Although Che contains its fair share of dialogue, along with stretches of silence, the entire movie is wonderfully mixed, with sound effects always present and adding a great deal to the atmosphere. It's subtle work, though; this is no Avatar. The vibrant, moody score by Alberto Iglesias bears much in common with the sound design, often blending with it effortlessly. The surrounds are quite active, and they come roaring to life during the intense gun battles.

The Extras
The Criterion Collection has included a wealth of extras here, starting off with a full-length audio commentary by acclaimed journalist Jon Lee Anderson, who is credited as the film's Chief Consultant, and is the author of Che: A Revolutionary Life - broadly accepted as the standard Guevara biography. Anderson's commentary is extremely involving, the outcome of years of research and interest in the film's subject. Anderson uses his expertise - and the commentary format - to provide context for Guevara's life and his actions in the film. Rather than serving as a play-by-play of the movie's background or production, Anderson stays focused on Che himself and it makes for an in-depth, fascinating discussion.

The third disc contains the remaining extras, and they are top-notch:

Making Che (49:49) is an excellent, candid behind-the-scenes documentary that reveals the production to have been extraordinarily trying.

Two groups of Deleted Scenes (15:32 Part 1, 5:26 Part 2) contain several interesting moments that, in my view, should have been included in the final cut. In a four-and-a-half-hour film, what's another ten minutes? They come with optional commentary by director Soderbergh.

End of a Revolution (25:52) is an indispensable 1968 documentary by Brian Moser who went looking for Guevara in Bolivia. Unfortunately, Che was killed just before Moser's arrival, but Moser found the site of his execution and the resulting film is stunning.

Interviews from Cuba contains two segments, Participants (23:07) and Historians (11:54) who offer their perspectives on Che himself and the Cuban Revolution. These interviews were conducted by the film's producers, Laura Bickford and Benicio del Toro, and provide some very interesting background and personal recollections.

Che and the Digital Cinema Revolution! (33:19) focuses on the Red camera and the potential for speed and reduction in costs allowed by the digital format.

In all, not counting the commentary, these features comprise nearly three hours of grade-A material.


Che is not for everyone. It's very long. And for all the action that it does have, this is mostly a character-driven historical drama that is rather quiet and contemplative. I was invigorated by this thoughtful, serious look at a complex historical figure. The performances, particularly by del Toro, are remarkable. As a film, Che will very likely grow in stature in future years. Its deep engagement with the past represents an intellectual commitment filmmakers rarely make, and its seamless technique is nothing short of masterly. Taken together with the outstanding package of extras, Che merits a first from me: a place in the DVD Talk Collectors Series.