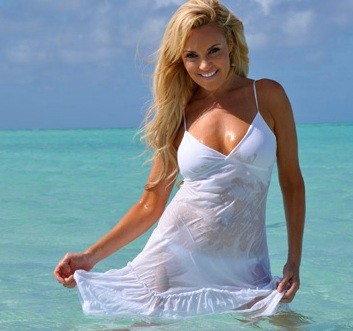 You know, I always greatly appreciated Bridget Marquardt on the Playboy reality show, "The Girls Next Door." She was the most mature (a plus in my book), the most naturally endowed (take that however you like), and perhaps the most clever Hefner concubine of the trio. I'm hardly suggesting the woman is a bespectacled Rhodes Scholar, but her ditzy blonde routine was consistently transparent, a fizzy act for the probing cameras to help secure her burgeoning Playboy legacy, along with a prized room inside the hallowed halls of the mansion.

Bridget also came across as the most carefree of the "Girls Next Door" trio. While Holly hip-checked her way into alpha bunny status and Kendra was...well, so very young, Bridget established a fun-loving, cool-surfer-chick persona that made for entertaining television, if you actually retained the admirable ability to sit through an entire episode.

Travel Channel obviously picked up the same spray-tanned vibe of starry charisma, offering the near-miss Playmate her very own show in 2009 entitled "Bridget's Sexiest Beaches." For a cable network that previously assumed Samantha Brown in a one-piece was enough sex appeal to last the year, bringing Bridget onboard was a statement that Travel Channel was ready to play aggressively in the bikini-safe cheesecake programming sandbox with the big boys. However, in their quest to shamelessly titillate and glom off the astonishing success of "The Girls Next Door," the network actually produced a warmly moronic, determinedly jovial travelogue program that wielded Bridget's golden curves, ivory smile, and tireless pep marvelously.

Bonus? No more Samantha Brown in a one-piece. 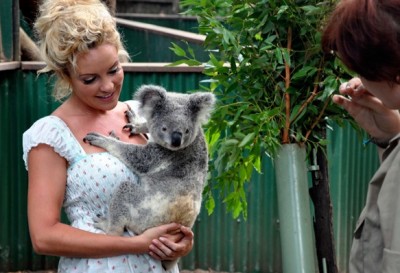 "Sexiest Beaches" is unrepentantly goofy, sending Bridget around the world to tour natural wonders, mingle with the often lustful or shy locals, and mercilessly flirt with the camera. The show is pure sun-kissed escapism, and while simplistically designed, it's carried wonderfully by Bridget, who showcases an endearing lack of on-the-spot television prowess, but makes up for her neophyte travel show presence with her beaming personality. Looking a little unsure of herself as she hikes around largely foreign lands (with plenty of foreign men around to hit on her), Bridget's gift is her veneer of sunshine, where every discovery is the bestest ever, and every impressive vista a dream come true.

The show's refreshing lack of cynicism is a solid motive to stick with it for 12 episodes. The teeny-weeny bikinis, crystal-clear oceans, and exotic nightlife are a major reason to carefully study the show, but its earnestness is appealing, channeled well through Bridget's dim-bulb excitability. She's up for anything, from cliff diving to beachside painting, visiting homes and dance floors to soak up the local culture. And if you take this lady to a restaurant, don't you dare order seafood for her -- a bold culinary revulsion popping up frequently during the series that ultimately sold me on the host. Bridget actually hates things! It's not all just a glorification of places I could never afford to visit and things I would never eat. There are some gloriously honest reactions within this celebration of resorts, beach life, and ample cleavage. 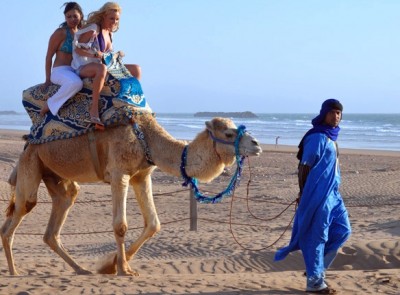 Bridget's "Girls Next Door" roomie, Kendra Wilkinson, comes by to try out some kayaking.

The first seafood episode! Watch as Bridget chokes down fish and dodges clams. A snail encounter is a comedy highlight.

Playmate Cara Zavaleta joins Bridget for this outing, but passes on the violent parasailing experience.

Playmate Sara Jean Underwood tags along for some cliff diving and a trip to a haunted island.

Seafood alert! Bridget hates catfish. It's also a battle of the tans as actor George Hamilton and Playmate Patrice Hollis help Bridget acclimate to the state.

Perhaps the best episode of the series, where Bridget attempts a bobsled run, pets a shark, and is saddled with "guide" Mark, who's clearly smitten with our host. 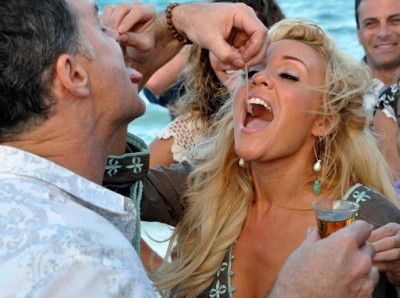 Must've been the start of sweeps: Bridget receives a full body massage in this episode.

Playmate Amber Campisi arrives to help Bridget suck down a flaming drink, go horseback riding, and do some rafting.

Bridget downs some Vegemite, climbs the Sydney Harbor Bridge, and gets a face full while sand tobogganing.

Playmate Pilar Lastra helps Bridget enjoy the sights and smells of the culture.

The episodes are presented in anamorphic widescreen (1.78:1 aspect ratio), and while the set could use an HD companion, the DVD manages to provide a soothing visual experience, representing the locations visited satisfactorily. Colors are strong with crisp ocean views and blinding sunshine, and the ample skintones are well-preserved, always lusty and bare. Again, Blu-ray seems the proper home for a show like this, but what the DVD offers is sufficient, recreating the cable presentation comfortably.

The Dolby Digital 2.0 mix is nothing to get excited over. It's a basic audio recreation of the show, with a workable frontal force that pushes forward Bridget's narration and the cheapy scoring that accompanies her adventures. It's thin, but it's television. Conversations are easily understood throughout. 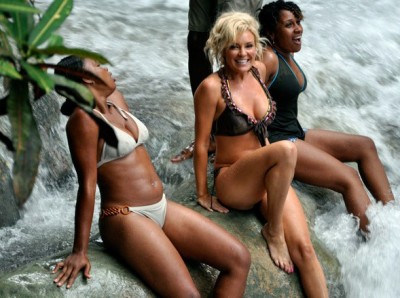 "Bikini Blast" (12:42) basically cuts to the chase, assembling swimsuit footage into one supplementary offering to help those who can't stomach the show.

"Turn-Ons" (34:32) isolates what I would consider to be the weakest element of the show: the closing rundown of Bridget's travel highlights. That said, if there's little time to absorb the entire series, this collection of memories is a nice overview of the show's execution.

This show is not science. It's harmless ogle fodder wrapped up tight in travel show formula that aims to take the viewer to lands far and wide, with a petite, airy blonde as the ringmaster. "Bridget's Sexiest Beaches" is a merry distraction, and I'm sure it was never meant to be a vessel of rigorous education. Relax and enjoy the jiggle...I mean journey. Enjoy the journey.