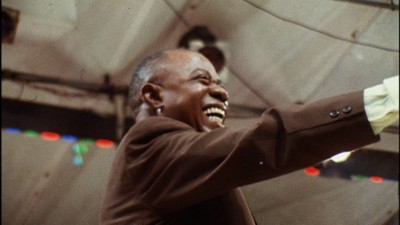 In 1970, Louis Armstrong went to the Newport Jazz Festival as a special guest to perform his own set, but also to be honored by friends and admirers on the occasion of his 70th birthday. Louis Armstrong: Good Evening Ev'rybody is a document of that event, a collection of interviews, backstage rehearsal footage, and performances. It's footage that had remained unreleased until now. The concert film is an amazing discovery, a surprising time capsule that needed to be unearthed. This new DVD was mastered in high-definition, struck from the original 16mm film elements, with a restored soundtrack that is a true blessing to the audience, taking us as close to possible to hearing what the music would have sounded like had we actually been there.

The first part of the concert is devoted to performances by Armstrong's band and his regular collaborators, folks like Ray Nance, Jimmy Owens, Bobby Hackett, and Wild Bill Davison. The tributes are loving and light-hearted, including a humorous take on "I'm Confessin'" with Dizzy Gillespie doing a spot-on impression of the bandleader, ending with the whole band chiming in for the big finish, each doing their own Louis. It's humor born of respect, and the admiration is mutual. Between each song, Armstrong explains to the camera who each of the players are, what makes them unique, and why he rates them amongst the best. He also talks about some of his own history and the philosophy behind his music. The man is self-effacing and humble. When he shares a little about how he writes his songs, he concludes the explanation with, "That's all. No big deal." You can tell that's exactly how he feels about himself, even if everyone around him knows he's a legend.

Once Armstrong takes to the stage unannounced, the audience goes nuts. He slips comfortably into "When It's Sleepy Time Down South," his signature tune, cued up as his entrance. The singer is on point right from the first note, a consummate performer, his stage presence as tremendous as his unique voice. He ends the song with a humorous vocal joke, a smile, and his regular greeting, "Good evening ev'rybody." Armstrong follows this with "Pennies from Heaven" and "Blueberry Hill."

The marvelous Mahalia Jackson is welcomed for a shift into gospel, yet another tradition that Louis Armstrong was a part of. She sings "Let There Be Peace on Earth" with minimal instrumentation, her powerful voice nearly burying what music is there. It's interesting that in this segment, Armstrong talks about tradition, but also reveals how open he still is to hearing new music. He mentions having just bought Let it Be by the Beatles, and how the title track is just as much in the gospel convention as it is anything else.

Jackson sings four songs in all, with Louis joining her to finish the last, "Just a Closer Walk With Thee," giving the finish a New Orleans big band flourish, setting the stage for the birthday boy to take over once more. This expanded band eases right into "When the Saints Go Marching In," with Jackson this time backing up Armstrong. Louis then finishes the set with one of his biggest hits: "Mack the Knife." "Mack" is the jauntiest song about a murderer you're likely to find. Armstrong's rendition makes the bad guy sound positively romantic! On the flipside is a song without a hint of malevolence; quite the opposite. Though the concert is over, the film finishes with rehearsal footage of "What a Wonderful World." This most famous of tunes has lost none of its grandeur over the years. It is at once both easy and expansive, the true definition of a feel-good hit. It's too bad that we never see the master pick up his trumpet, but it's a small complaint when he's got such talented people standing behind him. (Armstrong had been sick prior to the show, and that was why he did not play; Bobby Hackett was his personal choice for a replacement and had backed him up for years.)

Louis Armstrong: Good Evening Ev'rybody is as unassuming as its subject. It would have been easy to slap some commentators in there and spend a lot of time talking about how important the event was, but that would fly in the face of everything Louis Armstrong is about. This is a glimpse at the man doing what he did best: providing entertainment and creating a good time for everyone. He'd probably laugh if he read how much I am shining the apple here, and never once question whether he deserves the praise or not. He does, of course, and as far as apples go, Louis Armstrong: Good Evening Ev'rybody couldn't be more tasty or nutritious. 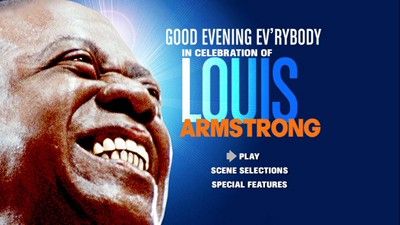 Video:
As noted above, the 1.78:1 anamorphic transfer on the DVD for Louis Armstrong: Good Evening Ev'rybody was made from original film elements, and the picture quality is nothing short of miraculous. The color tones are rich and indicative of the film stock from the period, and the resolution is great. There is some dirt and spotting at times, but nothing we shouldn't expect from a vintage film such as this. For something that had once been lost, finding it again has yielded impressive results.

Sound:
The soundtrack is mixed in Dolby Digital, and despite being in mono, still has incredible nuance. According to the liner notes, Richie Weigle and a company called Trackwise undertook a tremendous clean-up effort with the source audio, and it shows the kind of work guys who know what they are doing can pull off. For a good example of the audio quality, listen to the end of Mahalia Jackson's last song, "Just a Closer Walk With Thee," when she steps away from the microphone and we can still hear her singing. Compare the subtlety there with the way the audience applause is layered over the music, and you can hear how conscientious the audio team has been.

Extras:
Louis Armstrong: Good Evening Ev'rybody is packaged in a regular-sized DVD case made out of clear plastic. Liner notes by producer Albert Spevak are printed on the inside front cover, and they explain a little about the history of this project. This is expanded on in the special feature "The Story Behind the Film" (14 minutes, 18 seconds). George Wein, one of the directors of the movie, talks about being there, about knowing Louis, what the goal of the concert was (it was essentially Armstrong's last hurrah), and the road from there to here. There's a little extra footage shown, and Wein talks about the interview pieces, which were shot after festival at the performer's home in Queens.

Two new featurettes are essentially deleted scenes. In "When It's Sleepy Time Down South" (4:30), the singer tells us why it's always his opening number and blesses us with an a cappella rendition of the tune. We also see him rehearsing it with his band. "Preservation Hall" (8:10) has more interview footage, with Armstrong talking about one of the great performance spaces in New Orleans and all the great people that played there. This is followed by more footage from the Preservation Hall Jazz Band, who also back Louis in the main film.

FINAL THOUGHTS:
Louis Armstrong: Good Evening Ev'rybody is a marvelous treasure on display to the world for the very first time. This documentary about Louis Armstrong's appearance at the Newport Jazz Festival in 1970, celebrating his birthday and performing alongside his many friends, is both an excellent concert film and a great tribute to music. Highly Recommended. 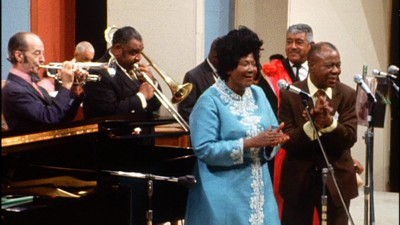