Men Who Stare at Goats, The 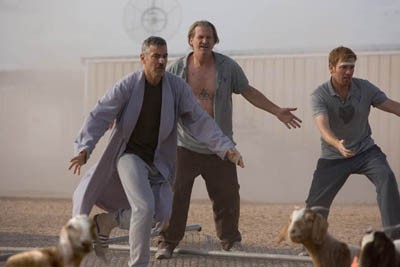 Written by Peter Straughan (How to Lose Friends and Alienate People) from a book by Jon Ronson (who gets his name changed to Bob Wilton for the trouble), The Men Who Stare at Goats aims for the territory somewhere on a comedic map where the madcap films its star, George Clooney, has made with the Coen Bros. crosses borders with the actor's own directorial effort, Confessions of a Dangerous Mind. It's a playing field the director, Grant Heslov, should be familiar with, having produced Intolerable Cruelty and Clooney's last picture, Leatherheads. Unfortunately, though funny and often quite brilliant, The Men Who Stare at Goats doesn't quite stick the landing.

The fictionalized Bob Wilton (played by Ewan McGregor) works for a small paper in Ann Arbor, Michigan, stuck doing crackpot fluff pieces like interviewing "remote viewer" Gus Lacey (Stephen Root). Gus insists he can undertake out-of-body journeys thanks to special ops Army training, part of a secret program called New Earth. Bob thinks nothing of it, too focused on the fact that his wife is leaving him for his editor and that a new war is being kickstarted in Iraq. Determined to prove he's no milquetoast, he heads to the Middle East, getting nowhere until he runs into Lyn Cassady (Clooney). This twist of fate proves fortuitous: Cassady just so happens to be the top psychic soldier Gus had told Bob about.

Lyn quickly reveals, and we see through a series of spliced up flashbacks, that New Earth was the brainchild of a hippy-dippy officer named Bill Django (Jeff Bridges). Conceived as a non-lethal combat philosophy that would foster peace rather than war, the New Earth soldiers, referred to as Jedi warriors, used astral projection to survey battle scenes and the power of suggestion to bring calm to their enemies. They also could stop an animal's heart just by looking at it.

Finally, Bob has the story he has been waiting for, and he convinces Lyn to let him tag along as the Jedi goes into Iraq. The more he hears about Lyn's time in New Earth, the less believable it sounds, and the more Lyn screws-up, the less likely it seems that his special mission is for real. 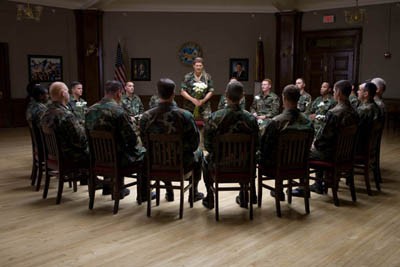 If ever a movie should not reflect the journey of its characters, The Men Who Stare at Goats is it. Just as Bob has made a bad choice following Lyn into a combat zone, so too do the filmmakers take some wrong turns along the way. Jon Ronson's book was based on a real investigation, and when Heslov's film sticks with that notion, that this is a story about finding out what really went down and what the men of New Earth are doing in a desert war twenty years after Bill Django was kicked out of the Army in disgrace, it's very entertaining. But then that ugly third-act structure rears its head and the filmmakers try to paste a redemption arc on the narrative. Suddenly Goats shifts out of being a comedic re-creation of actual events and turns into a conventional comedy where the villain gets his comeuppance and the hero finds his true destiny. In other words, it stops being something we've never seen before and turns into a movie we've seen a million times.

It's a fairly disappointing swerve, particularly given the caliber of this cast. Ewan McGregor is predictably charming as the disbelieving everyman, and George Clooney has perfected the art of being the buffoon. Likewise, Jeff Bridges is smartly cast as the stoner and Kevin Spacey is oily and vain as Lyn Cassady's psychic rival, Larry Hooper. Though Heslov doesn't know how to keep the pedal all the way down, he does keep Goats moving fairly quickly so that it never settles too long on one thing. It could stand with a little more sizzle, though, amping up the tone to take the material farther. For as outrageous as Lyn's claims are, the movie stays pretty close to the earth.

That assessment gets pretty close to the one thing, if I had to point my finger, that keeps The Men Who Stare at Goats from being all it can be: a lack of true investment on the part of the filmmakers. There is never a sincere effort to make us believe that these self-proclaimed Jedi warriors are anything but crackpots. This means there are no reversals in the film, no instance where Bob starts to be taken in by the rhetoric and then no crash to reality. If that had happened, the forced resolution might seem a little more plausible, or at least more acceptable as a structural conceit.

Still, even with the final act problems, I generally enjoyed The Men Who Stare at Goats. It is not the movie the trailers promised, and from what I gather, not necessarily the flick fans of the book might have hoped for, but it's still smartly made and performed with skill. Even if it's not a triumph, it gets the job done.