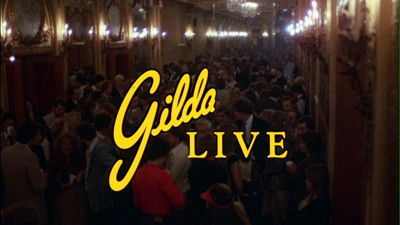 During the summer of 1979, during her hiatus from Saturday Night Live, Gilda Radner performed a live Broadway show featuring many of the popular characters she had invented for the subversive late-night comedy series. Produced and directed by SNL-mastermind Lorne Michaels, Gilda Live was a big hit with audiences. The year following, a film document of the comedienne's showcase, captured by legendary film and theatre director Mike Nichols, was released. Apparently, the reaction at the box office was lukewarm, the novelty of the live act not really translating to celluloid. I assume Gilda Live's questionable popularity is what caused it to be relegated to the Warner Bros. Archive Collection, their on-demand online initiative, rather than a full-blown DVD release. This may be too bad in terms of those not in the know discovering the genius of Gilda Radner, they aren't going to stumble on Gilda Live at their local rental establishment, but it is a boon to existing fans who can now revisit this rare glimpse of the much-missed performer at work.

Gilda Live is Radner's Broadway show front to back, with little embellishment and no pausing for context. Radner and Michaels have set this up as a variety show, roping in the female trio Rouge and then-SNL and current David Letterman band leader Paul Shaffer to back the actress up. The skits alternate between non-musical and musical numbers, each piece featuring a different character, and though most of the personas had been used by Radner on SNL, the material here is new to the show. We get all the age groups: the very young and hyperactive Judy Miller, the nerdy adolescent Lisa Loopner, the cranky adult Roseanne Roseannadanna, and the much older and crankier senior Emily Litella. Radner treats us to her riff on Patti Smith, the rock 'n' roll disaster Candy Slice, as well as her Jewish-American princess version of the 1960s girl group, Rhonda and the Rhondettes. Perhaps more importantly, we get to take peek behind the act and see Gilda Radner as herself, speaking directly to the audience in the monologues that open and close the show. In the beginning, she tells us how as a child she always wanted to be the one on stage, because the people on stage always looked so happy to be there. It's clear in Gilda Live that Gilda Radner was happy to be there, too. 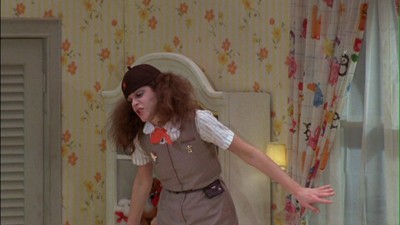 In between some of the skits, Father Guido Sarducci, the alter ego of performer Don Novello, takes the stage to entertain the crowd with his wry humor and give Radner time to change. Surprisingly, the Sarducci act hasn't grown at all stale over the years. He's still as funny as ever. Perhaps it's the unbending nature of his target, the religious side of life rarely changes.

As a director, Mike Nichols is intent on chronicling the happening. He shoots much of Gilda Live so that the edges of the stage are visible and regularly cuts to the audience. In this way, Gilda Live is more like a concert movie than a filmed version of a Broadway play. Nichols even takes his camera backstage, showing us some of the chaos that goes on between sketches, sometimes doing so while Sarducci or Shaffer are still on stage, keeping everything in real time. In this way, the performance is always front and center, we're never asked to step inside the fiction the way we might with a more conventional film. This is a plus in terms of seeing Radner at work, really walking the high wire and giving it her all on stage; it's a negative, however, in that the maintained distance is probably the biggest reason cinema audiences never really engaged with Gilda Live. We're never allowed to forget that we weren't there, that we're only peeping in from outside the theatre.

I can see why Nichols chose to shoot Gilda Live the way he did. The most potent aspect of the Gilda Radner charm is the joy she garners from performing, and that is evident in every frame of this film. Radner never lost that early child-like wonder of show biz, which is probably why she was so good at playing children herself. Even when the material fizzles, or when the filmmaking aesthetic isn't serving her as best it could, that Radner glow shines through. Decades later, there is still something warm and charming about seeing Gilda go at it. Even if Gilda Live is more of a time capsule than a sensational piece of cinema, it's a time capsule worth opening. 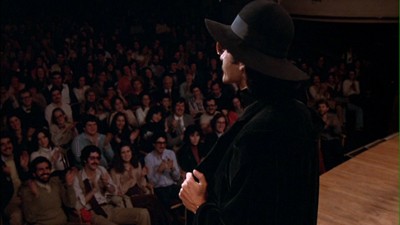 Video/Packaging:
The Warner Bros. Archive Collection is a direct-to-order line set up by the studio to release some of their back catalogue in a no-frills package to collectors. Fans pay a premium full-retail price to get a movie they can't otherwise get; the downside is that there is some skimping to keep costs down, which may strike some as backwards since the consumer price is up. This skimping includes recording the movie on a blue-backed DVD and printing the cover on cheap stock and what looks like a standard color printer no different than most of us have at home. There is also an on-demand download option, slightly cheaper. The set-up on all the discs is a functional "play the movie" menu and that's it. Chapter breaks are every ten minutes, not scene by scene.

Despite not having been given much attention, the video transfer of Gilda Live must have come from a pretty good source, as the image is mostly clean and the colors look really good. The video footage is very much of the time, and the look of the movie is more documentary than a movie shot on a studio set. The DVD presents the film at a widescreen 1.85:1 anamorphic ratio, and the look of the disc is solid.

Sound:
The movie is mixed in Dolby mono, and it's sharply mastered even if there are no fancy options. There is no hiss or extraneous noise, the pitch is always crisp and clear.

There are no subtitles

FINAL THOUGHTS:
Recommended. Where Gilda Live fails as a movie, it succeeds on the sheer vivacious gusto of its star. Gilda Radner was a joyful performer who put everything she had into her shows and the characters she played. Director Mike Nichols misstepped when he chose to shoot her Broadway show without erecting any fourth wall, but the mistake of thirty years ago means we have an accurate document of what it was really like to see Gilda Radner back in the day. Trotting out her most popular characters, and letting her personality be the star, she and her cohorts give the audience exactly what they bargained for: a fun night out at the theatre. 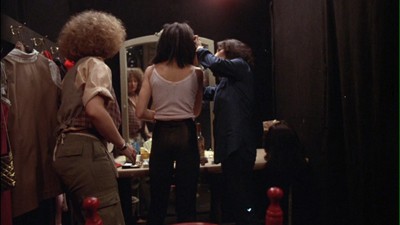